One should not read too much into a single case, of course: but not too little either. A 24-year-old man in England called Lee James was sentenced to life imprisonment for having kicked the head of his victim so many times (while shouting “Have some of that!”) that he died. Then he and a neighbour dragged the body to a public place, doused it in white spirit and set fire to it.

The dead man was called Bijan Ebrahimi, an immigrant from Iran who had become disabled through disease of his back. He was subjected to a long campaign of abuse by neighbours who accused him of being a paedophile. This was because Mr Ebrahimi filmed some local children destroying his flower-pots and also James drinking and smoking while in charge of one of his children on the lawn just outside his, Ebrahimi’s, window.

James complained to a passing police patrol of Ebrahimi’s “paedophilia”, and though James almost certainly had a criminal record, was known to be a violent “partner” of the mother of his children, and had a visage of inspissated malignity that could have been used by Lombroso as evidence for the plausibility of his theories, the police arrested Ebrahimi, who had long complained to them about the abuse he had suffered from James and others. James, who openly threatened that he would take the law into his own hands if something was not done about Ebrahimi, told the police that he was prepared to go to prison if he attacked Ebrahimi, and that his children would, when they were old enough, be proud of what he had done to protect them. A mob of local people cheered and shouted abuse as Ebrahimi was taken away by the police.

Ebrahimi was released without charge, the police having searched his phones and computer for incriminating material, and returned home. Soon afterwards, he filmed James threatening him in a terrifying way (three days before James killed him); Ebrahimi complained to the police several times and the very day before James killed him sent the police an e-mail telling them that he felt unsafe. The police ignored all these cries for assistance. The fact is that when respectable people from a poor area call for help, our police always have paperwork to do that needs their more urgent attention. In effect the police are on the side of the wrongdoers.

James locked his “partner” and his children in the house while he was killing Ebrahimi, and on his return said that the problem had been “sorted”. When the police came to arrest him, he said, “I bet this is about that f***ing paedo.” James later told the police, “I had so much anger in me, I just wanted him to leave my girls alone”: his girls on which Ebrahimi had not so much as laid a finger.

The human mind is a subtle instrument, capable of the most astonishing feats of bad faith, not only individually but in epidemic proportions. When Lee James was killing Ebrahimi he must have been aware that his anger was bogus, that he was angry with Ebrahimi not because he was a paedophile, for which there was no evidence whatever, but because he dared to criticise and was opposed to the psychopathic mores that reigned in the area in which he had the misfortune to live (as they now reign in so much of England), mores in which James himself fully partook. And he must also have known that it was his bogus indignation that allowed him to enjoy killing Ebrahimi with what he thought was a clear conscience.

Moreover, as I learnt from speaking to a thousand Lee Jameses, he was fully aware that he would not have had contact with his children for very long: that their mother, to whom he was violent, would at some time in the near future refuse to have anything further to do with him; that she would take another “partner” or series of “partners”, one or more of whom would sexually abuse his children; and that she would allow him, Lee James, no access to his children not because he was a bad parent (though obviously he was that), but because the latest “partner” would turn any contact with him into a casus belli, that is to say an excuse for violence against her. James would contribute nothing to his children’s upkeep, except an occasional pair of shoes or some such, purchased not because the children needed to be shod but to give him an excuse to have access to his former “partner” who was committing lèse-majesté by consorting with another “partner”, or “partners”, and who therefore needed to be taught a lesson in fidelity. And he would know all this because, in his experience and social environment, it was the (or at least a) standard pattern of child-rearing. Mr Ebrahimi was a witness to what was done around him, and therefore had to be driven out or neutralised. 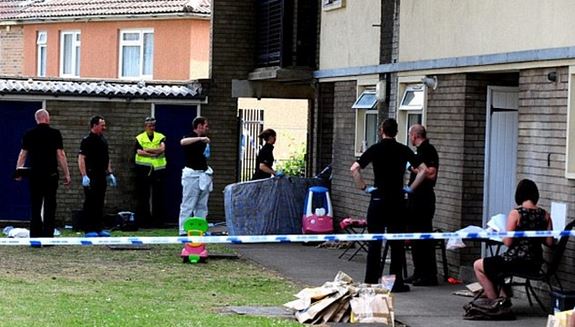 Finally, but too late, British police do their job at the home of Bijan Ebrahimi

Lee James would be perfectly aware, in at least part of his consciousness, that Ebrahimi was his moral superior, which was why he had to turn him into a monster so beyond the pale that he could rightfully be killed. And the mob who hurled abuse at Ebrahimi during his arrest were of the same ilk. In Britain, when an alleged paedophile is brought to court, a mob of slatternly mothers with their infants in tow gathers outside the court to scream their hatred at the defendant and beat their fists on the police van that transports him, apparently unaware that to expose small children to such a terrifying scene is itself a form of abuse. And yet, spoken to individually, it is not difficult to get them to recognise that their way of life is such as no child should have to experience, and which they would not want their children to imitate when they grew up. In other words, the mob is full of self-hatred and is right to be so.

This has all come about for a number of reasons acting in concert. The social security system in Britain makes it possible, and perhaps even profitable, for parents such as Lee James and his “partner” to bring children into the world without as much as a moment’s thought as to whether they can support them by their own efforts. Come what may, the state will always be father to the child. But far more devastating has been the ideological gestalt switch that has taken place, so that what was once socially respectable has become socially despicable, and what was reprehensible has become laudable. The problem with Ebrahimi was that he was too judgmental, not multicultural enough: he did not realise that beating your partner and drinking while pushing your infant in a pram is part of modern British culture, which he therefore should have respected more.

The transvaluation of all values in Britain is not confined only or even mainly to the class of which Lee James was a member. A few years ago I was the de facto vulgarity correspondent for a newspaper whose opposition to vulgarity was inconsistent, to put it mildly. The newspaper would send me to wherever a British crowd was gathering and behaving in a vulgar way—which was practically everywhere a crowd gathered.

I was sent to watch a football match to report on the crowd behaviour. The seats are now so expensive that football has become a middle-class game, at least for spectators who want to watch it live.

Next to me was a man with a son of about eleven. He seemed to be decent enough, fond of his son and generally well-behaved. Then suddenly he stood up and started pointing repeatedly at the opposing fans, extending his arm in a near-fascist salute (soccer may now be defined as the continuation of fascism by other means). He started to chant with an intonation of real hatred, “Who the f*** do you think you are, who the f*** do you think you are?” I need hardly say that the opposing fans replied in kind. Fortunately the two sets of fans were kept apart by an army of police, who were not answering calls from such as Mr Ebrahimi.

Is this how he wanted his son to see him, I wondered; is this the example he wanted to give? It is only an anecdote, I know, but when an anecdote is one of a hundred or a thousand instances, it ceases to be a mere anecdote.

Anthony Daniels’s latest book, published under his pseudonym Theodore Dalrymple, is the essay collection Out into the Beautiful World (New English Review).

4 thoughts on “The Sins of the Fathers”

Authoritarianism in Cement and Steel