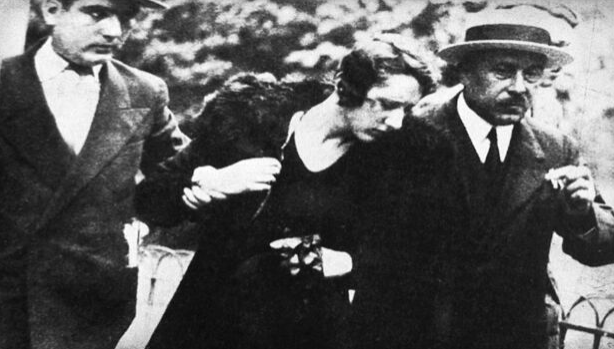 Passing the Lycée Voltaire in Paris recently, I was mildly irritated to see its rather grand building draped with large hangings on which were crudely drawn portraits of women accompanied by the legend, “No revolution without women!” It is, of course, the sesquicentenary of the Paris Commune, and revolution still enjoys an intellectual cachet in France irrespective of its actual effects or outcome, as being a good in itself. This is strange, because the French are in many ways deeply conservative and opposed to change, especially when it comes to their personal privileges. It means that reform is difficult and explains why France has long periods of immobility punctuated by convulsion.

As a matter of idle curiosity—most of my curiosity these days is idle—I looked up former pupils, or as we must now say, students, of the Lycée, and by far the most interesting of them was Violette Nozière (above in custody), whose claim to distinction was that she was a parricide. I at once sent away for a book about her.

She was indeed a most interesting figure. The only daughter of a railway worker and seamstress, she long dreamed of a more glamorous and prosperous life than that of her parents. Her principal hope of achieving it, at least quickly, was by frequenting the bars of the more fashionable quarters of Paris, where she hoped to meet either those whom the Spanish call señoritos, or elderly men of means looking for female companionship.

At about the age of seventeen, in 1932, she contracted syphilis. Worried about how she was going to inform her parents, her doctor advised her to tell them that her form of the disease was hereditary and that it could skip a generation, thus deriving from the generation before hers. He also provided her with a certificate of virginity. But though her parents, who were doting, simple and naive, believed her, they grew ever more alarmed at her wayward behaviour, which they tried to control. She stole money from them and told elaborate lies as to where she had been, inventing friends and invitations; one day they found a love letter from the one young man, a student, whom she did actually love and wanted to marry.

She made at least two attempts to poison her parents before her third and final attempt. She forged a letter from her doctor telling them to take the prescription he had written for them to cure their potential syphilitic taint—or else. Astonishingly, though they knew that Violette had tried to poison them before, and that it was she who delivered this strange, unexampled missive from a doctor whom they had never consulted or even set eyes upon, the father drank the powders Violette dissolved for him in water and the mother half of her dose before refusing to take any more, mainly because they tasted so bad. The powders consisted of salt and barbiturate.

When Violette thought they had taken enough to die, she removed the money that she knew her mother kept close to her in her clothes and she went out to enjoy herself. On her return, she turned on the gas to make the situation appear like an accident or suicide pact and called a neighbour. She then ran away; but in fact her mother, unlike her father, survived.

It was not long before her picture was widely distributed and one of the young men who picked her up soon recognised her. When he made a further assignation with her, she was duly arrested, the police having been forewarned.

At her trial, Violette alleged that the reason she had killed her father was that he had sexually abused her since the age of twelve and had said that he would never permit her to marry because she was “his”. Some believed her, most did not. She was the object of so much violent hatred, especially by women, that special precautions had to be taken so that proceedings should not be disrupted by calls for her death.

The jury found no extenuating circumstances and she was sentenced to death. The president of the time, Albert Lebrun, commuted the sentence to hard labour for life; Philippe Pétain reduced it further to twelve years’ hard labour; and Charles de Gaulle removed the condition of her release that she could never again live in Paris. Thus, her penalty for her crime was reduced by three successive heads of state.

Although her mother had said at her trial that she would never forgive Violette until she (Violette) was dead, she was reconciled to her. In 1937, Violette publicly withdrew her allegations against her father, which she said she had completely fabricated, though some thought that this was motivated only by the desire to bring comfort to her mother and thereby improve her relations with her.

At one time, Violette said she would take the veil after her release. From having been an adolescent rebel, she became a model prisoner. She was still young, and the son of one of the senior employees of the prison fell in love with her and married her after she was released. She bore him five children. He became a hotelier, but unfortunately died of the consequences of a road accident aged forty-two. She subsequently brought up the children alone, running a restaurant to earn her living. When she was forty-seven, however, it was discovered that she had breast cancer, of which she died four years later, mourned by her children and her mother. She was buried next to her father.

Was she abused by her father, and if she was, would that have extenuated, or even excused, her murder of him? The account she gave of the abuse was certainly remarkably similar to accounts that have emerged since but were then uncommon. She had motives both for making and withdrawing the allegations. If he had abused her, why did she also poison her mother? She had a motive to kill her parents and make it appear like suicide: she would have inherited enough money to live the high life for a time, as she was so desirous of doing. And would she have wanted to be buried next to her father had he abused her as she described? In the meantime, however, she had become deeply religious; having benefited from forgiveness herself, was she prepared at the end of her life to extend it to others? The unquestionable truth of this matter will surely never be known.

What is the moral to be drawn from the complex story of Violette Nozière? One important lesson is that human character is not necessarily fixed by the age of eighteen, the age at which Violette committed her murder. All of us, I should imagine, have known of adolescent children who were the despair of their parents and yet who turned out very well. On the other hand, there are some such who continued on the downward path to perdition. Violette had the stigmata of the psychopath—she lied, stole, exploited, sought sensation, could stick at nothing, was ruthless and without remorse—for several years, and yet turned out very well.

The book on the case by Jean-Marie Fitère that I bought soon after passing the Lycée Voltaire was published in 1975, at a time when capital punishment was still a matter of deep controversy in France. Not surprisingly, perhaps, the author uses the case to make a point against the death penalty:

One shudders to think that if, in 1934, the death penalty for women had not been abolished, Violette Nozière would  have been executed, taking her prodigious capacity for repentance and redemption with her.

I am against the death penalty, but not for this reason, which seems to me to mistake the purpose of punishment and indeed of the whole criminal law.

Of course, it is a very good thing if people do repent and reform. And the statistics suggest that most law-breakers either reform, or at least eventually refrain from committing further crimes (unless they also improve at evading the law). But the criminal law is not principally therapy for criminals, as exposure therapy is for those suffering from arachnophobia. If it were, immediate repentance after committing the most terrible crimes would be as good as repentance at leisure, which clearly it is not. If, say, Himmler had said, “I now realise that mass murder is terribly wrong, and I will never commit it again,” would one conclude (even if one believed him) that punishment was therefore supererogatory? I think not. But this is not the same as saying that Violette Nozière should have been more harshly treated. Penology is not, and can never be, an exact science.