Opinion as the Touchstone of Virtue 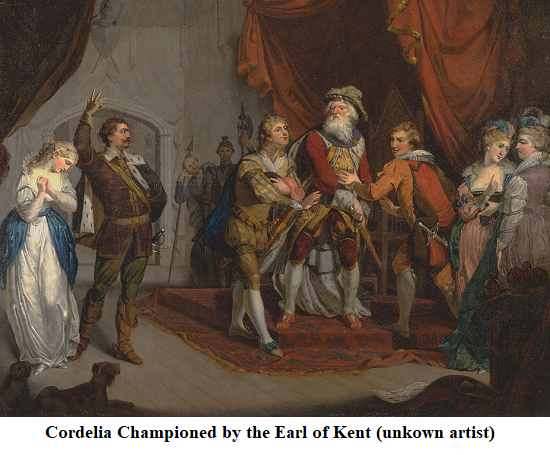 On approaching a Shakespeare play, or at least some Shakespeare plays, I try to find a single line or couplet that illumines the whole, that tells me in some sort what it is “about”. I do not claim for this procedure any great or final validity, only a certain usefulness for myself. The question of what life is about is no doubt absurd, but we cannot help but ask it.

I interpret Hamlet, for example, in the light of Hamlet’s rebuke to Guildenstern:

You would play upon me; you would seem to know my stops; you would pluck out the heart of my mystery; you would sound me from my lowest note to the top of my compass.

Guildenstern would pluck out the heart of Hamlet’s mystery, but he can’t: and he can’t not because he is incompetent, insensitive or lacking in intelligence, but because there is a mystery at the heart of human existence which cannot be plucked out. Hamlet cannot pluck out the heart of his own mystery, let alone anyone else’s, and yet is condemned to try. From the necessity of the impossible stems the tragedy, or perhaps disaster would be a better word for what happens in the end.

The lines that are for me the key to King Lear are Kent’s warning to Lear:

Thy youngest daughter does not love thee least,
Nor are those empty-hearted whose low sounds
Reverb no hollowness.

Lear ignores this warning, and by doing so brings forth the final disaster. He does what Hobbes warns us not to do: like Hobbes’s fool, he takes words for money.

Kent’s warning is particularly apposite today, because we live increasingly in a world in which words and words alone are the measure of all things, especially vice and virtue. A good person is one who espouses the right opinions, and an even better one is someone who trumpets them. The converse is also true, that a bad person is one who does not have the right opinions, and an even worse one is someone who trumpets the wrong opinions.

Another advantage of making opinion the measure of virtue and vice is that it frees man from the restraint and discipline that were traditionally necessary to be considered a virtuous person. Think and say the right things, and you are free in many spheres of existence that formerly were subject to rules. One great exception to this, perhaps, is in the matter of diet: in my little town in England, there is a shop called Ethical Living, in which virtue is reduced to eating organically-grown seeds and other plant products. I have nothing against seeds and plant products—in fact, I rather like them—but I do not flatter myself that by eating pine kernels I am being good.

No doubt every philosophy of life has its anomalies, but what may be called the logocratic conception of virtue (the espousal of the right words as the measure of personal moral worth) is especially rich in them. Usually, this modern overemphasis on opinion both decries censoriousness and is highly censorious, particularly about the censoriousness of others: a meta-censoriousness, as it were.

Thus, a person who believes that it is wrong for someone voluntarily to drug himself to the point of intoxication, or who decries the various forms of self-mutilation that are now extolled as a liberation for self-expression, thereby reveals himself to be censorious and intolerant, tolerance now being taken to be a willingness to condemn nothing except condemnation itself, perhaps with the “celebration” of behaviour that deviates transgressively from former social norms. The expropriation of the expropriators has been replaced as a political desideratum by the censure of the censurers.

The fear of appearing censorious soon leads to fear of making moral judgments of any kind, but especially if they are of a straightforward, immemorial or conventional nature. This is profoundly liberating in a certain sense, for it liberates not only others but the self who refuses to make the judgments: one must not be censorious towards oneself either. In the words of magazine psychology, you must learn to accept and love yourself, whatever you might be and whatever you might do. I had many patients who thought that learning to love themselves was an educational task a little like learning the subjunctives of some foreign language.

But to return to Kent’s warning to Lear not to take words at face value or to assume that they bear only the most literal interpretation. As I have mentioned, this is a lesson to be relearnt today that is particularly apposite in a culture in which opinion is almost the sole touchstone of virtue. One of the consequences of this shallow conception of virtue is an almost inevitable inflation of expression: a verbal arms race in which extravagance of expression is taken as evidence in itself of the depth of feeling and therefore of virtue also.

A striking example of this is the case of the American professor Uju Anya, who publicly wished the Queen, shortly before she died, “an excruciating death”. No doubt she thought that the arrestingly vicious nature of her words would convince everyone of the strength or depth of her feeling, and possibly of the validity of the historical arguments for her evident hatred. Actually, it did the very opposite, at least for anyone with the slightest imaginative insight: it was obvious that, within the professor, was a well of unpleasant emotion searching for a pretext to be publicly expressed. The very extravagance of her words stood in the way of genuine self-reflection or real examination of the world. Her rage resembled that of the cats I saw in physiology experiments whose amygdala had been electrically stimulated to produce rage without an object.

One of Profesor Uju’s specialties, I discovered, was “critical discourse studies primarily examining race, gender, sexual, and social class identities in new language learning through the experiences of African American students”. In other words, I surmise, her job is to inculcate lasting and preferably lifelong resentment into her students, among other ways by focusing their attention on what they can’t do rather than what they can. Her job is to enclose them in a nutshell without the slightest access to the infinite space to which Hamlet refers or, to use another literary metaphor, to manufacture the mind forg’d manacles to which Blake referred in another context.

Resentment is the easiest lesson to teach and learn because no life is entirely without reason for it. This is because perfection is not of this world, at least where human existence is concerned. There is almost a natural propensity to resentment, insofar as it offers many sour comforts such as an explanation for failings and failures. No doubt there are some people who have, by exercising self-control, avoided the expression of resentment throughout their lives, but I surmise that there are almost none who have never felt it. And since resentment almost always contains a strong element of dishonesty by focusing on harms done and ignoring benefits received, inflation of language serves its end admirably. Everyone wants to be a victim, not in the sense that everyone has been a victim of something in his life, but a victim in a big way. Little slights therefore have to be magnified into gross, traumatic and lasting insults or worse, rather than a normal part of living in society. It is not surprising that an ever-greater number of people come to believe that they have been flayed alive—permanently. This is an attitude that no amount of success or privilege by comparison with others can assuage. In the midst of the greatest luxury, there is always room for resentment.

Inflation is as bad for language as it is for money. Keynes pointed out, in The Economic Consequences of the Peace (published in 1919), that monetary inflation changes the balance of economic power in a society. Inflation of language changes the balance of political power in society. It is the Gonerils and the Regans who benefit from it while the Cordelias languish. Those who fail to master the arts of exaggeration, self-dramatisation and emotional incontinence (especially when combined with bureaucratese) are sidelined politically and derided culturally, leaving the world in control of specialists in discourse studies.

5 thoughts on “Opinion as the Touchstone of Virtue”