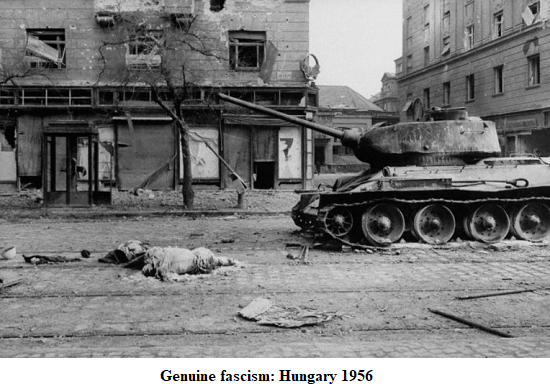 When I mentioned to some friends that I was about to pay a short trip to Hungary, they were all duly horrified. It was as if I had announced in late August 1939 that I was going on holiday in Germany.

I readily confess that my knowledge of current Hungarian politics is very limited. I know four words in the language: please, thank you, water and national. This does not entitle me to pose as an expert, even though I know infinitely more Hungarian than did my horrified friends.

There was something formulaic about their horror, if I may so put it, a bit like the sign of the cross for those who do not truly believe but yet are attached to ancient customs. They had heard that Hungary was a fascist country, the kind of country that, according to the Dutch Prime Minister, should have no place in the European Union. Of course, he took that to mean that it was not virtuous, or not virtuous enough.

I had been to Budapest several times before: it is undoubtedly one of the most pleasant capitals in Europe, grand and dignified but not overwhelmingly large. I first went in 1970, when no one was horrified by my proposed journey: it was merely a communist state, that was all, and therefore not the object of obloquy.

Even then, the food was better than in other communist countries, but the greyness and dilapidation were evident. For the first and only time in my life I had difficulty in spending all the money that I had. One had to change irrevocably a certain amount of money to be allowed to enter Hungary, and by the end of my stay I was left with a bundle of forints that I could neither change nor take out of the country (not that anyone outside the country would have wanted them).

There was almost nothing to buy: I was faced with the choice of the complete works of Balzac in Magyar, which at the time, thanks to economic planning, were easily available, or a very large bunch of roses. I chose the latter, which I presented to the lady, no doubt a trusty of the regime, in whose flat I had stayed. She was mystified by my gesture, for she had not been particularly friendly or pleasant towards me. She probably handed them in to the authorities in case she had been suspected of capitalist sympathies.

The main reason that Hungary is now regarded as fascist by all right-thinking people is that its government is popular and is carrying out the policies that quite a lot of people in Europe would like to see implemented. It is said to be authoritarian, and most of the press has links to or is owned by the government party. Broadcasting is not politically neutral, and one sees a few posters in which the government advertises or extols itself. Even people favourably inclined to the government admit that it is corrupt—as if corruption (often by communist apparatchiks turned businessmen) had been unknown before in Eastern Europe and stopped at the borders of Hungary.

As to the question of propaganda, I had just arrived from Paris, where the government and council have engaged on propaganda campaigns much more obtrusive than anything I saw in Budapest. For example, the city council, which is headed by the presidential hopeful, Anne Hidalgo, boasts about having many projects under way—2500, in fact, that is to say about one for every 1000 inhabitants. I hope I shall not be accused of undue cynicism when I say that I see in this considerable scope for corruption.

Then there are the posters of three little children of different religions and races who, say the posters, are all being taught the same stories. “That,” says the accompanying slogan, “is laicity.”

I pass over the question of whether this will, in practice, entirely please all parents. Furthermore, the poster seems to lay bare the underlying aim of multiculturalism as a doctrine, at least in European countries: namely, homogeneity (except perhaps, in restaurants; that is a form of diversity which even the worst xenophobes love).

It is the very existence of these posters, rather, that worries me. They are curiously reminiscent of communist posters, the kind that had workers of the hand and brain of all races smiling happily and reaching upwards towards the benign figure of Stalin, Mao, Kim Il Sung or Ceausescu: in other words, one feels that one is being mentally forced into subscribing to something without right of reply. This is unpleasant, even if one agrees to an extent with the basic sentiment of the propaganda.

Not long ago, the Orban government provoked outrage in some quarters, largely simulated I suspect, by proposing to pass a law outlawing the promotion of homosexuality or transsexualism in schools to children under the age of eighteen. Whether this was a wise law may be doubted; for when the electoral wheel turns (as turn it almost always does), what was previously prohibited frequently becomes compulsory.

This is no mere abstract fear. In a primary school in Birmingham, 95 per cent of whose pupils come from Muslim homes, teachers have seen fit to teach children about the glories of transsexualism, to the understandable dismay of the parents. The ideologues behind this teaching are of the view that if you do not “celebrate” some proclivity or other, or publicly expatiate on its virtues, then you must be in favour of persecuting those who exhibit it. There is no tertium quid.

Sensible or not, the proposed law was said by the president of the European Commission, Ursula von der Leyen, to strike at the very foundations or principles of the European Union. This bizarre statement seemed to have the corollary that the Union was founded for the promotion of homosexuality and transsexualism to children under the age of eighteen. Whatever one may think of the founders of the Union, I rather doubt that this was much on their mind at the time.

I do not exclude the possibility that Hungary is veering towards authoritarianism: but if so, it is hardly alone in the world in this respect. My impression of Hungary this time was that it was, if anything, freer than some other countries I could name, but I concede that I might be mistaken since I know Hungary so little. I remember being charmed by Damascus under the rule of Hafez Assad: life there seemed pleasant, normal, and even alluring at the time. From this, I conclude that political evil does not always make itself manifest at a glance, unless it takes a deeply totalitarian form (it was impossible to mistake it in communist Albania, for example), and that to conclude that all is well because people seem to be enjoying themselves in cafés, chatting to each other animatedly, is superficial to say the least.

On the other hand, I mistrust the reports that emerge in our press and in our media and which caused my friends to call Hungary a fascist country. Apart from anything else, this lazy way of decrying a country’s politics is an insult to those who actually lived under real fascism. It trivialises the past; it is like telling a person with painful disseminated cancer that you, too, know pain because you once stubbed your toe.

This misuse of language is partly due to an insistence on describing present situations in the categories derived from past situations. It is, after all, painful and time-consuming to avoid thinking in slogans. But it is the lack of a sense of proportion that is most distressing and shocking—and dangerous, for people are easily misled by words into foolish actions.

Salman Rushdie once said that whenever he compared Mrs Thatcher’s Britain to Nazi Germany, people always objected that there was no Auschwitz in Britain. By citing this, Rushdie implied that he thought that the absence of industrialised mass murder was, in the immortal opinion of Jean-Marie Le Pen, only a historical “detail”.

In like fashion, the absence of uniformed goon squads in Hungary is no evidence that it is not truly fascist. The conclusion is inescapable: some people really want there to be fascists. Without them, the world is too complex to understand.

The Odious Moral Treacle of Our Modern Pecksniffs

Commissars at the End of History