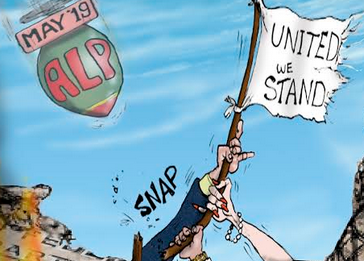 Mark Steyn weighed in on Canberra’s convulsions before the latest Newspoll, whose results bring to mind Ronald Reagan’s enduring quip about the little boy who wakes on Christmas morning to find his bedroom piled to the ceiling with horse manure. “Fantastic!” he squeals with delight, “There must be a pony in here somewhere.”

Those of conservative bent — those nurturing a vestigal optimism, that is — might hear the rustle of tail and mane in a known critic of the renewables scam, Angus Taylor, being appointed Energy Minister. Others won’t be so sure about the elevations of Black Handers Christopher Pyne and Marise Payne. Nor will they be impressed, or inclined to leave the past behind, by Prime Minister Morrison’s decision to maroon Tony Abbott on the backbench. On course for electoral oblivion and yet he pointedly omits his most effective campaigner from the mix? Yes, there’s a reason they call it the Stupid Party.

Such is the toxic legacy of the past three years that a Liberal veteran mooted only this morning in a note to Quadrant Online that Turnbull’s dark hand was at work in sweeping Abbott from contention.

“I can see him telling Morrison ‘Deploy Abbott and I resign from parliament straight away. Now you wouldn’t want a byelection, would you?’ our correspondent theorised.

True, probable, possible or false, who is to know? What such a suspicion makes self-evident, however, is that division is Turnbull’s legacy and it remains very much in effect. As Steyn notes below, the Turnbullian tumour was excised far too late to prevent systemic infection:

Malcolm Turnbull is Australia’s most famous republican, so he’ll appreciate Oliver Cromwell’s famous words to the Rump Parliament in 1653: ‘You have sat too long for any good you have been doing lately. Depart, I say; and let us have done with you. In the name of God, go!’

It’s remarkable how long it took Turnbull’s Rump to say as much to him. I wrote yesterday that, just as Tony Abbott had been toppled by Malcolm Turnbull, so Turnbull has now been toppled by Scott Morrison. And immediately a gazillion antipodean members of The Mark Steyn Club wrote to explain that no, no, Turnbull was toppled by Peter Dutton, the conservative who moved against him, but, before he could ascend the drive-thru throne, Dutton was himself toppled by Morrison, who was a so-called compromise candidate put up by frantic Turnbullites as they were being fitted for their lamppost ropes. So, if you’ll forgive the analogy, if Turnbull is Mrs Thatcher, Scott Morrison is the John Major put up to ward off Peter Dutton’s Michael Heseltine.

My old pal Julie Bishop, meanwhile, after years of serving as loyal deputy to Malcolm Turnbull, Tony Abbott, Malcolm Turnbull (first time round), Brendan Nelson, Andrew Peacock, Malcolm Fraser, Sir William McMahon, Harold Holt, Sir Robert Menzies, etc, etc, finally ran for the leadership herself, and came a poor third: She had become the Black Widow of the Liberal Party — she mates, she kills — but this time it all went awry and she shot the venom into her own leg. It’s hard to remember that in some polls of 2015, when she agreed to support Turnbull’s overthrow of Abbott, she was more popular than either man. A mere three years on from what was supposed to be a swift cleansing knife in the back, the entire party is gangrenous and pustulating.

Steyn’s column can be read in full via this link or the one below.