Tim Soutphommosane, the Labor historian and Labor Party member who was slipped into a lovely $300,000-a-year job at the Human Rights Commission during the last days of the Rudd-Gillard-Rudd era must be a very busy man. The Sydney Morning Herald invokes the big-nose Jew stereotype popular with certain German publications 80-or-so years ago (see the item below) but it has yet to hear from the man whose brief is to combat racism.

Nor has Commissioner Tim uttered a peep about some of the signs being brandished at pro-Hamas rallies in our capital cities. Signs like like this one depicting Tony Abbott in Hasidic garb , for example: 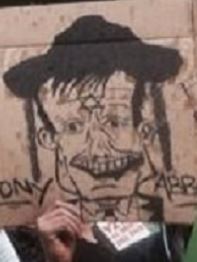 Commissioner Tim will probably get around to saying something about the eruption of Jew hatred sooner or later. It’s just that he has more pressing business, like playing with frisbees. The slogan says “racism doesn’t fly here” 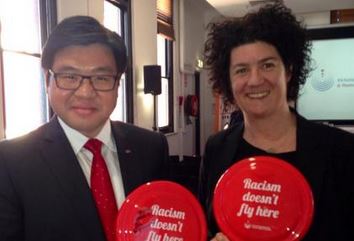 Victorians will be interested to know the frisbees are the work of the Victorian Equal Opportunity and Human Rights Commission. Their taxes are at work, sort of. Commissioner Tim may start his shift any day now.