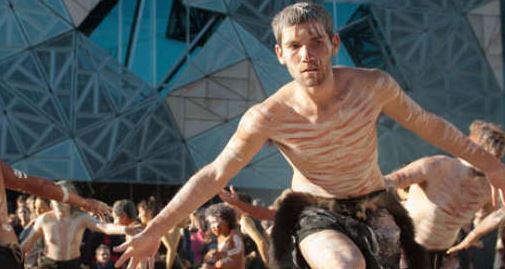 Come March, the City on the Yarra will put on its party hat for the fun of Moomba, the yearly festival of  spectacles and people on stilts which is said to represent the spirit of the celebration’s name, an Indigenous term officially translated as “let’s get together and have fun”. There is another definition, one which may or may not be accurate, but certainly opens possibilities for an annual smirk as the floats roll down Swanston Street. If you accept that other translation — and there is a solid case for doing so — Moomba actually means “stick it up your bum“.

But that’s the thing about ancient Aboriginal traditions invented yesterday, they are both wonderfully pliable and irresistibly attractive — so appealing, in fact, another get-together of Indigenous origin always kicks off the Melbourne Festival, held every year in October. Know as Tanderrum (above), it can move a certain kind of artistic soul to rhapsodies of cross-cultural exaltation. Below the words of Tanderrum’s musical director James Henry:

In the climactic finale of Tanderrum, we invited thousands of people to dance together in unison while allowing for their own personal expression, in the hope that people could feel this connective and inclusive energy. As thousands of audience members moved around the Square, each in their own way, it was clear that this energy was felt.

How very interesting. Singing, dancing, expressions of “inclusive energy” — and all this noise and movement being part of what Henry summarises as centred on “traditional songs and dances”.

But not too traditional, not if you go by the tanderrum described by William Thomas, Protector of Aborigines, whose eyewitness account is reproduced in author James Boyce’s 1835: The Founding of Melbourne and the Conquest of Australia.

The ceremony is conducted in absolute silence.

Could it be, do you think, that Judge Mordechai Bromberg has been moonlighting as a Melbourne Festival consultant and further arbiter of Indigenous  authenticity?

The artistic Mr Henry’s essay on the sources of his inspiration can be read in the fullness of its orotund obscurity via the Wheeler Centre and the link below.