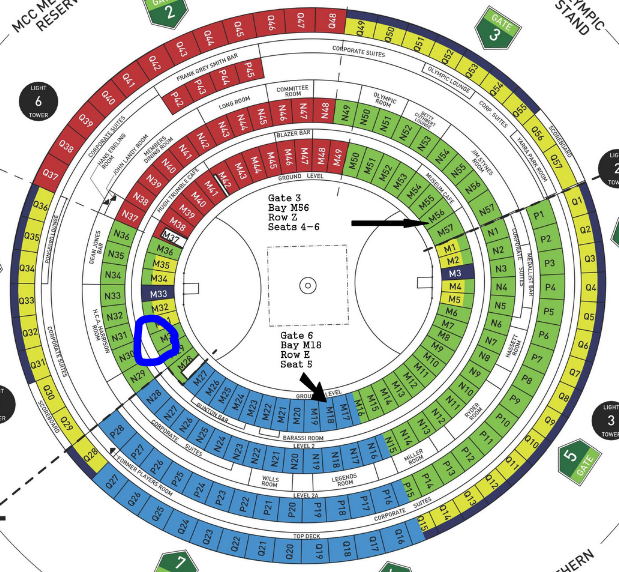 With the 2018 AFL season soon to begin, there is good news and bad for Muslim-Australian footy fans.

The good news is that the MCG prayer room, located on Level B1 and adjacent to Aisle 30 (circled above) is open for worship.

The bad news is that Muslim-Australian footy fans, like everyone else, will be restricted from leaving their cars in the parklands surrounding the Melbourne Cricket Ground. From behind its paywall, the Herald Sun reports:

CARS will be locked out of the MCG precinct for AFL blockbusters and other major sports events this year, due to fears of terrorist attacks.

No public parking will be available outside the ground in Yarra Park for marquee matches including next week’s season opener between premiers Richmond and Carlton.

The Anzac Day blockbuster between Essendon and Collingwood, a rugby league State of Origin clash in June, and this year’s AFL finals series will also be no-parking events.

Prayers have been rising from the MCG from not long after Tom Wills and his drinking buddies drew up the rules for the game and the MCG became, as the great Keith Dunstan titled his 1962 history of the ground, The Paddock That Grew. Particularly prevalent during time-on when scores are tied, prayers never until recently required a dedicated room. Indeed, the only notable reference to religion came back in the Seventies when a salvation-minded pastor posted a large sign at the front of his church urging passersby to mull the question “What would you do if Jesus came to Hawthorn?”

The response, scrawled across the poster within hours, could not be faulted:

Former Victorian premier and president of the Hawthorn Football Club Jeff Kennett would have approved of a miracle goal-kicker on the forward line, even if He chose to play in sandals. He is less keen on prayer rooms in the grandstands. His thoughts on the matter from several years ago can be read via this link or the one below.