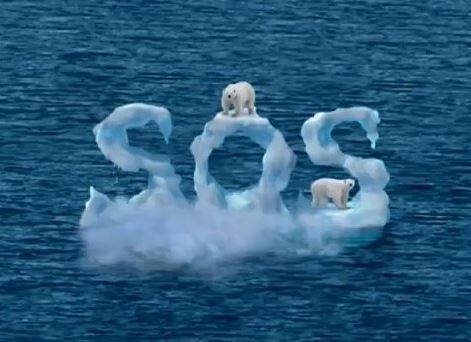 Memo to SBS: This is a doctored image, but don’t let that stop you telling the wood ducks it’s genuine.

SBS has a little show which goes to air under the pretense of being a news program, albeit with a smirking hip-dude sensibility that serves as a nightly invitation for audience and comperes to enjoy a quick sneer at those not half so smart as they imagine themselves to be. It is called The Feed and it exists courtesy of those less well connected Australians who get up every morning, go to work and pay taxes so the fruits of their labours can keep the show’s hosts on the air. This is the first thing to be gleaned from The Feed — that there is a productive class and another hooked-in, connected segment of the population which gets to leech off it.

The second way in which we can say The Feed is a valuable is that it testifies to the folly of allowing schools to become centres of indoctrination rather than of learning. Those Quadrant readers who saw last night’s episode would have understood as much some 21 minutes and 44 seconds into the broadcast, when the comperes introduced a segment on the frigid weather now blanketing Europe with ice and snow. But wait, they said, the fact that Europe is shivering is no refutation of global warming, not while there are ever-quotable “climate scientists” available to note that the Arctic is experiencing what The Feed would have its audience believe is a heatwave.

Now it is true Arctic temperatures are just now well above normal, as the graph below, compiled by professional warmist Zack Labe, demonstrates. 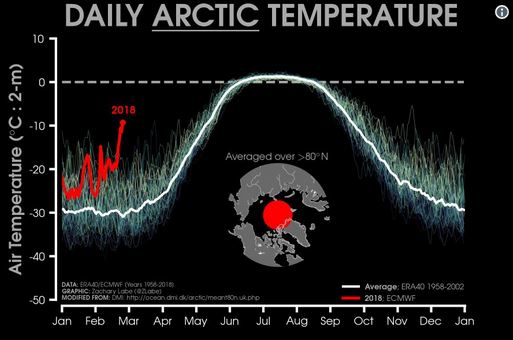 Notice, however, that even amid this unseasonable warmth the maximum temperature remains no higher than 10 degrees below freezing. Some heatwave!

But if you are a ninny with an on-camera gig, an audience of the like-minded, other people’s money to save you from productive employment and producers who are products of the same education system, well you can utter any old tosh that fits the narrative. Indeed, because your audience is every bit as steeped in smuggery, you can bare the shallowness of your own knowledge in complete confidence of never being called to account.

Thus were The Feed‘s viewers informed that

…Europe and much of the northern hemisphere has been battling through some crazy cold conditions. So much for global warming, eh? But hold your horses! Ever seen the show Wife Swap? Well according to climate scientists, the so-called ‘Beast from the East’ arctic snap is actually an air swap between Europe and the Arctic. So while Europeans as far south as Italy are busy shovelling tonnes of snow, the Arctic is crazy warm — a whopping 35 degrees hotter than the annual average.

Yeah, let that sink in.

Now let this sink in (emphasis added below and above)

…and as we all know, that makes it harder for polar bears and penguins to hunt, travel across the ice and find a safe place to breed. So, they die out. Now this is what could just be a freak event or we could be one step closer to an Arctic disaster.

The stock footage of waddling penguins and zoo-bound polar bears concluded, The Feed co-host, the one who identifies as male, ended the segment with an anxiously eloquent editorial “Oy!”

“It will without doubt have come to your Lordship’s knowledge that a considerable change of climate, inexplicable at present to us, must have taken place in the Circumpolar Regions, by which the severity of the cold that has for centuries past enclosed the seas in the high northern latitudes in an impenetrable barrier of ice has been during the last two years, greatly abated…”

Oh, and that business about temperatures being 35 degrees above “the annual average”? Well, the average 12-month temperature at the North Pole is 3.4 degrees below zero.  Add “a whopping” 35 degrees to that figure and The Feed would have taxpaying viewers believe it was a balmy 31.6 degrees yesterday. In Melbourne today (March 1), which is nowhere near the Arctic but does have penguin colonies scattered about the Bay, the temperature is predicted to go no higher than 19 degrees.

Why bother pointing any of this out? After all, two SBS airheads spewing utter crap would seem the least of the nation’s problems when both major political parties differ only by degree while preaching the amount of pain Australian electricity consumers must endure if the world is to have perfect, stable, ideal weather. Just this: while your grant-fed scientists fill the ears of our political class with peer-reviewed alarmism and the economy is hobbled as a consequence, a second tier of propagandists, exemplified by The Field‘s useful idiots, peddle piffle to products of the same school system that extruded them. The climate celebs in the top tier bag the big bucks and sound-byte influence while those in the second, your apocalyptic apparatchicks, also do well career-wise by sowing the catastropharian message in the minds of those our schools have stripped of the ability and inclination to recognise flat-out falsehoods.

Climate change is said to have many consequences. The one to be wished for is that one day, just maybe, enough politicians will find the ticker to pull the plug on fourth-rate scientific minds who have found a first-class meal ticket. A good first step would be for Senator Mitch Fifield, minister for communications and steward of both the ABC and SBS, to demand The Feed correct the record.

Likely to happen? About as likely as penguins under beach umbrellas at the North Pole on a 31.6-degree day.

For those who have the stomach to watch their taxes at work, The Feed can be viewed via this link or the one below.

Getting a grip on slime