Who to believe,
Jake or Waleed? 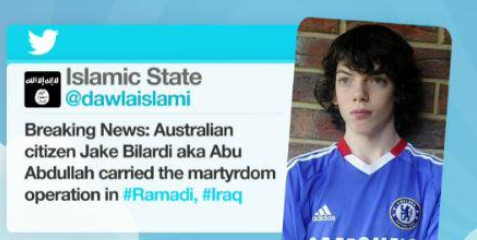 For want, as yet, of Waleed Aly laying out with his customary attention to nuance how Australians, at least those of the ABC-watching and Age-reading demographic, must regard the recent “irritations” in Sri Lanka, readers might care to consult the writings of another and somewhat less prominent Muslim thinker, young Jake Bilardi.

The Melbourne teenager, as some might recall, departed from Iraq for an imagined Paradise after failing to take any enemies of Allah with him when he detonated himself and an explosive-laden truck. That was in 2015 and, as is Facebook’s custom, his posts were taken down straight away. Quadrant Online managed to grab and copy those disturbing screeds before they vanished forever,all of them preserved here. To read them again today, with 300-plus funerals underway in Colombo and other of the island’s Christian parishes, is to gain an insight into why, whenever and whatever Waleed Aly might eventually have to contribute, the problem is and always will be Islam, most particularly its salafist stream.

Poor Jake was but a weedy runt, bullied at school and no doubt every bit the virgin as his 72 eternal consorts. Then he found Islam and, by his own sudden estimation, became a “lion of Allah”. As a former blank slate, the bloody obscenities etched by the creed he embraced on his poisoned soul are, well, let the young fool’s words speak for him. “These simple attacks,” he wrote of the slaughters in France at Charlie Hebdo and the Bataclan theatre, “have terrorised every kafir on Earth, yet the Muslims should never think that this is enough.”

…we must be relentless, never allowing these pigs a moments rest, keeping them up at night with the legs trembling in fear, wondering if they’re (sic) house is next. You may think large scale bombings or shootings are the best methods of execution but … the best method is to simply take a knife and let it meet the throats of every kafir walking down the street, this is what scares them the most, that there will rise in their lands an undetectable, undercover army attacking in suburban areas with simple tools …

… The Ummah needs to begin a relentless and ruthless assault on the kuffar in their homelands, we have brothers in every land on Earth, you may not be many in some places, such as Australia, but a Muslim with a shred of iman is all it takes to terrify every kafir dog on Earth.

When Waleed weighs in with more of his irritations, know that he will speak for himself and his take on the faith. But know also that poor Jake Bilardi, seduced and brainwashed by that faith’s very same holy books, speaks for it as well.

Readers are invited to re-visit Jake’s thoughts, and also to notice how a standard-issue earlier education in the West’s purported evils, from imperialist racism to the US trade embargo of Cuba, stripped him so thoroughly of any respect for the society in which he grew up that nothing was left but a void.

A void salafist preachers were only too happy to fill with blood-drenched sacred verses.

Look, a conservative.
Get him!

News values at Their ABC