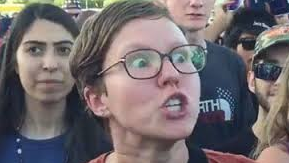 … such women sniff the wind for signs of wokeness, they compromise all principles of objective morality. Not too long ago, these same women may well have shuddered at the prospect of injecting their children with puberty blockers, but now that transgenderism is de rigueur in K-12 and pop culture, these same women will pat themselves on the back as they march their kids into gender clinics and surgeries.

The problem with following the zeitgeist winds is that they can blow in horrific directions. The psychological mechanism that drives the woke white woman of 2020 into Black Lives Matter obedience is the same mechanism that would have driven her into the National Socialist Women’s League of Nazi Germany in 1941. It might sound weird, but both appeal to the same forces: craving for status, the need for belonging, obedience to overwhelming propaganda, hatred of a common perceived enemy, terror of being lumped in with the “unfit,” fear of shunning by the in-group, and rejection of objective morality.

A final critical question is an unsettling one: Where does the woke white woman draw the line? If she can be an arsonist, a provocateur of black police officers, and an easy fit for a mob, then what else would she do? Would she be a kindred spirit with Charles Dickens’ character Madame Defarge and support mass executions of her perceived enemies? If executions turn out to be the woke thing, widely propagandized as the only solution for systemic racism, should we be the least bit surprised if she were?

The entire essay can be found here and is well worth reading in full.

The way these things work…