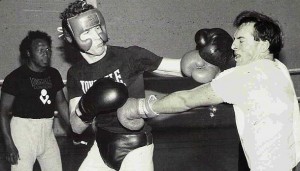 That Tony Abbott inspires in some a visceral hatred, a loathing that goes beyond mere disdain for his politics, is not open to dispute. How many other Prime Ministers have inspired a large media organisation to immediately promote a range T-shirts making the leader’s name the object of that procreative verb, the one much favoured by oafs, vulgarians and, as it emerged within a week of the 2013 election, Fairfax editors and columnists?

Since then, well,  Abbott Derangement Syndrome has become more acute. As has been variously, and wrongly, reported, if he is not on the verge of declaring a unilateral war on ISIS then he is either at odds with the current Pope and in danger of being excommunicated for sins against Nature, or he is implementing Rome’s secret orders delivered via a Vatican hotline installed in the Lodge. David Marr seems capable of holding both those views simultaneously, which should come as no surprise. Either view is guaranteed to get his face before an ABC camera.

Loony as these ranters have been over the course of the past two years, their collective dementia cannot hold a candle to the latest effort at explaining why the Prime Minister is just so inappropriate, to use one of the critics’ favourite catch-alls. After today’s edition of the Age, that honour must surely belong to Lea McInerney, who thinks — that word is used advisedly — that the Abbott odium is a consequence of his youthful interest in boxing. Explaining how she came to this revelatory insight, McInerney conducted an experiment before what was, presumably, a knot of fellow Abbott haters:

“That led to us talking about the Prime Minister’s style, the polarising language, the brinkmanship, our fears for the effect it’s having on the psyche of our country. I mentioned Mr Abbott’s boxing history and my fascination with his posture, and told them I was curious about what it might be like to be in his body.

Goaded on by my friends, I stood up, took a breath, hunched my shoulders, locked my arms, and walked across the room. Without even consciously thinking about it, my chest and jaw thrust forward and my fists clenched. I could feel myself ready for a fight.

What old ways of thinking might Abbott be locked into, within that boxer physique of his? He uses fighting metaphors a lot, but what else? In some of his language, in the way he puts things, I hear echoes of old-school Catholic doctrine.”

The first reaction was that the column must be a hoax, that final sentence’s passing swipe at Catholics being the tip-off. Several years ago, an internet entity calling itself Alene Composta became briefly the toast of the anti-Abbott set (and, of course, the ABC) with a parodic blog expressing just the right sort of opinions about conservatives, global warming, women, cats and lentil casseroles. Surely McInerney was more of the same, a satirist’s creation to lampoon the luvvies?

But no, she is the genuine article alright, as her grants from the Australia Council and other bodies establish beyond doubt.

Once, the Fairfax papers were on the left but still within the bounds of sanity. Those days have long since passed.

McInerney’s piece can be read in full via the link below. Try not to laugh too loud.

Deaf Australians get the finger