When weather was just weather 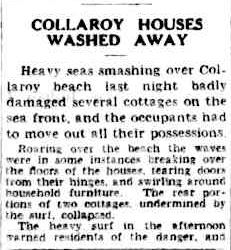 UPDATE: Perhaps emboldened by 7.30‘s leap to link recent storms with global warming (below), The World Today has gone in boots and all: one item on the floods themselves, a second on insurance premiums in the age of climate change and, inevitably, why those CSIRO scientists who have long insisted climate change is real (and once again been proven correct, apparently) must be kept on the job to continue proving climate change is real.

In total, 14 minutes of alarmist breathlessness, all courtesy of the national broadcaster.

All through the past few days of the wet and wild weather that afflicted Sydney, almost audible beneath the howling wind and tin-roof tattoo of rain pouring down, you could sense a thought rumbling through the collective mind in ABC and Fairfax newsrooms: ‘Five millimeters in an hour, that’s climate change for sure. Is it too early to tap a dial-a-quote from Tim Flannery?’

As it happens, it was not until well into Monday afternoon that the Sydney Morning Herald‘s resident weather worrywart, Peter Hannam, decided to quote a few of those settled scientists whose ARC grants prove they are so much smarter than everyone else, especially at obtaining ARC grants. Get used to it, the boffins told their Fairfax stenographer, because surging tides and vanishing homes are the new normal.

To its credit, the ABC waited a little longer before making the link between eroded beaches and not enough wind turbines, or too many coal mines, or the central heating in jet-setting climateer Cate Blanchett’s latest mansion. By the time 7.30 went to air, however, the temptation to make the connection obvious to all who sip their fair-trade coffees in the national broadcaster’s Ultimo cafeteria was just too strong to resist and — voila! — a series of sound bytes with several of Big Warming’s silver-tongued preachers. UNSW’s Ian Turner went first, followed by his colleague, Ashish Sharma, who said

“the type of flooding that you’re seeing from this big East Coast low event is something you can expect to see much more of in a more localised, more regional type of setting.”

This is why we need to keep our climate scientists safely and comfortably settled, with all the grants and taxpayer funding their hearts desire. Common folk are apt to get confused, you see, by what seem unsettling contradictions. Head of climate monitoring at the Bureau of Meteorology, Karl Braganza, had this to tell Hannam:

“…climate models estimate the number of such lows may decrease by 25 per cent or more by the end of the century, particularly in winter.”

And yet there we were, not more than a few hours after Hannam’s report went online and being told by 7.30 that Braganza’s “decrease” is Sharma’s “increase”, the soggy consequence of which being “something” we can “expect to see much more.”

One can only wonder how many more millions in grants it will require before Big Climate reconciles this apparent contradiction to the satisfaction of those not blessed to grasp that no warming for almost 20 years actually equals warming, and storms predicted to become more common will actually occur less frequently. You need to be very smart indeed to discern accord in contradiction. Click on the image below to enlarge it and you will notice just how smart is Professor Sharma, a very comfortably settled climate scientist. For those whose spectacles have been washed away by rampaging climate change, the sums have been highlighted in yellow. 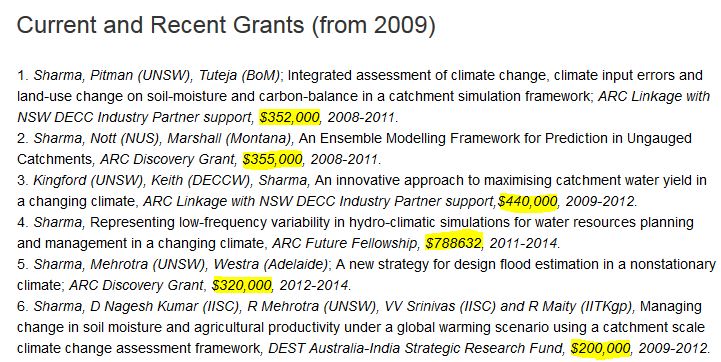 All up, that comes to roughly $2.5 million, which confirms what those who paid attention in Grade 4 have known for some time:

If global temperatures continue to increase, then a warmer atmosphere will store more moisture and the storms will get more intense and they will get more concentrated in time and in space. You will have more and more rainfall that causes more and more of a problem.

The professor should spend an afternoon with Tim Flannery.  His rains that never stop would remedy Flannery’s dams that can never fill.

Non-settled citizens are not excluded from doing their own climate research, however, and at no cost whatsover. Visit Trove.com and you will find the SMH story from June 13, 1945 reproduced atop this post. It describes the flooding, beach erosion, evacuations and property damage endured by the very same strip of Collaroy sand which the ABC re-visited last night. But that was long ago, when weather was still weather, no one had heard of global warming or ARC grants, and scientists, generally speaking, shared a common definition of the word “increase”. For further background on Collaroy’s long history of flooding, click the link below and open any one of reports from 1915, 1925, 1934, 1937, 1944, 1945, 1950…..

A time for truth