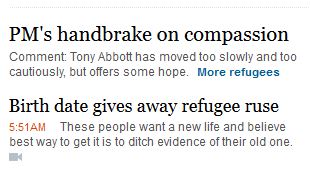 The ability to hold two conflicting ideas and simultaneously believe each to be true is a very handy knack indeed. Cheating husbands picture themselves as entirely committed to spouses and families. The portly assure themselves that one more sticky bun is a mouthful of no accord. And if you work for or edit a dying, addled, disgrace of a newspaper — and here The Age springs immediately to mind — it is entirely possible to place two contradictory assertions on the home page, one right below the other.

The illustration above, taken from this morning’s Age homepage, makes the point.

Story #1 asserts that PM Abbott is dragging his heels in not immediately providing Syrian refugees the succour, visas and Centrelink appointments they deserve.

And right underneath? Why, another story explaining that country shoppers from Bangadesh, Pakistan and other points of origin lacking cradle-to-grave welfare systems are passing themselves off as Syrians in order to reach the West’s government-funded dental chairs.

Ah, the Age! Believed by fools, produced by hypocrites.

To get a glimpse of the destruction a once-sane newspaper is inflicting on itself, click the link below.

Two down, lots more to go

A day that lives in infamy