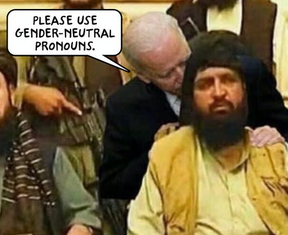 National Review ‘s Jim Geraghty, surveying the debacle of the US retreat from Afghanistan, sums it up in six short words: Something is wrong with the President

The transcript of President Joe Biden’s interview with ABC News’ George Stephanopoulos dropped, and the president’s incoherence, insistence that he was incorrectly briefed, denial that he was warned by his military advisers, and oddly low profile in the past week raise troubling questions about his ability to perform his duties.

After making no public appearances for four days — during a major foreign crisis — President Biden read a 20-minute speech off a teleprompter on Monday afternoon and took no questions. He immediately returned to Camp David. He had no events on his schedule Tuesday. On Wednesday, he gave another 20-minute speech about vaccine boosters off a teleprompter from Camp David, and again took no questions. Also on Wednesday, the president sat for an on-camera interview with George Stephanopoulos that did not go well…

…As of this writing, Biden has no public events on his schedule for today.