Too many Cooks
boil the wroth 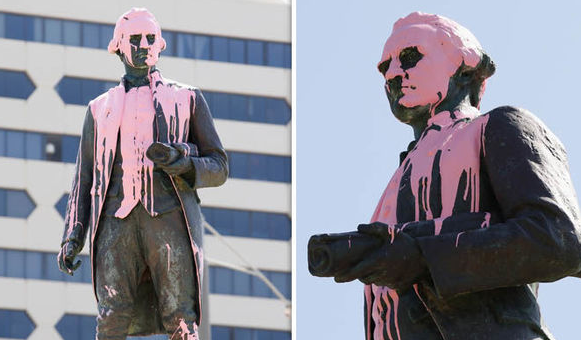 For some time now, and especially since an American career criminal breathed his last beneath the knee of a thug cop in Minneapolis, the attention of the Australian Left has been brought to bear on … Captain Cook.

For those in that particularly noisy segment on the groupthinkers’ side of politics the connection must be blindingly obvious, although it will continue to mystify many others as paint is sprayed, protests organised and the long-since devalued cry of ‘Racist!” echoes hither and yon, especially on the national broadcaster’s news and talks shows. Online, where petitions are being raised to remove Cook statues from Alaska to Hawaii, New Zealand, Cairns and Sydney, enlightenment is no more easily come by.

Take, for example, the 500+ signatories demanding that Hyde Park be liberated from the great navigator’s gaze, which has surveyed Sydney from atop his plinth since not long after Henry Parkes thought it a good idea to honour the man whose arrival in Botany Bay marked the start of this nation’s documented history. Here is how the petition’s instigator, a certain Paris Zhang, presents her case:

No guidance there, just the Left’s typically spurious assertions, unsupported opinion and, inevitably, a cliche or two sufficiently simple to be bleated at the next traffic-blocking demonstration.  This is good enough for the ABC, always eager to give organised idiocy an editorial boost, but adults will remain no wiser as to why a specifically American contretemps has incited such passion on the other side of the world.

The one thing that is clear is the suggestion of some of Cook’s milder critics that his statue be removed to a museum. His image represents the past, you see, and a museum is where the past belongs. Indeed, that is where it must reside if the present is to be recast and the future re-charted.

Not that it will worry Ms Zhang and her online posse, but there’s an aesthetic problem with that notion. A Quadrant reader and art historian, who asks to remain anonymous for fear of the Left’s doxing and harassment, writes:

The colossal statue of James Cook [should] to remain in situ, unless it is under immediate severe threat of damage or destruction and has to be moved for its protection.

The statue of Cook in Sydney is one of sculptor Thomas Woolner’s finest and is of major significance in his oeuvre. Woolner was delighted to receive the commission for Cook from Henry Parkes in 1874.

Since the sculptor had spent many months in Sydney when a young man, [he] knew the position the proposed statue was to occupy He designed the statue precisely for the position it occupies in Hyde Park (more of a huge rectangular Square, than an actual park) in the very central location right in front of the museum.

The pedestal is high, which necessitated raising more money for the sculpture. The bronze statue, which itself is 13ft high, was completed in 1878 and the largest Woolner ever made.

The size of the statue was undoubtedly dictated to Woolner by its importance and its location.

If it were to be moved into a museum, the statue would need to be exhibited on its original pedestal to have full aesthetic impact. If it is not displayed at this height the statue will not make sense in terms of proportion and will not work aesthetically.

The statue would be dwarfed by an interior setting and would not have the benefit of the expansive outdoor setting for which it was intended. This setting, like the background of a painting, was part of Woolner’s original conception for the work. William Allingham in his poem, ‘A Statue for Sydney, New South Wales’ of June 1878, appreciated this when he wrote:

There on his breezy column will he stand,
The bloodless conqueror, viewing sea and land.

I fully appreciate the sensitivity of the above words, but they do record the views in England at the time. I would plead for the statue to be left in the site for which it was intended, but for a plaque to be added beside the statue explaining that Cook discovered Australia for the Europeans and adding relevant text about British colonialism and how it is regarded in Australia today.

There are those of us of the opinion that a sculpture could be commissioned as the First People’s Response to Cook, allowing people to think through both the issues and the art. While Cook is a towering figure, the new sculpture could be sited not that far away without spoiling the impact of either.

I ask you, and your fellow petitioners, please to reconsider moving this extremely important Victorian public statue, which will seen by fewer people in a museum, and which is part of the shared history of our two nations.

Aesthetics? Alas, that concept isn’t likely to win converts amongst those who find it impossible to sign and comment on a petition without using the procreative vulgarity as punctuation.