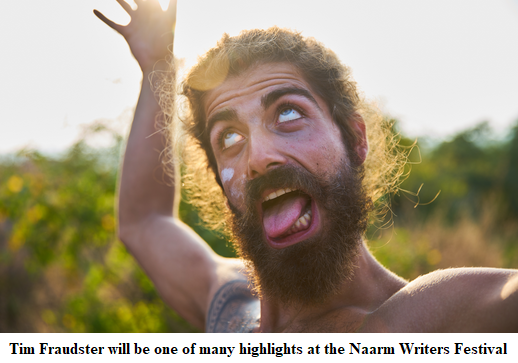 Adelaide Writers’ Week has just concluded with plaudits all round. As one book buff put it: “It’s been a real opportunity to get up close and personal with the imaginations of our most accomplished literary craftspersons.” Happily for lovers of the written word the fun doesn’t end there. For the next seven days in the city formerly known as ‘Melbourne’, we have Naarm Writers’ Week, with an even bigger cast of publicly subsidised nonentities you’ve mostly never heard of.

Here are some of the glittering line-up.

Former Greens senator Rhiannon Engels has added immeasurably to our understanding of the Ukraine invasion with My Red Square Idyll, memoirs of her time in Moscow on a course in revolutionary infiltration. She is passionate on the need for a boycott of Ukrainian exports for ‘unprovoked aggression’ against Russia.

Zaky Mallah’s new novel Heads Will Roll imagines a future struggle between a band of Islamic peace activists led by himself, armed only with scimitars and kalashnikovs, against the Citadel of Satan (the Gay Pride Centre in St Kilda, Victoria).

Aunty Joy Oodnadatta is a proud Tomandjeri woman who passionately believes Australians should be listening to an  Indigenous Voice (her own). She is campaigning for the opening of an Aboriginal tent embassy in Kyiv.

Louise Bigott is known to all Australians as a star ABC investigative journalist. She is currently working on Forget the High Court: Pell Did It, a revised edition of Spare a Tear for Witness J., her powerful indictment of the Roman Catholic Church (“unputdownable”: David Marr) to be published by ABC Books.

Kevin Goering-Trudeau is an Australian-Canadian writer who is passionate about COVID and “the unique opportunities it presents for the western world to abandon worn-out anti-collective Enlightenment notions of individual “liberty”, a point of view he argues in his forthcoming book China’s Gift to Us. Kevin lives in voluntary lockdown in his parked Prius. His hobbies include curating his collection of masks and collecting QR codes for his album.

London-born Jane Cloggs needs no introduction as a specialist writer in the flourishing field of self-publicity. She is passionate in condemning Russian aggression and believes Australia should sponsor an international advertising campaign with the slogan Je suis Ukraine, which she has offered to write and direct herself if adequately funded by government.

Grace Wild has never written a line, which makes her a refreshingly unique participant in a writers’ festival. Grace happily achieved much-deserved national celebrity status after revealing that a friend she knew at school whose name she can’t remember told her that a girl in her class had a cousin whose brother once thought he saw a man in a park who looked like a potential abuser.

Dr Tim Fraudster is an academic historian specialising in the colonialist era. In Genocide on the Yarra he uncovers the true story of how Naarm, a thriving Indigenous metropolis of boulevards and stately architecture – “with trams, outdoor cafés and a sophisticated night life” – was colonised by Batman and Fawkner and renamed Melbourne.

Amanda Screech is chair of the ABC’s flagship Sunday morning Pontificators and is passionate in denouncing “woeful on-air staff salaries forced on the ABC by Coalition underfunding.” Her biography of Natasha Stott-Despoja has recently been pulped.

All the way from the Emerald Isle comes Rory O’Kneecap whose experience as a freedom fighter with the IRA gives him a unique insight into the plight of Indigenous Australians unjustly excluded from entrenched racist power structures. He describes his most recent book, Give Billy a Bomb, as “a manifesto for Aboriginal advancement”.

Greg Tinkle (pronouns they/us) are a trans activist living on unceded Tomandjeri land who passionately oppose the oppression of trans minorities in the Ukraine. Greg’s writing is epistolary in genre and designed to address an audience of grant-dispensing arts bureaucrats.

Roz Snarler (pronouns he/him) is a proud non-binary Queer woman/person and author of the primary school textbook John & Betty Change Roles. She believes that schools should be prohibited from using outmoded gender-divisive terms like “boys” and “girls” and should refer to students as “birls”.

Benjamin Hoo-Flung is a Chinese-Australian enfant terrible and passionate opponent of talentism, which he considers “unfairly restricts publishability to writers who demonstrate talent.” He is keen to explore the possibilities of conceptual writing, a literary form in which readers visualise what he would have written had he written it.

The world of children’s books is represented by Lydia Drooling. Her latest offering, Smiley Gets His Teeth Knocked Out, relates the adventures of the cheeky freckled kid – a perennial favourite with Aussies of all ages – when he and his mates stray into a bush gully where an Aboriginal initiation ritual is in progress.

Phillip Blare, writer, broadcaster, adman and veteran polymath, has long been Australia’s original all-purpose sage. Phillip has the literary distinction of having written some of the nation’s most iconic advertising copy, including the first “singing commercial’ ever aired on TV (‘False teeth need three-way care / So soak your dentures in Kemdex / To sterilise / Deodorise / Clean your dentures in Kemdex”) and such award-winning campaigns as “Rothmans is Good for You” for Tobacco Australia Pty Ltd and “Quit. Or Drop Dead” for Anti-Smoking Australia. Phillip’s latest venture is a hobby wind farm sustainably powered by his own oratory.

Writers’ Week guest director Mary-Lou Schwartzenberger, a proud Native-American woman of colour, was born in Seattle into an immigrant family from Schleswig-Holstein. She is passionate in her condemnation of “systemic whiteness” and is writing a best-seller on the need for dermatologists worldwide to concentrate on mass means of “cancelling noxious white skin pigment”.

Please note: Naarm Writers’ Week is fully compliant with Australian arts administration WOOV/CMPONC standards (ratio of women or other victims to cis-male persons of non-colour) with a certified score of 4:1.

6 thoughts on “Keyboard Ticklers on the Yarra”