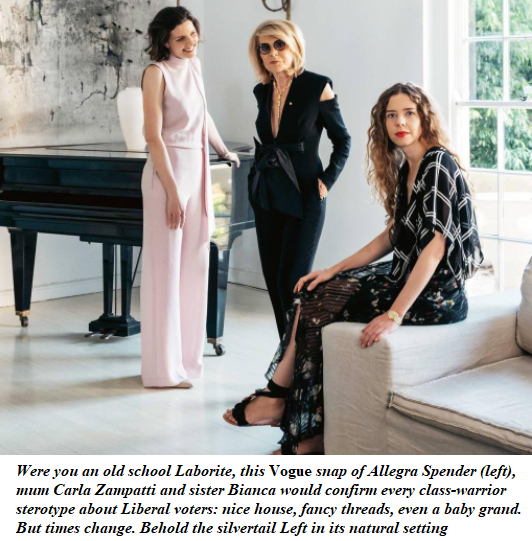 In a mathematical expression there are two types of values, those that are variable, just a placeholder, and those that are constant, for example the value of Pi or the Pythagoras constant, the square root of 2. Two pieces of mail that arrived in my Wentworth mailbox this week referred to ‘Liberal values’, although which kind they represent, variable or constant, is increasingly difficult to discern.

The first piece of mail, or I should say pieces of mail, came from John Howard OM AC, and included a personal note from the former prime minister, a photo card and a reply-paid envelope to be returned with a donation requested by the Liberal Party’s NSW division. I imagine this was sent owing to our former membership of the Liberal Party, which ended abruptly (along with many others) on the day of the Great Resignation, September 14, 2015, when Malcolm Turnbull succeeded in his long-running campaign to undermine Tony Abbott and remove our elected prime minister from office. Along with many other disgusted Liberals, my wife and I annulled our party memberships immediately, and now watch from the sidelines as interested observers.

In his letter, Mr Howard highlights the challenges we face from “Labor, the Greens, Unions and so-called Independents – all committed to undermining our Liberal values … Your generous donation will allow us to fight for our values, and deliver a government that has the best interest of all Australians at heart.,”

Unfortunately, doing so will require ticking the box for a man who seemingly does not share any of our values, the self-described “modern” Liberal, Wentworth’s sitting member Dave Sharma.

The second piece of mail that arrived last week reminded me of how much our values diverge. It came in the form of a card from the Australian Christian Lobby showing Dave’s face beaming out from the controls of a cartoon crane controlling a wrecking ball in the process of smashing down faith-based schools. ‘The truth about Dave Sharma’ was emblazoned across the front. On the reverse of the card we were asked

In February, Dave Sharma voted to remove a law that protects the values of faith-based schools. Does his attack on faith communities accord with your values?

There were formerly a number of shibboleths that served to unite Liberal voters, among them support for freedom of speech, thought and religion, support for energy independence and our Constitutional Monarchy, along with the concept of a democracy for all, with one vote per citizen. These capital L Liberal values are now under attack from lower-case-l liberals, moderates who pursue a progressive agenda and “can’t articulate a defence of tradition, or their own instincts, and so they fall back on the ideology: I should be able to do what I want, as long as I don’t hurt anyone else.”

That last quote comes from the author of a recent book, Liberal Shock, examining how traditionalists have entered into a disastrous alliance with libertarians, those who prioritise the freedom to choose above all else and look with contempt on those who share an instinctive horror at such iconic progressive views as support for euthanasia.

It has sent traditional Liberal Party members scurrying for the exits and decimated the volunteer ranks. At the most recent NSW council elections in 2021 I took a snap of the empty chair outside my polling booth. A Labor volunteer looked on mockingly at the Liberal How to Vote cards left abandoned in a pile on the chair.

Local Young Liberals of my acquaintance are now working their magic in western Sydney electorates that may represent a path to victory, sensibly abandoning the inner city to the likes of Allegra, Zali and Co.

But I cannot abandon Wentworth as my electorate. Dave Sharma will get my vote. I will place my mark on the ballot box while holding my nose because the alternative is so-called Independent Allegra Spender and a Greens/Blue-Green (Teal)/Labor government.

I don’t know much about Ms Spender’s values, apart from the fact she wants “a better climate for Wentworth.” But I suspect if myself, Allegra and Dave Sharma somehow ended up sitting around a dinner table together, I would be the odd one out in any conversation about values.

At that fictional dinner party, I might also ask Allegra what’s wrong with the current climate in Wentworth? Like many local residents, I reckon the existing climate is exceedingly fine. Mild winters with pleasant autumns and springs. Summers are hot with a bit of extra humidity in February and March, alleviated by the nightly southerly buster which blows in from the sea. If Allegra is fed up with the climate in Wentworth, she can hop in her diesel weekender and be in the southern highlands in less than two hours. It’s not that hard.

Real estate prices in Bowral are quite high, but I think she can handle it.

I went searching for a quote around “values” to finish off this Diary note and came up with some options from Seneca, Shakespeare, and the Gospels, but this one from successful US Romance writer Jennifer Cruise seemed most appropriate:

Values aren’t buses … They’re not supposed to get you anywhere. They’re supposed to define who you are.