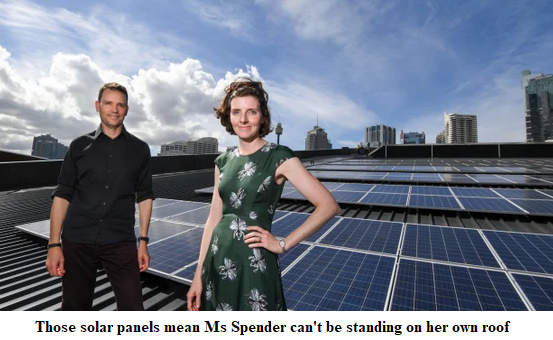 My wife and I purchased our little patch of Wentworth in the 1990s. While rising sea levels weren’t a consideration at the time, we now thank our lucky stars we chose a home that sits high on a ridge running through the electorate. Climate 200 Independent candidate Allegra Spender wasn’t so fortunate, and so lives in a multi-million dollar apartment block dangerously adjacent to Sydney Harbour.

While Allegra currently enjoys splendid views of the Harbour Bridge over the masts of pleasure craft and racing yachts bobbing about in Rushcutters Bay, her home is doomed to suffer the same fate she believes  is ordained for the atoll states of Kiribati and Tuvalu. They are all predicted to become entirely uninhabitable within the next 50 years, as the seas continue their inexorable rise. The science is settled, Allegra is living on borrowed time (as well as Gadigal land).

I pass by Allegra’s domicile a couple of times a week on my regular constitutional, about a 5km round trip walking briskly down the hill to Rushcutters’s Bay and back again. It commences from a point close by Victoria Barracks. Our house was built by a colonial-born stonemason in 1859 on a bit of dirt that was part of the Sydney Common and outside council boundaries at the time: no streetlights, no roads, no sewerage. It was truly a pioneering period.

A hand-driven water pump that still remains nearby on Oxford Street was only erected in 1868, so God knows how the lady of the house filled her kettle and bath. The stonemason and his good lady had moved on by the time the pump was installed, having sold the place in 1864 for 200 pounds. The block had been purchased in 1858 for 65 pounds and four shillings, which shows you are always on a good wicket with eastern suburbs real estate.

Across the road from the water pump and the barracks is a junction that 20 years ago included a bunch of very useful retailers: grocers, a cake shop, laundromat, video store and a decent French bistro. Then some genius decided to buy up all the terraces, kick out all the leaseholders and reinvent the area as The Intersection. This is filled with upmarket boutiques, retailers of ludicrously expensive cosmetics and the kind of café where you need to decide between a Sticky Honey Chai or Turmeric Latte to have with your Shakshuka (whatever that is).

After passing through The Intersection, a dogleg to the left passes down a narrow and crooked lane. Along the way is one of my favourite pit stops, revolution central in Comber Street. In between the neat terraces is a small nondescript cottage that features a glass-enclosed noticeboard on the front wall with an ever-changing array of posters and notices to support a fashionable left agenda: Free Julian Assange, Support the Asylum Seeker Resource Centre, and on this day Support Pacific Islands by taking action on climate change NOW.

There is an Allegra Spender Corflute adjacent to the noticeboard, so I may suggest to the residents that they undertake some sort of appeal that entwines the plight of poor little rich girl Allegra to that of the Pacific Islanders.

I have never seen anyone go in or out of their red front gate. I imagine the cottage is occupied by a pair of desiccated hippies who somehow obtained title through squatting in the 1960s before all around them became gentrified. They probably have no power or water and subsist on lentils and the product of their own sustainable veggie garden.

As I carry on down the hill, a young mum in short leggings is attempting to steer a Bugaboo containing her pride and joy towards the Organic Bread Bar with one hand while struggling with a Great Dane, attempting to get a better sniff of a nearby tree, straining at the leash in her other.

Darlinghurst Public School is always a worthy diversion, as the principal likes to patronise the neighbourhood with platitudes from such woke heroes as John Lennon or the Dalai Lama placed on the school noticeboard. This week it’s a quote from the sainted Audrey Hepburn, “Nothing is Impossible. The word (sic) itself says I’m Possible!” One hopes that whoever chose this bit of aspirational nonsense is not teaching Year 3 spelling classes.

Further down Boundary Street is a large industrial building which before WWII housed a manufacturer of lingerie. My grandmother and her sister actually worked there in the 1930s after moving into the city from Trangie on the far western plains of NSW. The building has since been refurbished and now houses luxury apartments and boutique commercial offices. The foyer features a statue of large golden Buddha which would have left Winnie and Kath nonplussed, having been educated by the Mercy Nuns from Trangie Convent (.est 1912).

The remaining road along to Rushcutters Bay contains a few traditional businesses such as panel beaters, mechanics and wholesale butchers, although these are gradually being pushed out by the trendy galleries, gyms and luxury car retailers taking over the neighbourhood.

The path to Allegra’s home leads through Rushcutters Bay Park, on this glorious Autumn Day being enjoyed by Grammar Boys and Ascham girls playing sport in their school jerseys. Local mums and nannies push prams while shepherding accompanying toddlers and expensive toy dogs. The sea sparkles in shades of brilliant blue while the sun shines brightly through a canopy of ancient figs. A typical afternoon at a glittering apex of privilege.

As I peer across the road, the Spender abode presents as a large two storey unit block, built sometime early last century, and only a hop and a skip to the Harbour’s edge. Given its location in prestigious Darling Point my mind can only speculate on the multiples of millions I would need to move in next door. And how great a loss when the rising seas begin lapping at the front door.

I then recall a moment in a recent Sky News debate with local Liberal Dave Sharma, where each was asked what they were actually doing to allay the threat of climate change. Each candidate responded they had not installed solar panels. Neither drives an electric car. According to a report,

Ms Spender said she had tried to get solar panels on her house but due to strata rules she wasn’t able to. She said she didn’t have a garage or driveway and therefore couldn’t have an electric car – instead opting for both hybrid and diesel vehicles.

There are only two letterboxes out front of Allegra’s unit block, which leads me to reflect that this can’t be a very big strata committee. In fact, a search of the property records shows that Allegra owns one unit outright (no mortgage) and is joint owner of the 2nd unit with a 10 per cent share. The remainder is held by a lass who shares a surname with Allegra’s half-brother, Johan Schumann, the current CEO of Carla Zampatti Pty Ltd, the iconic fashion brand founded by their mother.

So, Allegra is 60 per cent owner of the block, but she can’t get around those strata rules? Crikey, they must be set in stone!

Also obvious from the street (through a gap in the front hedge) is a large Fujitsu inverter sitting beneath the front window. So, it would seem Allegra does not suffer for the climate cause during Sydney’s humid summer months but relaxes in air-conditioned comfort. Or perhaps she has found an energy provider who sources from wind farms or hydro only, not dirty coal.

As I stood across the road pondering on these issues, I was nearly run over by a sleek white Model S Tesla emerging from driveway of the Cruising Yacht Club of Australia. Unlike the full-throated roar of a traditional V8, an electronic vehicle emits a toy-like whine which offers little warning that a very large and fast-moving object is moments away from impact.

I scuttled out of the way and reflected on the difficulties that Allegra and her spouse must have in parking their diesel and hybrid. It is a busy location and finding a spot on the street must be a nightmare.

My eyes then fell upon the neighbouring unit block to Allegra’s, which is different in one significant way, the entire street front is a large four-door garage with accompanying driveway. If the garage goes back as deep as it looks likely it could accommodate up to eight cars. If only Allegra were on good terms with the owner, she might be able to park her own cars within and even arrange the installation of an EV charging station!

Property records show that Allegra’s neighbour, the one well-endowed with driveways, is none other than her half-brother, the aforementioned Mr Schumann and likely his wife. They hold title to each of two units that comprise the property, with no mortgage on either.

Johan, Allegra and her elder sister, Bianca, are co-directors of Carla Zampatti Holdings. The Australian reports that “Together, they control fashion ­labels Carla Zampatti and Bianca Spender, with more than 30 stores and 100 staff.”

They are also co-directors and shareholders of the family company, Tirano Pty Ltd, which holds additional commercial property in Darling Point and Double Bay.

The trio seem very close as family and businesspeople, which is terrific, and I wondered whether this cosy arrangement could include Johan providing a spare parking space and driveway to his sister and immediate neighbour Allegra, even somewhere she could plonk her EV charger, but I was not willing to sit by the roadside into the evening to catch her flicking up the roll-a-door. For all I know Johan might own a fleet of 8 vehicles and not have any room to spare in his enormous garage.

So, I begin the uphill trek home from Rushcutters Bay via a steep stairway leading up to Potts Point. To access the stairway, I pass by the spot where a large seal emerged from the bay a few years ago and began sunning itself in the park. It soon became a local celebrity and apart from startling a few local dogs it settled in quite comfortably. That was until an official party arrived from Taronga Zoo and swiftly decided this was a Life Not Worth Living, and promptly euthanised the creature. As the needle went in, the poor seal must have regretted emerging from the water into such a civilised neighbourhood.

Towards the top of the hill, I encountered a dreamy-eyed Jane Caro staring out from her own Corflute mounted on a power pole, encouraging me to vote for ‘Reason’. Nearby a swarthy fellow in a red beanie was arranging his possessions in a shopping trolley and wheelie bin. I pointed towards the Caro poster and a nearby Allegra and asked him who he would be voting for.

Walter Waverley is the pseudonym of a Wentworth resident who prefers anonymity to grief from his woke neighbours. He promises to continue reporting on electoral developments up and perhaps after May 21

Signs of the Times in Thoroughly Woke Wentworth