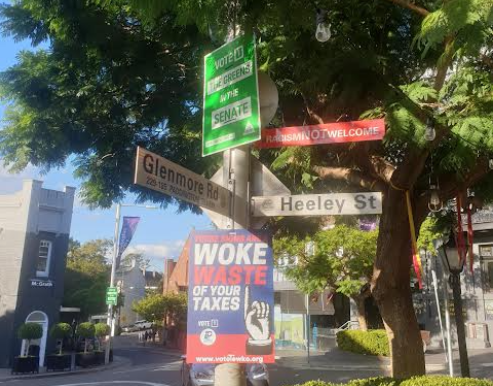 I suffered a Road to Damascus moment on a recent daily walk-through of the electorate of Wentworth.  Allegra Spender did not appear before me demanding, as Jesus asked of Saul, “Why are you persecuting me?” Instead, I experienced a revelation: I could not with clear conscience first-preference Liberal candidate Dave Sharma.

The moment occurred as I was meandering along a circuitous route through Paddington and Rushcutters Bay. As I progressed, I happened upon a copy of local newspaper The Wentworth Courier, which included an interview with Dave Sharma MP in which he proudly declared his role in preventing oil and gas exploration off the east coast of Australia.

In times gone by, an express wish to cripple the nation and limit its resources would have been met with stern discipline from the authorities. Stalin would have shot him. But today, Dave is happy in seeking the approval of 15-year-old climate-crazed schoolgirls and their mental equivalents in the Eastern Suburbs rich housewives set. Mind you, a last-minute letterbox drop on Friday from some mob called smartvoting.com.au attempts to claim Dave actually opposed the PEP-11 exploration licence.

My walk on this day commenced on Oxford Street, where I learned an Oroton store is shortly to arrive. Passing by the YOGIBEINGS Concept Store I was asked to subscribe to some Ayurvedic texts which reveal that copper is apparently able to balance all 3 doshas: Yatta, Pitta and Kapha. A trinity of doshas I am unfamiliar with, minerally or religiously.

As I approached the Paddington Fiveways intersection, I recognised a singular phenomenon regarding Allegra Spender posters. The number in the window of any building is in proportion to property value. The $6 million terrace on Glenmore Road, “the ultimate family entertainer full of luxury updates and spilling out to a north-facing pool deck,” — yep, Allegra poster. The red brick unit on the wrong side of the railway tracks with concrete front steps and aluminium windows, no Allegra poster. Funny that.

As I trekked further, I reflected on the week of bumf that had arrived in my Wentworth letterbox. It began with scratchy delivered on Saturday by the Liberal Party, asking me to discover the result of “Independents Bingo”. Those who live in a safe Labor or Liberal electorate will not have been troubled by such rubbish. The Wentworth electorate is one of the marginals that have been responsible for keeping the printing industry alive.

The Bingo Card from the Libs was actually quite good. Scratch the three buttons for “Who Will Call the Shots” and you are answered with “Union Bosses”, “The Greens” and “Labor”. Sounds about right, especially about the danger of “Independents on the sidelines”.

However, a personal card from “Modern” Liberal Dave Sharma on Monday provided me with the news that “we are on track to reach net zero emissions.” Also, that Dave is a “strong advocate for climate action who knows how to get things done by blending his diplomatic skills with policy knowledge.”

There were a number of superfluous passages of highlighted text on the printed card which demonstrated his diplomatic skills blend with graphical banality. The reverse of the card began a troublesome trend of less than worthy candidate testimonials.

Matt Kean, NSW Minister for Energy, acknowledged as a ridiculous figure by all sensible people, was effusive in his praise: “Net zero only happened because we had people like Dave who prosecuted the case and won the argument for taking strong and decisive action on climate change in the Coalition Government.”

Allegra hit back on Tuesday with a letterboxed pamphlet that included testimonials from some Eastern Suburbs’ heavy hitters: her former principal, a Former Reserve Bank Board member, a UNSW professor and “Ian”, a Wentworth resident who announces, “I’ve voted Liberal for 58 years. This time I’m out … I’m voting for Allegra Spender.” Ian’s current mental faculties or financial allegiances were not detailed.

I was prevaricating over my traditional Liberal vote and began considering Lib Dem Candidate Daniel Lewkovitz. He can be seen on this remarkable video which makes Sharma and Spender seem like the political lightweights that they are. His party will likely have about as much impact as One Nation or Clive Palmer in the final 2022 Election result, but Lewkovitz is a revelation. It may be a bit ironic for a Catholic to turn to a Jew as his political saviour, but a Damascus Road experience cannot be denied.

It is also problematic as I placed a large bet with TAB on Wednesday for a Coalition majority at 9:1. The odds have since shortened considerably. If my ship comes in there will be a huge celebration by the Waverley family at restaurant Hubert next week. If a side bet on Katherine Deves at 6:1 is also successful, dinner will be accompanied by some fine French champagne.

Walter Waverley is the pseudonym of a Wentworth resident who prefers anonymity to grief from his woke neighbours.

The Wentworth Liberal Who Went Rogue