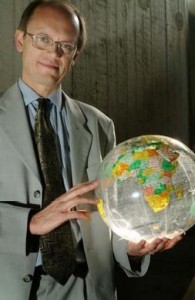 Belgium’s Jean-Pascal van Ypersele, 57,  has thrown his hat in the ring to succeed Rajendra Pachauri, 74, as chair of the Intergovernmental Panel on Climate Change (IPCC).

Given the trillion-dollar global commitments to CO2 emission reductions, the IPCC chair position would rank as one of the world’s most powerful. Expect the pursuit of prominence, influence and the prestige that go with them, rather than the best interests of the planet and its climate, to underscore the jockeying for a number of spots opening up at the top. Scientific clout will carry less weight than the drive to make sure Third World blocs are prominent, as in the UN itself.

Dr Ypersele will be a strong candidate, having served as one of the IPCC’s three vice-chairs since 2008, and with almost 20 years in IPCC roles.

The election will be at the 42nd session of the IPCC, probably in September-October next year, location yet to be decided.

IPCC headquarters in Geneva confirmed Ypersele’s nomination by email to me last night. Under IPCC rules, rival nominations are required within six months of the 42nd session.

Ypersele is a physics PhD whose research was on the effect of global warming on Antarctic sea ice – an interesting topic, as right now Antarctic sea ice is at a record extent for the satellite era. (Ypersele tweeted on October 7: “Scientists explain why record-high Antarctic sea ice doesn’t mean global warming isn’t happening”). He later specialised in climate  modelling. He was a lead author  for the third IPCC report,   and for the fourth report chaired plenaries for the three Working Groups.

Ypersele’s fellow Vice-Chairs are Ismail Elgizouli (Sudan) and Hoesung Lee (Korea). They cannot stand again for Vice-Chairs but could stand against Ypersele for Chair.

Even for the IPCC, the prospect of being  chaired by a Sudanese (with an M.Sc.) might be a bridge too far. But Hoesung Lee if he stands would be a   heavyweight. Elected vice-chair in 2008, he’s been a president of the International Association for Energy Economics, and a director of Hyundai  and  Korea Petroleum Development Corporation. It wouldn’t hurt his chances that his compatriot Ban Ki-Moon runs the UN.

Pachauri, an economics and industrial engineering PhD, was voted in as chair in 2002, after five years as vice-chair of the IPCC’s Asian bloc. He won the Chair by 76-49 votes against the incumbent, Robert Watson, whose roles included work with NASA, the World Bank, the White House, and the   University of East Anglia’s Tyndall climate centre.  Watson was chasing a second term but was opposed by the George W Bush administration and, allegedly, ExxonMobil.

The IPCC’s shared Nobel Peace Prize of 2007 gave Pachauri such prestige that he was re-elected by acclamation in 2008. Current IPCC rules bar him from a third term.

The InterAcademy Council (IAC) audit of the IPCC in 2010 emphasised four times that the chair should serve only a single term. But the IPCC Panel (i.e. general assembly) in 2012 declined to make the recommendation retrospective, allowing Pachauri’s second term to run to completion.

Other top IPCC slots are now also limited to one term in the same position, but the IPCC has retained the power to make individual exceptions.

Voting for the Chair is by secret ballot on a one-country/one-vote system for the 194 IPCC members. The US vote is worth no more than the vote of Vanuatu.

This could make  for some vigorous factional maneuvers. A win requires a simple majority. If no majority occurs on the first voting round, the top two candidates are put to a run-off vote.

The chair position is voluntary (as are all the elected and co-opted roles) but the job drips with prestige.  Pachauri  has picked up The Order of the Rising Sun, Gold & Silver Star (Japan); the Aztec Eagle (Mexico); La Legion D’Honneur (France); Commander of the White Rose of Finland; and India’s second-highest civilian honor, the Padma Vibhushan.

Pachauri’s biggest moment was being handed the  2007 Nobel Peace Prize (shared with Al Gore), as figurehead of the IPCC. To be fair, Pachauri asked the first IPCC chair (1988-97) Bert Bolin to do the Oslo acceptance, but Bolin was unavailable.

Voting for the rest of the Bureau positions involves quotas. IPCC members are arranged into blocs as follows: Africa, 54 countries with 5 guaranteed positions on the 31-member Bureau; Asia (32 countries, 5 positions); South America (12, 4); North/Central America (23, 4); SW Pacific (22, including Australia, 4); and Europe (52, 8). Note that  USA and Canada have no more seats than the Australasia/SEA axis. The Sudanese vice-chair of the IPCC Bureau has been on the Bureau for 12 years.

On the origin of the specious

Death by fire and culpable neglect