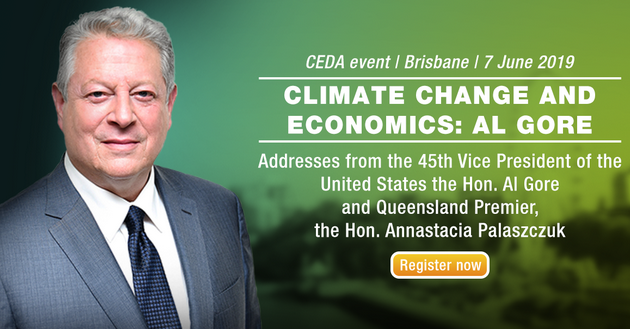 Annastacia Palaszczuk, Queensland’s Labor Premier, has Fridays on her mind. Suddenly “fed up” with her government’s Adani approval process, she has promised a decision “within weeks” on the two issues that have held up the venture for many months. Two deadlines were announced last week: Friday, May 31, for the allegedly endangered black-throated finch, and Friday, June 14, for the proposed groundwater management plan.

Another fascinating Friday is looming as well, this one at the Brisbane Convention and Exhibition Centre, where the Committee for Economic Development of Australia (CEDA) has invited climate catastrophist Albert Arnold Gore Jr to speak on Climate Change and Economics. The Premier’s deadlines straddle that June 7 event.

To approve a coal mine while the King of Alarmism is in Brisbane surely would be lèse-majesté of a high order, akin to waving a lump at a crowd of unhappy zero-carbon fanatics or at the opposition during question time. That sort of thing gets people irrationally upset, especially those not too rational to begin with.

There is no way you can write the sentence, “The treasurer of Australia, Scott Morrison, came to question time with a lump of coal on Thursday,” and have that sentence seem anything other than the ravings of a psychedelic trip, so let’s just say it and be done with it.

Scott Morrison brought coal into the House of Representatives. A nice big hunk of black coal, kindly supplied by the Minerals Council of Australia.

“This is coal,” the treasurer said triumphantly, brandishing the trophy as if he’d just stumbled across an exotic species previously thought to be extinct.

No one was afraid, or scared. People were just confused. What was this fresh idiocy?

As for the CEDA event, it will be an ironic finale to Queensland’s “first ever” Climate Week. What a triumphant seven days it would have been had the election gone the other way. Will all the “community groups, businesses, universities, not-for-profit groups, schools, landholders and individuals” invited to host a “climate action event” be forced to rewrite their sanctimonious, tearful, virtue-signalling scripts? Spare a thought, too, for the years three-to-ten students “invited to join the conversation about climate change, with the 2019 Minister’s Climate Challenge.”

Climate Week also will still include: “climate leadership training with former US Vice-President Al Gore and the Climate Reality Project for between 800 and 1,000 people.” Mr Gore, Gaia bless him, just wants to “train more grassroots climate activists who can spread the scientific facts”.

The founder and chairman of the Climate Reality Project — that would be the same jet-setting Al Gore, he of the multiple, floodlit mansions and sea-level raising motor yacht, has been sharing his evangelical battle with satanic carbon (dioxide) for decades — evangelical if one uses Elmer Gantry as a baseline reference.

CRP, which urges visitors to its websites to “Get Smart, Get Loud, Get Active”and “turn the heat on denial”.

CEDA describes itself as “an independent, not-for-profit membership organisation”. Committed to “thought leadership”, it identifies “policy issues that matter for Australia’s future” and pursues “solutions that deliver better economic, social and environmental outcomes.” Intrigued by the Gore invitation, I contacted Tamika Hartwig, Queensland’s CEDA event coordinator. Could CEDA provide more background? Was it a CEDA Board decision to bring out Preacher Gore? Clint O’Brien, an associate director, responded:

CEDA’s program in each state is developed to reflect the interests of our members and to progress public discourse and good public policy for Australia’s economic and social development. We’re looking forward to having Mr Gore speak on this critical issue.

My other question: “Does CEDA have a public policy position on climate change, coal mining and/or the Adani project?” A deafening silence was the answer.

So despite its lofty mission statement and professed dedication to “thought leadership”, CEDA has only one thought as to what Australians should be hearing and believing. Another professional body captured by alarmist groupthink. Were CEDA genuinely open to debate, other options and speakers might have been pursued. It could have invited a local economist such as Henry Ergas AO or Dr Brian Fisher, each a perceptive observer of the deeply politicised climate controversy, or an earth sciences expert and writer of the calibre of Ian Plimer. But what am I saying! As Radio National’s Rafael Epstein summed it up only last week, all voices questioning catastropharian orthodoxy must be silenced.

As for Mr Gore, it strikes me that the ABC quite deliberately gave him a marquee opportunity to influence voters less than two days before May 18’s election, urging them to “choose the right path” when he spoke to ABC radio breakfast on May 16. According to compere Fran Kelly, who made no bones about it, Mr Gore approached the national broadcaster “to talk about climate change policy ahead of the federal election”. Mr Gore labelled the Coalition’s climate policy as ‘not credible’ and taking the country ‘in the wrong direction’. Labor’s plan, however, was ‘an extremely significant act of leadership on the part of Australia.’ Call me a cynic if you will, but I’m prepared to hazard a guess what reception Messrs Ergas and Plimer would have been given had they contacted the ABC with an offer to discuss climate change “ahead of the federal election”.

And the caption beneath Mr Gore’s picture on the ABC website (below) , just a random quote plucked at random? That, at least, is what some ABC functionary might likely insist in testimony before Senate Estimates, keeping a professionally straight face while doing so. 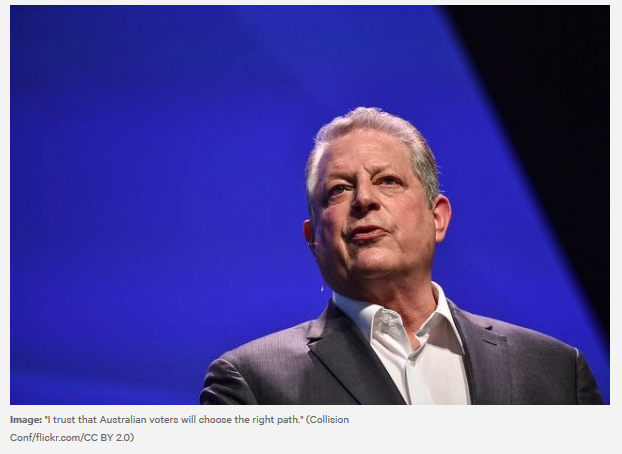 Australia, Mr Gore said, had a chance “to boost hope about the political will to tackle climate change” before the world gathers to review the Paris Agreement on climate action. The election, he said, was “an opportunity for Australians to play an incredibly important role in saying to the entire world: ‘We can solve this’ …What you do in Australia this Saturday has incredibly important global implications.”

The segment was produced by Michael Slezak, the ABC’s national environment reporter. It appears to have gone to air at 6.36am on Thursday, May 16, the time recorded on the link. The Gore interview sounds to me like a “political communication” as defined by Australian Electoral Commission. A media lawyer would know, but I wonder if it breached the relevant section of the Australian Broadcasting Corporation Act 1983, the Broadcasting Services Act 1992, or Special Broadcasting Service Act 1991which demands an election advertising blackout “on all electronic media from the end of the Wednesday before polling day to the end of polling on the Saturday”. It would be interesting to see the matter referred to the Australian Communications and Media Authority.

Incidentally, it’s not the first time Mr Gore has tried to influence Australian political outcomes and energy policy at a critical time. Readers might recall the moment in mid-July, 2014, when two high-net-worth chaps appeared in the Great Hall of Parliament House. For those memories fail them, that duet is captured in the cclip below.

They spoke for 11 minutes about saving the world from a “climate crisis” and then zipped off to dinner. It was a touching performance that could have been scripted by Barnum & Bailey or, that much bigger and clown-heavy circus, the United Nations.

In his 1992 book, Earth in the Balance – Forging a New Common Purpose, Mr Gore noted how many Judeo-Christian prophecies used images of environmental destruction to warn of transgressions against God’s will.

For those who believe in the literal truth of the Bible, it is hard to read about the predictions of hurricanes fifty percent stronger than the worst ones today, due to the accumulation of greenhouse gases that we have fostered, without recalling the prophecy of Hosea: ‘They have sown the wind, and they shall reap the whirlwind’.” … Many believers and non-believers shared a “deep uneasiness about the future, sensing that our civilisation may be running out of time.”

If our civilisation is running out of time, it’s because of the decline of reason, not climate change. Anyone who sincerely believes a government or agency can control the weather or climate is way beyond its reach.

Queenslanders did not vote LNP because suddenly they had an epiphany about climate-change pseudoscience. They did so for a more pragmatic reason. Many were fearful of losing their jobs, or not getting one. Most people have to earn a living at some stage of their lives. Trying to solve a problem that does not exist, or if it does, is incapable of solution – such as hypothesising a single silly cause for a complex global phenomenon like climate change, determining how to have your per capita climate-cake and eat it too and so on – is one way. Mining coal is another way.

“How good is Queensland?” asked our victorious Prime Minister on May 18. A couple of imminent Fridays down the road and we will all know.

Challenging “State of the Climate”