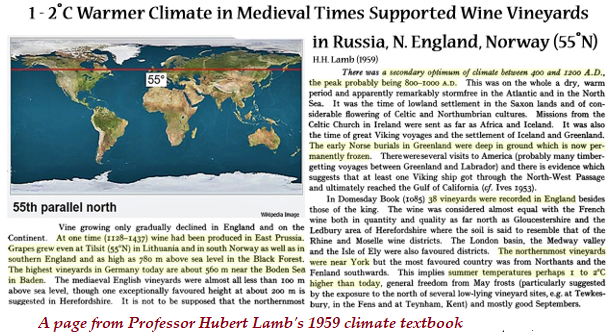 Not so long ago, I was watching a television climate “expert” talking, as they all do, about “unprecedented warming.” As proof of this he stood, arms outstretched, in one of the vineyards springing up across southern Britain. Look, everyone, the temperatures have risen so much that it is now possible to have vineyards and a wine industry in Britain! This is — that word again — unprecedented, he assured us.

I was underwhelmed, scepticism directing my mind to consider the many and various items of documented evidence that demolish his claim as surely and thoroughly as did Phylloxera vitifoliae ravaged the Old World’s vineyards.

In earlier times I had been interested in numismatics — coin collecting, if you prefer — and I recalled reading of a British tribe, the Atrebates, who occupied Kent (perhaps the very spot from which our “expert” was expounding) in pre-Roman Britain and produced one of the first coins ever minted there. A gold stater, it predates the Claudian invasion and features Verica, King of the Atrebates, in equestrian pose on one side and a vine leaf on the obverse.

As the climate-change spruiker droned on (and on and on and on) about his “unprecedented warming”,  I wondered why this this pre-Roman coin was not prima facie evidence that vine growing in Britain was possible even before the Romans arrived in 43 AD?  In what sense, then, is the expanding of modern vineyards in Kent “unprecedented” if it was warm enough for the Celtic Britons to grow grapes 2000 years ago?

As the alarmist tosh on the television continued, my mind wandered yet again into the past and to the Venerable Bede, whose his quill-and-parchment best-seller, The Ecclesiastical History of the English Nation, dates to around 731 AD. In his opening chapter, Bede sets the scene for his magnum opus with a listing of Anglo-Saxon England’s agricultural products. Along with his  description of eel farming we find

[England] also produces vines in some places, and has plenty of land and waterfowls of several sorts; it is remarkable also for rivers abounding in fish, and plentiful springs.

Seems that the news of vineyards in Anglo-Saxon England, circa 731AD, had reached Bede even way north in Northumbria. Is this another example of yet one more period of “unprecedented warming”? As the alarmist beat his catastropharian drum and enumerated the horrors to come on a fevered planet my mind wandered even further. What of the the Norman Conquest and the Domesday Book, compiled around 1085, might that have light to shed? In that chronicle of taxable agricultural assets drawn up at the request of William The Conqueror  I found this:

…Vineyards are recorded at 45 places in Domesday Book, 32 of these in Great Domesday, all in south-eastern England. All these vineyards were in the hands of Normans or the great abbeys…

…There were probably more vineyards in existence in 1086 than Domesday records. By the early twelfth century vines were certainly cultivated where none are mentioned in Domesday. Henry of Huntingdon, for instance, claims that Winchester ‘was rich in wine’, and William of Malmesbury that the wine of the vale of Gloucester was ‘abundant and of good quality’

As the TV climate evangelist persisted with his “unprecedented warming”, I moved on to consider the monastic records of Britain dating up to Tudor times and the dissolution of the monasteries by Henry VIII in 1540.  These accounts suggest monks were tending vineyards and making wine as far north as Yorkshire and the Scottish border country.  Perhaps men of the cloth were favoured by God with an unprecedented climatic dispensation because the monasteries in central Russia, Norway, and southern Germany were also sustaining wine production.

It would appear the mercury still has some way to go before temperatures reach the “unprecedented warming” of the Middle Ages. Here I was reminded of an old Flande 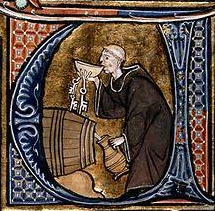 rs and Swann song, In the Desert:

… until the entire horizon was full of what the TV climate guru would no doubt call “unprecedented” solitary camels.

It would appear from the climate record that the chilly period from around 1600 to 1800 was an anomalous stretch in the two thousand year history of England. This was the period time when grapes could not be grown, the Thames froze and English tastes switched by necessity from wine to beer. Is it possible that climate “experts” are so ignorant of the historical climate record they have never come across these freely available historical references? Or is that they have found it convenient not to look and would prefer their audiences did not either? A textbook detailing the historical climate record published by old school climate scientist, Professor Hubert Lamb, founder of East Anglia’s Climatic Research Unit,  source of the Climategate emails,  must have been standard reading for today’s climate “experts” during their university days, but they don’t appear to have been too diligent with their homework. Maybe they were outside enjoying the warmer weather during that lecture and missed the page reproduced atop this article?

Roman Britain and the Atrebates … The Venerable Bede and the Saxon Chronicles … William the Conqueror and the Domesday Book … Henry VIII and the Dissolution of the Monasteries — each and every one recording an “unprecedented” moment, but only if you are sufficiently incurious, gullible or, be be blunt, sufficiently stupid to take careerist climate shills at their word.

Here I have looked at vineyards in southern Britain as a bogus proxy for “unprecedented warming”. But I suspect one could take any of the modern proxies and find that few stand up to scrutiny against the documented historical record. It is passing strange that a literate society, which has made two thousand years of documentation no harder to access than the effort involved in clicking a mouse, chooses not only to ignore such an invaluable storehouse of knowledge but to energetically manufacture an entirely illusory past. Sadly, like some pre-literate society mired in superstition and ignorance, we now appear to place more value on living memory, anecdote, manufactured history and the lies of snake oil “scientists” than the evidence so readily available.

We live in strange times. Indeed, we might almost say this age of fostered ignorance is genuinely unprecedented.