The Boon of an Incurious Biographer 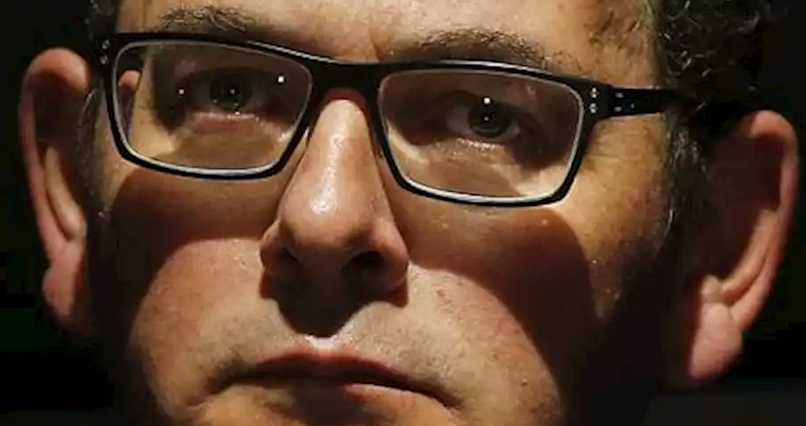 With Victorian State elections due on November 26, a good biography of Labor’s dark eminence and factional hack Dan Andrews is just what voters need. How good, then, is Daniel Andrews: The revealing biography of Australia’s most powerful premier (312 pages)[1] by The Age’s State political reporter Sumeyya Ilanbey? Well, good in parts.

She’s from Turkey and does her reporting in a black hijab. Good for her. She’s done that reporting well enough to collect a Walkley and a swag of other prizes and short-lists since she joined The Age only four years ago. Before that she did the hard yards for four years with throwaway Star Weekly papers after graduating in media at RMIT.

Her book’s workmanlike (or in The Age culture, workwomanlike) and follows the journo authorial model of plenty of anonymous interviews and the combing of press clippings, maximising personality at the expense of analysis. It’s commendable that she wrote with no cooperation 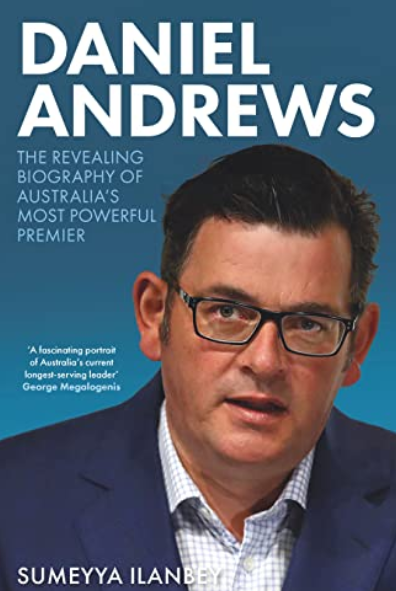 from Devious Dan. She does a good job depicting his autocratic, arrogant ways and vindictive treatment of friends and allies, let alone enemies. He’s no Stalin but he’s got traces of Stalinesque paranoia.

That said, Ilanbey is so immersed in Melbourne’s Age-ABC group-think that she can’t see the elephants trampling across her desk. Dan’s darkest deeds are invisible. She cloaks some evil events with spin worthy of an undergraduate Labor club.

Item 1: Cardinal Pell. We all know now that Victoria Police (“Uphold the Right”) traduced their Charter and went after the innocent Pell like a bunch of bandits. With Pell unjustly in a Victorian jail for 405 days, this was of global importance from the Vatican down, and the reverberations continue. I did a word search in Ilambey’s book – which she finished drafting around last April – for the four-letter word “Pell”. My Kindle response: “0 matches found”.

The Victorian coppers weren’t acting independently on their witchhunt of conservative, climate-sceptic Pell: they had the green light from Premier Dan. When the High Court freed Pell in a 7-0 finding[2], Dan’s vicious response was, “I make no comment about today’s High Court decision. But I have a message for every single victim and survivor of child sex abuse: ‘I see you. I hear you. I believe you.’” Thereafter VicPol’s ex-boss Simon Overland, when CEO of Whittlesea City Council in 2019, installed the ex-choir-boy Pell complainant in an undemanding job with Whittlesea City Council – the man’s first full-time job in five years. Move along, says author Ilambey, nothing to see here, or even mention.

Item 2: Victoria Police riot squad a year ago fired rubber bullets and tear gas at fleeing anti-lockdown, anti-vaxx protestors at Melbourne’s Shrine of Remembrance. This must have been the first use of rubber bullets on a crowd in Victorian history. VicPol incurred no adverse consequences, indeed Dan’s ministers instead excoriated the protestors.

In Ilambey’s book, the rubber bullets are unmentioned. Instead, she herself goes after the protestors, calling them (of course) “far-right extremists”. She re-cycles twice the meme-of-the-day that “some” far-right extremists (plural) were urinating on the “sacred site” itself (p279) and later she calls it “people pissing on the Shrine” (281). She simpers:

Andrews struggled to quell the horror caused by these far-right extremists exploiting the growing tensions. [3]

This technique of tarring any right-of-centre crowd with its worst elements is never employed against left-of-centre crowds such as BLM’s “mostly peaceful” looters and arsonists.

Item 3: Talking of BLM, a word search on my Kindle version for “Black Lives Matter” again got the response. “0 matches found.” In June 2020, at the height of Dan’s draconian lockdown, thousands of copycat Aborigines and Leftist ferals decided to swarm the city over the unjustified police killing of black criminal George Floyd in Minneapolis. The organisers, Warriors of the Aboriginal Resistance, “urged those attending to bring masks and hand sanitiser and stay home if they are unwell.” Yeah right.

Did Dan and VicPol’s riot police break them up by firing rubber bullets and tear gas? Not exactly. VicPol assistant commissioner Luke Cornelius tut-tutted that he’d “prefer the protest to be postponed” but people wouldn’t be fined for taking part. The protestors’ cause had full police backing: “We absolutely understand the sentiment and the anger that lies behind that and we are very keen to support the community in giving a voice to their concerns,” Cornelius said. Dan chimed in that it was “simply not feasible” to fine or arrest them.

As for author Ilambey, once again, nothing to see here.

Item 4A: Three months later, Ballarat mother-of-two Zoe Buhler, 28, does a Facebook post, “Freedom Day Ballarat”, publicising a planned anti-lockdown protest. A troupe of Dan’s coppers arrest the tearful mother-to-be in her pyjamas in her kitchen in front of her toddlers, also confiscating all her electronic devices. They put Zoe’s hands behind her back and handcuff her. The arrest is livestreamed by her partner, James Timmins, and it goes viral in both hemispheres.

Timmins can be heard saying, “This is a lot of stress on her too, she’s pregnant, come on, this is very unfair.” The same endearing VicPol boss, Luke Cornelius, “defended the arrest, saying cuffing the mother was ‘entirely reasonable’ while noting that the optics of arresting a pregnant woman are ‘terrible.’”

As for author Ilambey, this iconic moment in Victorian history is worth a mere 22 words:

…police had raided the home of a young pregnant mother in Ballarat, who had ‘incited’ people to protest the government’s prolonged lockdown. (282).

Last August, after the book went to press, and after two years stress for Zoe, the coppers, mindful of the coming election, dropped charges as “not in the public interest” to continue with the prosecution.

Item 4B: Among the rare journalists to cover the lockdown protests from right-of-centre perspective was credentialled reporter Avi Yemeni of Rebel News. For doing his job he was manhandled, body-slammed to the ground and arrested multiple times by Dan’s lickspittle cop-force. Last July, again mindful of the coming election, the coppers withdrew charges and “sincerely apologised”  to him for the arrests and detention.

Coverage in the Ilambey book of a colleague’s disgraceful treatment: zilch.

Item 5: Ilambey gives the details (mainly from press reports) of Dan’s “Red Shirts” dodginess in diverting $400,000 taxpayer money to party campaigning, but fails to join the dots when she writes:

The Age later revealed that detectives in Victoria Police’s fraud squad urged force command to consider arresting and prosecuting up to sixteen Labor MPs over the rort, but their plan was knocked back by senior officers. Some police were frustrated at government MPs and their lawyer, Rob Stary, refusing to take part in formal interviews. (p156. My emphasis).

Item 7: The incredible Andrews non-accountability over use of private security guards at COVID-19 hotels: Around 640 elderly Victorians in care homes died from COVID outbreaks from quarantine hotels guarded by incompetent private contractors hired by Andrews at a cost of  $30 million. Andrews’ team had rejected the offer of ADF soldiers in favour of giving the job to a half-baked, union-connected, notionally Aboriginal-owned and controlle outfit paying casualised staff $18 an hour cash.[4] Some guards – those not on the payroll as ‘ghosts’, allegedly whiled away the hours having sex with detainees. Amazingly, every politician and bureaucrat involved in the decision could not recall who made the decision. Going by the inquiry, overseen by a supremely incurious former Labor-appointed magistrate and alumni of Dan’s Monash Labor Club, it would seem the decision was made by osmosis and without human input.

Andrews threw various colleagues under the bus and told the toothless inquiry (not quoted by Ilambey): “Those mistakes are unacceptable to me. I want to thank you, Madam Chair, and the board of inquiry and all your staff for the work you are doing and will do. I want to make it very clear to each and every member of the Victorian community that I am sorry for what has occurred here.”

Ilambey deals in just one line with that who-dunnit-farce – which would normally be pure gold to a biographer. She writes: “Not a single person, including the leader of the state took responsibility for the disaster.” (250). Incidentally, she seems to shrink from the plain fact that Melbourne was the world’s most locked-down city, beating Buenos Aires by some 22 days. Instead, she says feebly, that “Melbourne was among the world’s longest locked-down cities.” (295).

Andrews looks a cert to be re-elected this month to become Victoria’s longest-serving Premier since Henry Bolte (17 years). He already presides over Australia’s biggest state net debt of $102 billion, compared with about $20 billion when he took office eight years ago. That’s $15,000 per Victorian. Victoria also has Australian states’ biggest budget deficit, highest taxes, fastest growing government spending (10 per cent pa since Dan presided in 2014), and the fastest growing public sector wages. Debt by 2035 is projected at $259 billion.

Ilambey’s chronicle of Andrews’ background and machinations within the party system is valuable and enlightening, but I’d rather be reading about how he’s monstering his own citizens, has turned VicPol into his partisan Praetorian Guard and, above all, thoroughly stuffing Victoria.

Tony Thomas’ essay collection “Foot Soldier in the Culture Wars” ($29.95) is available from publisher ConnorCourt. A new book, “Anthem of the Unwoke —Yep! the other lot’s gone bonkers”, is in production

[1] Page citations from Kindle vary from the hard-cover version.

[2] On the 7pm ABC TV News that night, the ABC failed to mention the decision was unanimous, later claiming this was inadvertent.

[3] The “pissing” I gather was unwitnessed but officials later reported urine stains on the walls. There was also scuffling with the police by some demonstrators. The media had no interest in demonstrators’ case against unprecedented loss of liberty during the lockdown.

7 thoughts on “The Boon of an Incurious Biographer”