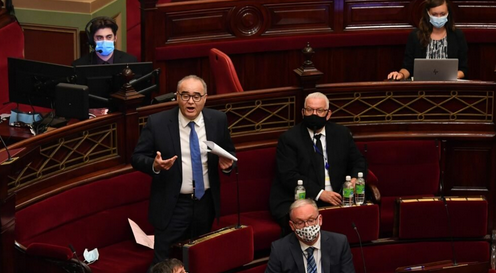 The goings on in Victoria this week were extraordinary. Following admissions from former Labor MP Adem Somyurek (above) about his involvement in the Red Shirts affair, which he has labelled “the biggest political scandal in Victorian history”.  Somyurek, a former Labor powerboker now banished from the party, introduced a motion in the upper house of Victoria’s parliament for the state’s corruption watchdog, the Independent Broad-based Anti-corruption Commission (IBAC), to investigate the party’s rort a second time.

The motion was carried successfully — indeed, unexpectedly — by 19 votes to 17, when Labor MP Kaushaliya Vaghela crossed the floor to back the motion. Veghela, who lost her preselection due to factional warfare, will now be expelled from the ALP. In introducing the motion, Somyurek claimed corruption within government represented the destruction of the public service and said the matter needed to be examined further.

As reported by NCA Newswire, the motion requested the Victorian Ombudsman investigate the role Premier Daniel Andrews played in “designing, propagating and facilitating” the Red Shirts rort, which saw electoral office staffers ostensibly hired to respond to constituents’ concerns but working instead to secure Labor’s election. All up, as a series of inquiries have found, Labor’s stole $388,000 from the public purse to further its electoral chances. Somyurek has also asked for an examination of potential branch stacking activities, the Premier’s social media unit staff, the monetising of factional politics, and electoral officers and ministerial advisers performing factional tasks during work hours.

Mr Somyurek was dumped from the Labor Party in 2020 following revelations he was involved in branch stacking, with some adamant his latest stunt was a last-ditch effort at revenge. While Liberal Democrats MP Tim Quilty said he would support the motion, he also believed it was a clear move from Somyurek to throw his former colleagues under the bus. “Mr Somyurek is not an uninterested party; I have no doubt this motion is intended as a way to get back at former colleagues for their role in his expulsion,” Mr Quilty said. “They fought dirty to oust him — and he’s fighting dirty to get them back. All the more reason for this investigation.”

All this reminds me of another huge political corruption scandal which brought down a long-standing regime some 30 years ago, the tangentopoli (bribe city) scandal of 1992-93, which rocked Italy’s political system to the core. It all started when a Socialist Party (PSI) member of the Italian parliament, Mario Chiesa, was arrested after taking a bribe from a cleaning service company. At the time, the Socialist Party was the second-largest party in Italy’s governing coalition, after the Christian Democrats. The party’s leader, Bettino Craxi, had taken it from near oblivion in the late 1970s to this government, himself  serving as prime minister for four years after 1983.

After his arrest, Chiesa sought Craxi’s protection, only for Craxi to refuse and indeed expel Chiesa from the PSI. On national television, Craxi called Chiesa un mariuolo (a crook), asking Italians to believe the PSI had only one bad apple and was otherwise composed of honest, upright people. Well Chiesa, feeling unjustly singled out, decided to go to prosecutors and tell them everything. Within a couple of months, the Milan branch of the party was under investigation and the net was closing on Craxi himself. In July 1992, decided to use a daring tactic. If he was going to go down, he would bring everyone with him. Craxi gave a speech to the Italian parliament stating that all parties took illegal money however they could get it. His defence was therefore not to declare himself innocent, but everybody guilty. In other words, justifying corruption as a necessity in a democracy.

The scandal then proceeded to engulf the Christian Democrats, in particular leading figures such as Giulio Andreotti and Arnaldo Forlani, themselves having held the office of prime minister several times.

Craxi himself was indicted on charges of corruption but prior to his conviction fled to his villa in Tunisia (he and the Tunisian President at the time, Ben Ali, were firm friends), dying there in exile in 2000. The political class of the time, which had governed Italy since 1948, was decimated. As for Mario Chiesa, he served his sentence for corruption but proved to be a recidivist, arrested in 2009 for bribes in relation to the trafficking of toxic waste.

What lessons are there for Victoria here?

Unfortunately, the tangetopoli scandal, while sweeping away the political class of the time, didn’t lead to any real improvement in Italy’s governance. The country has essentially been stagnant ever since, and the politicians who took over, as it were, have proven themselves, with a couple of notable exceptions, to be completely inept and no doubt just as corrupt. Many are former members of the old Italian Communist Party (PCI), which for years came with the stench of illicit funding from the Soviet Union.

Dan Andrews and his regime must go, for reasons I’m sure I don’t need to elaborate. If indeed the IBAC investigation is reopened and findings are made against Andrews and other ALP figures, will they be prosecuted? In Victoria these days, with the taint of matey favours hanging over VicPol and the Department of Public Prosecutions, you can never be sure. And will there be safeguardsput in place to ensure another ‘monetisation of politics’, as Somyurek put it, never happens again?

Dr Rocco Loiacono is a Senior Lecturer at Curtin University Law School.  The views expressed in this article are those of the author and do not necessarily reflect the views of Curtin University.