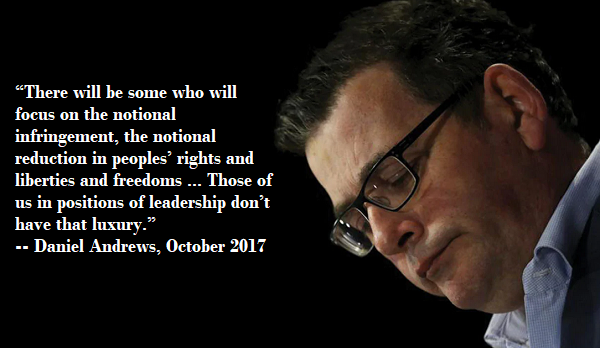 We have seen the warning signs for a number of years. Victorian Premier Daniel Andrews, who grows more detestable from each press conference to the next, is the most arrogant and authoritarian politician, not only in our country but in our history.  The arrogance we could live with, but the despotism and corruption demands a considerably more determined push-back than the current Victorian Opposition seems capable of mustering.

Right from the get-go, Andrews has shown nothing but contempt for the concepts and norms of democracy in this country.  Tearing up a contract for a much-needed freeway, accompanied by a huge compensation bill which he lied about never having to pay.  Using taxpayer funds to conduct ALP electoral campaigning and compounding the felony by spending even more to cover it up.  Politicizing and corrupting Victoria Police leading to, inter alia, the Gobbo fiasco, the Pell fiasco, Stasi-style interventions and arrests of critics etc etc.  The tragedy of the second Covid wave and the travesty of Andrews’ Potemkin judicial enquiry.  Nobbling Parliament in its fundamental role of holding government to account.  And, of course, signing a diplomatic treaty with China, our most implacable enemy, in clear contravention of the Constitution.  The list goes on and on.

Here’s the latest attack.  The Andrews government’s cynical ploy to conduct a ‘trial’, funded out of the public purse, of sick pay for casual workers is just the latest example of a drift (rush?) to authoritarianism in the socialist republic of Victoria.

What are the terms of reference for this trial?  What outcome will determine its success or failure?  And how will casuals react in the unlikely event (fat chance?) the ‘trial’ fails, and they have to relinquish a benefit — the higher hourly rate to compensate for paid vacation time and other benefits?

The unions claim to be opposed to casual work which is apparently ‘toxic’.  Chris Kenny suggested this could be because casuals are less likely to join a union.  That seems plausible to me.  Therefore, logically, what they and the government want is to drive people out of casual work and into permanent work.  Paying existing casuals more money is hardly likely to do that.  So, the end-game clearly is to make it harder for employers to hire casuals by imposing a higher payroll burden on them.  If that happens, workers who want to work casually will have their choice taken away from them.  That doesn’t sound to me like acting in the interests of the ‘worker’ – just the interests of the union.

This is nothing more than government intervention in the supposedly independent wage fixing system – soviet style central planning.  With this precedent in place, how long before the government decides, for example, that supermarket store packers need a loading to compensate them for working nights and establish a two-year trial for that too? Or that female workers need a loading to compensate them for being women.  Let’s trial that for two years, why not?  This is the thin edge of a wedge that private enterprise will find more and more firmly thrust into its fundamental rights as time goes by if Andrews is allowed to get away with it.

Which brings me back to the Opposition.  Liberal leader Mathew Guy’s response to this coup is to decry it as another tax on small business.  His words: “Whatever the reason, you can’t keep stinging small business”.

Sorry, Mathew, you’re not wrong, but you’ve missed the real point.  As much as the impost on small business is to be deplored, the real import of this excrescence is the encroachment of the State into yet another facet of what should be the normal business of citizens getting on with their lives and determining for themselves what is best for them.