Beyond the Reach of Debate, Evidence and Logic 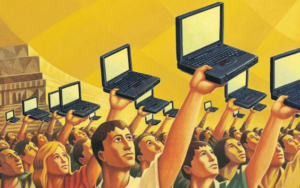 Even as the wave of wokeness seems at its peak, there are signs it could be about to break. ‘Defund the police’ is being replaced in many US cities that embraced it in 2020 with ‘Refund the police’. The 2021 Virginia gubernatorial race was won by Republican Glenn Younkin, in part a voter rejection of the teaching of critical race theory in schools. President Biden’s deep trough of climate change and social spending demanded by the Democrats’  Bernie Sanders wing crashed in the Senate. The re-emergence of serious geopolitics with Russia’s invasion of Ukraine has re-oriented energy policy in Europe and elsewhere. And women are pushing back against the transgender activists to protect their sports and facilities from encroachment. It’s encouraging, despite the depressing grip woke agendas have rapidly gained in many public and private organisations.

Encouraging, too, is that the once isolated critical voices, such as Jordan Peterson, are becoming a choir, even if not yet a massed choir.

Joining the chorus is John McWhorter, an associate professor of linguistics at Columbia University and regular New York Times columnist. And he’s black. He wrote his new book, Woke Racism: How a New Religion Has 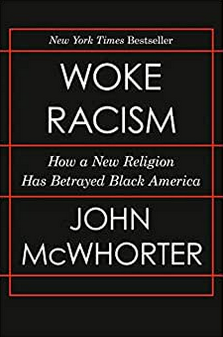 Betrayed Black America, on his porch in the summer of 2020, when the US was engulfed in the civil unrest following the killing of George Floyd. Entirely focussed on race issues in the United States, he’s a little surprised it’s been published in the UK and translated into German. It’s easy to see why. It’s clear, direct, accessible arguments and strategies have relevance well beyond its explicit focus, including to apocalyptic environmentalism and fourth-wave feminism.

As a linguist, McWhorter’s starting point is not the 2020 US riots but cancel culture — the hounding from their jobs of people who make seemingly innocuous statements and are condemned by “a certain crowd” as racist. He asks, “What kind of people do these things? Why do they get away with it? And are we going to let them continue?”

McWhorter dubs the adherents of what might be termed ‘ Third Wave Antiracism’ as ‘the Elect’, following Joseph Bottum, to distinguish them from the elite enjoying formal political, military, or financial power.[1] Although the meaning of the Elect as those chosen for salvation is apt, I am uneasy about its verbal similarity to ‘the elected’, meaning those who have a democratic mandate. I’d prefer Thomas Sowell’s term ‘the Anointed’. McWhorter writes:

Antiracism’s needle point homily par excellence would be the following. Battling power relations and their discriminatory effects must be the central focus of all human endeavor, be it intellectual, moral, civic, or artistic. Those who resist this focus, or even evidence insufficient adherence to it, must be sharply condemned, deprived of influence, and ostracized.

They get away with it because, in 21st century America (or Australia, for that matter), accusing someone of racism is a terror weapon from which people cower in fear. But we must not let them, writes McWhorter, “if we want to keep our intellectual, moral, and artistic culture from being strangled by what is not a sociopolitical program but a religion”. A religion in the anthropological sense of a pattern of beliefs, values and practices involving a profound suspension of disbelief. McWhorter says contemporary American universities and colleges are its cathedrals. Its clergy include Ibram X. Kendi, author of How to be an Antiracist, and Robin DiAngelo, author of White Fragility, who now command substantial speaking fees across America. Its original sin is ‘white privilege’, which requires ritualistic acknowledgement and perpetual atonement but can never, ever be exorcised. It has many disciples and they are evangelical – “the key to being Elect is a sense that there is always a flock of unconverted heathen”. When the Elect call something ‘problematic’, it means blasphemous. Heretics are ostracised via cancel culture; dissenting views are not to be questioned, but quashed. His issue is that the Elect are hurtful and betray Black America. We’ll come to that.

McWhorter regards the Elect as beyond the reach of debate, evidence or logic and his book is not intended to persuade them. Rather, it is a “call for the rest of us to understand that people of a certain ideology are attempting to transform [America] on the basis of racism”. He also makes clear his book is not intended to “stoke the flames among people who already agree with me” or as red meat for right-wing America. Rather he wants to “reach those on the fence, guilted into attention by these ideologues’ passion and rhetoric but unable to disregard their true inner compass.” He wants his readers to “commit with confidence” to “helping make things better for real people”. His key issue is how we work around the Elect and continue to make progress despite them. Because “sociopolitical progress is irrelevant to the Elect’s take on race in America not because they are stubborn, not because they profit somehow from stirring people up, but because antiracism is their religious faith”.

To some, the Elect just seem crazy. But McWhorter says that accounting won’t do. He traces the ideological origins to critical race theory and critical legal theory, which teaches that complaints about injustice can be based on a “broad story of dashed hopes and centuries-long mistreatment that afflicts an entire people”. This gives rise to social justice narratives disconnected from the facts or evidence of a particular case – feelings trump facts, victim narratives trump evidence. This has advantages to non-whites who mobilise it, and so they become Elects, acquiring status and identity as ‘survivors’. Whites become Elects because it’s a kind of political hack, a short-cut to ready-made, simplistic answers that signals virtue, confers moral authority and exalts them.

The central issue of McWhorter’s book is that antiracism-as-a-religion hurts black people while simultaneously claiming to be dismantling racist structures. We are to turn a blind eye to black-on-black violence, to leave unexamined causes of black under-achievement and continuing disadvantage, to dismiss practical solutions that do not conform to the Elect’s narrative, and to ignore or suppress evidence that the Elect’s policies not only don’t work but have significantly disadvantaged blacks. As a PowerPoint presentation to a 2020 conference of science teachers put it:

If you conclude that outcome differences by demographic subgroup are a result of anything other than a broken system, that is, by definition, bigotry.

The Elect undermine values that support success. McWhorter tells of a Charter school for poor brown kids that had the slogan “Work hard, be nice”. It has now decided this is inappropriate (i.e., blasphemous) because it “places value on being compliant and submissive” and “supports the illusion of meritocracy”. Instead of this homespun wisdom, the mantra of the Elect is “battle racism, be indignant”.

To get beyond the Elect’s “dismantling structures” narrative, or the “just getting rid of racism” fantasy, McWhorter has a deliberately short list of practical initiatives.

What ails black America in the twenty-first century would yield considerably to exactly three real-world efforts that combine political feasibility with effectiveness: There should be no war on drugs; society should get behind teaching everybody to read the right way; and we should make solid vocational training as easy to obtain as a college education.

He regards phonics as the right way to teach reading, along with direct instruction, especially for kids from homes lacking a culture of reading. For McWhorter, ending the war on drugs, meaning regulated legalisation, would have several important consequential benefits. These include reducing gang violence, and the injuries, deaths and prison sentences that follow; and eliminating drug dealing as a way-to-get-by lifestyle. This orients more black kids towards legal jobs, giving them an incentive to get an education. Acquiring a decent trade or other skill in vocational training can be less time consuming and less costly than a college education. It is a proven avenue to opportunity and success for many not academically inclined.

This program is heresy to the Elect and McWhorter considers how “we constructively manage an ideological reign of terror.” Forget the idea that the Elect can be persuaded, or that it’s just some young activists who will grow out of it, or that it’s just something going on in colleges and universities, or that it’s a trivial Twitterstorm among the urban elites. Elect ideology is being relentlessly implemented in America’s public institutions, schools and corporations. It now has a stranglehold on institutions that barely knew it just a few years ago.

McWhorter prescribes some strategies. There is no discussion to be had with the Elect as “they seek not conversation but conversion”, seeing their intransigence as “a prelude for a more moral society”. Reject the idea that being sensible about race is blaming the victim. He uses as an example Professor Greg Patton’s suspension from the University of Southern California’s Marshall School of Business for explaining Mandarin’s usage of its word ‘nay-gah’, and student complaints that its similar sound to the N-word was traumatising. McWhorter is explicit that “a lot of today’s victimhood claims on race are fake”.

To classify any pushback against transparently ridiculous claims of injury as blaming the victim is to assume the victimhood as beyond question. The phrase “blaming the victim” … has come to be used not as a teaching tool but as a battering ram.

McWhorter counters the charge that he’s not black enough because he is “hopelessly bourgeois” by simply rejecting the idea that “only people who have been chased down the street by a cop can have opinions about race worth a listen”. His positions, he says, stand or fall on their application to the mission of helping black people who need it.

The Elite rule by “inflicting terror”, so we must “stop being afraid of these people”, stand up and say, “no”. To do so, we need to steel ourselves against the slur of racism. Don’t try to avoid them calling you a racist, get used to it and walk on despite it.

[E]nlightened Americans must become accustomed to being called racists in the public square. Whenever you are in a position to give an Elect the experience of calling you a dirty name and finding that you do not back down, you can contribute to a groundswell needed to put these people back in their place.

McWhorter provides examples of people who have stood up, said “no”, and survived. If you join them, the Elect will see you as “a moral pervert in bed with white supremacy. But you aren’t, and you know it. Stand up”.  In other words, observe the Elect and their performative rituals but don’t be defined by them. This will require a degree of civic valour that the Elect will classify as a “backlash”.

But if, amid that righteousness, they gradually go back to 2010 and conduct themselves as one voice at the table out of many, our job is done. The Elect is a scourge and must be treated as such.

Dr Michael Green has a PhD in systems engineering

2 thoughts on “Beyond the Reach of Debate, Evidence and Logic”