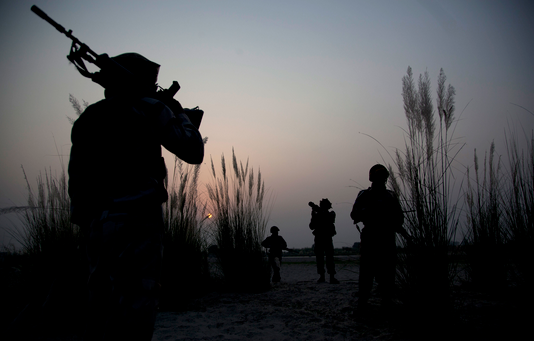 The most controversial film in Australia this year isn’t a Hollywood blockbuster. It doesn’t wade into the contemporary culture wars. It isn’t even being screened in English.

It’s The Kashmir Files, a Hindi-language historical drama that peaked at #5 on the Australian box office charts. It portrays the plight of the Kashmiri Pandits, Hindus who were forced out of northwest India’s Kashmir Valley by a terrorist campaign of ethnic cleansing. The film claims it was genocide.

India is a Hindu-majority country, but Kashmir is more than 95 per cent Muslim. The region was the focus of extreme violence during the 1947 Partition of India, and it has been militarised on and off ever since. Pakistan unsuccessfully attempted to take Kashmir by force in 1965, and India has faced a separatist insurgency in the territory ever since. The most recent period of martial law, which included suspensions of internet and phone services, ended just last year.

The Kashmir Files focuses on a particularly intense bout of Kashmiri separatist violence in 1989-1990. It bounces back and forth between that bloody episode and student elections at India’s top university. The protagonist of the film is a Hindu university student who discovers that his Kashmiri Pandit parents were killed by Muslim terrorists.

In a region that is always a religious pressure-cooker, that would be controversial enough. But the graphic Muslim-on-Hindu violence portrayed in the film borders on provocation. The film’s release was even delayed in New Zealand amid accusations of Islamophobia. It is rated 18+ for “high impact themes and violence”.

The violence portrayed may be high impact, but it was real. One particularly gruesome murder, when Muslim terrorists gang-raped a young Hindu woman before literally sawing her in half, is actually underplayed in the film: the murder is graphically staged, but the rape is treated symbolically by the tearing of her sari.

Critics might counter that Hindu-on-Muslim violence is also a very real phenomenon in India, and they would be right. But a work of historical fiction is not obliged to seek historical balance. The film tells the story of the Kashmiri Pandits, not the whole troubled history of modern India.

The Kashmir Files is very clear on this. It explicitly seeks justice for the refugee Pandit community, not a resolution to India’s larger political debates. But the writer, director and co-producer, Vivek Agnihotri, clearly intended to politicise the Pandits’ plight, and he certainly succeeded.

The film has been heavily promoted by Indian prime minister Narendra Modi’s Bharatiya Janata Party, whose Kashmir policies are strongly endorsed in the film. The opposition Congress Party also seems to recognise the film’s emotional appeal, and has proposed legislation to support the resettlement of Kashmiri Pandits.

But the real political emotion of the film centres on an issue that non-Indians are likely to miss: the controversy over Article 370 of the Indian Constitution. In 2019, Modi’s government revoked Article 370, which had granted Kashmir limited rights of self-governance. As a result, Kashmir’s status as an integral part of India has now been regularised.

That is a travesty to those—intellectuals and terrorists alike—who have long fought for an independent (or more realistically: a Pakistani) Kashmir.

The film portrayed Article 370 as an affront to Indian sovereignty and a compromise with terrorists. Critics of the film (and the Modi government) characterise the revocation of Article 370 as a travesty of majoritarian democracy. Some have called it the death of democracy.

But despite the political furore over the film, the main rhetorical target of The Kashmir Files isn’t the anti-government opposition, or even the Kashmiri Muslims it vilifies. It’s India’s anti-nationalist intellectuals.

Kashmir’s Muslims are depicted in the film as being violently anti-Indian, but in a region that has suffered through decades of armed rebellion, that’s no surprise. As the old Punjabi proverb has it, thieves shouldn’t be blamed for robbing a caravan; stealing is the thieves’ dharma. The blame lies with the guards, whose duty was to keep the caravan safe.

Thus although the chief villain of the film is a fictionalised Muslim freedom fighter, the chief antagonist is a Hindu university professor—who should be guarding the caravan, but instead has joined the thieves. Transparently modeled on the outspoken novelist Arundhati Roy, the professor character stands in for India’s (supposedly) de-nationalised, de-racialised intellectual class.

The professor reprises word-for-word Roy’s 2010 claim that “Kashmir has never been an integral part of India. It is an historical fact. Even the Indian government has accepted this.” Roy was accused of sedition for this statement, though she was never prosecuted.

The fictional professor of the film uses all the arts of intellectual trickery to manipulate the student hero into betraying his heritage—and his family. In the end, the student rejects her and gives a rousing speech telling the story of Kashmir as seen through Pandit eyes. The professor skulks away, humiliated.

Intellectuals, understandably, despise The Kashmir Files. And the intellectuals are right: the film presents a jingoistic, nationalist, anti-Muslim, anti-intellectual version of Indian history. Intellectuals are only fulfilling their dharma in criticising the film.

But the dharma of a film is to make money, and The Kashmir Files has made a fortune. Produced for less than $3 million, the film grossed more than twenty times that in its first three weeks. And it’s still showing all over Australia.

The Kashmir Files isn’t the only Indian film to make it big in Australia. The weekend of March 25, the Indian independence movement epic RRR debuted at #2 at the Australian box office—and it’s showing in Telugu, a language that most Australians have never even heard of. Multiculturalism is here to stay.

For example, most Australians have been mystified by India’s refusal to condemn the Russian invasion of Ukraine. Few know that in 1957, Australia co-sponsored a United Nations resolution calling for India to withdraw from Kashmir.

That proposal was vetoed by the Soviet Union. Sixty-five years may seem a long time to wait for payback, but it’s an historical blink of an eye for Kashmir. Open the files on Kashmir, and you can begin to understand India, its internal conflicts, and even its international relations. And those of us who have to read the subtitles have the most to learn.