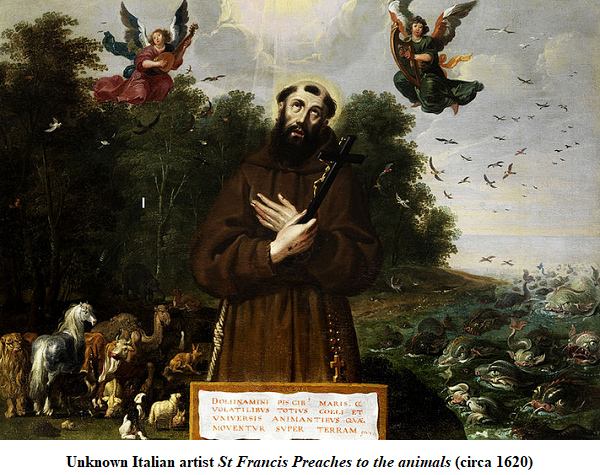 In the last scene of one of Shakespeare’s grimmest tragedies, King Lear, an old and broken man weeps for his dead daughter, Cordelia:

Surely one of the most powerful scenes in English literature, these few lines have brought generations to tears as they remind us of the awfulness of death and loss, particularly when the victim is a young and loving human being whose fate is absurdly unjust. Generations until now, anyway.

Today the point has probably been blunted for many of us by a gradual change in thinking.  Animals have never had legal rights in any human society, but there is a growing view that the protections our nineteenth century forbears introduced to restrain cruelty to animals should be extended, in our more enlightened times, to give them actual rights in law.  There is now a vegetarian or two in every family, usually young persons who are so disgusted by the thought of eating animals that they will abstain themselves and try to persuade their parents or siblings to do likewise.  Many go a step further and become vegans: they avoid any use of animals, not only directly as food, but indirectly as providers of food: milk products and eggs are off the menu. As for wearing leather, don’t even think about it!

I respect this view up to a point – my family is no exception to the modern norm – but I suspect it of being very much a First-World phenomenon.  It thrives in strongly town-based societies where food options are plentiful and affordable, and actual choices can be made.  Not all communities have that luxury, though: poor people eat what they can when pickings are meagre, and the custom of eating any kind of meat is difficult to break where alternatives are few.

So why has this taken off in the West?  Our parents and grandparents might have called it faddishness, but that won’t wash with today’s young, who will tell you that sheep and cattle have ‘as much right’ to live and prosper as we do.  Dogs may be mankind’s closest companions, but there was a time when they worked; today they are more likely to be petted, lovingly cared for and cosseted ‘fur-babies’, fed with a care that some folks in poorer countries would envy.  I don’t begrudge people their pets (because to be honest I have my own) but I have to say that there are questions to be answered about fairness and justice in a world where many die of hunger every year.  It is true that dogs, cats and even birds can be much loved and even life-saving helpers for lonely or sick people, loyal and affectionate mates for growing children – but are we going too far?  This is, or ought to be, a very troubling matter for our consciences.

If that is the only problem it’s bad enough.  But it has more serious implications. Fondness for pets readily transmutes into a kind of sentimentality, often detached from practicality, that makes life difficult if not actually absurd.  For example it is a criminal offence to kill a snake in most parts of Australia; having young children or pets in real or potential danger is no defence against the possibility of prosecution. Those who actually live in the country are scornful of the idea that snakes are a threatened species, for they are palpably plentiful and extremely dangerous.  Whenever a shark attack occurs there are vocal protests against any suggestion that the offending beast be caught and killed, despite the fact that shark meat (happily described as flake) is enormously popular in several states’ fish and chip shops. Currently there is a huge campaign to save the koala, though it is well known that their numbers have always fluctuated and that they are almost certainly more numerous today than they were at the time of European settlement.

The view that animals, all animals, have as much right to life as humans not only lacks discernment and common sense but is actually pernicious, for it blunts our perception of the seriousness of some terrible abuses. Infanticide, the starvation through greedy neglect of far too many of the world’s children, the viciousness of racial conflict and the criminal maladministration of some of the world’s poorer nations, all happen because other things have claimed higher priority in the minds of the prosperous middle-class elite that makes most of the world’s big decisions.

As the shelves of Western supermarkets fill with more and more ‘plant-based’ foods and vegan options, the opinion is spreading that a time will come when eating meat will seem as disgracefully immoral and outmoded as keeping slaves.  Carnivores will be as rare a species then as smokers are now. Could such views be well founded?  Who can be sure of anything in a world that changes as fast as ours?  Certainly meat is likely to become more expensive as the proportion of people in the world who can afford it grows and demand increases. Vegetable alternatives are becoming tastier and more interesting.  Moreover even unrepentant carnivores are very concerned about cruelty in food production: keeping hens in batteries and pigs or vealers in stalls goes beyond the ancient norms of husbandry.

If humanity has indeed been empowered (as many of the major religions teach) to manage and use with justice the fruits of the earth, then forced large-scale breeding, excessive use of pesticides, deprivation of free movement allowing normal feeding practices looks awfully like greed.  Personally I can see no ethical dilemma in eating animals that have been well cared for and humanely slain, but the scale and manner of the butchery may eventually compel us to greater restraint and a more balanced diet.

And the fact remains that Cordelia is more precious than any rat or horse or dog.  She is a human being with the power of reason and a spark of divinity and an eternal destiny to inherit.  The Greens and I will probably never agree on that point, though there is common ground in our shared belief that mankind has responsibilities towards the natural world, not mere opportunities for profit and gain at any cost, and that animals like us can suffer, give loyal service and truly love.

23 thoughts on “Cordelia and the Fur Babies”