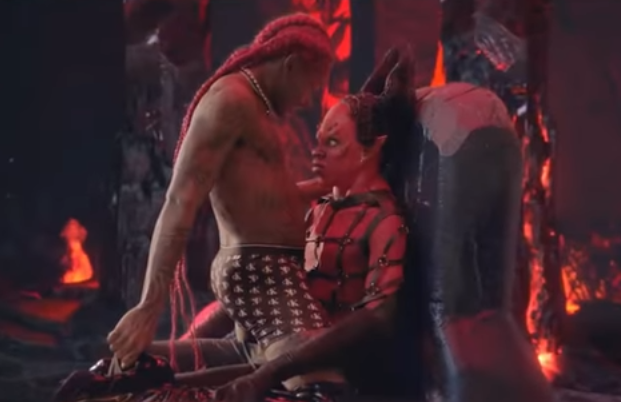 If you haven’t heard of Cardi B, the rapper responsible for a sexually graphic hit that earned her a meeting with a fawning Joe Biden immediately before the recent US election, there is little chance another rising star will elicit a nod of recognition. This one goes by name of Lil Nas X and he has taken things to a whole new level. In this case, a level of Hell, and I mean that literally. A self-described children’s performer, Lil Nas X — real name Montero Lamar Hill— has recently released a music video of himself sliding down a stripper’s pole to perform sexual acts upon the Devil, seated upon his satanic throne (above). For this he has been praised by academics.

The question is, how have we come to this point as a culture, and in particular a Western nation? A time when—just as in ancient Israel—someone like the Biblical prophet Isaiah could lament those in his day who call evil good and good evil, who traded darkness for light and light for darkness, who put bitter for sweet and sweet for bitter (Isaiah 5:20). The answer is somewhat complex.

In 1966, Philip Rieff wrote a book called, The Triumph of the Therapeutic: Uses of Faith after Freud. Rieff’s thesis was that the West had rejected God and in His place sought to create a society where the individual was liberated to indulge in the freedom of one’s own sensuality as an integral part of the pursuit of personal happiness. However, with the ‘therapeutic’ replacing the transcendent moral order traditionally provided by religion, this has only led to the triumph of what I refer to as “therapeutic totalitarianism”.

Just over 50 years after Rieff’s work was published, we’re starting to perceive ever more clearly the bitter fruit of such a Prometheanism endeavour, i.e. the idea than the individual human has unlimited and godlike  potential to re-create the world to accord with one’s own passions and desires. For an excellent analysis and contemporary application of Reiff’s work, see Carl. R. Trueman’s, The Rise and Triumph of the Modern Self: Cultural Amnesia, Expressive Individualism and the Road to Sexual Revolution. Another, even more prescient contribution in this regard is Rod Dreher’s, Live Not By Lies: A Manual for Christian Dissidents (Sentinel, 2020). Dreher explores how “the menace of totalitarianism” is still a very real threat to Western society. As he explains:

Based largely on the work by Hannah Arendt, The Origins of Totalitarianism published in 1951, not long after the horrors of World War II, Dreher outlines six key factors which make any society susceptible to totalitarianism.  The first is loneliness and social atomization. According to Arendt, totalitarian movements are “mass organizations of atomized, isolated individuals.” Sadly, even with the advent— indeed, veritable explosion—of social media, young people are feeling more disconnected than ever. As Dreher rightly observes, “It is no coincidence that millennials and members of Generation Z register much higher rates of loneliness than older Americans, as well as significantly greater support for socialism.”

Referencing the work of Robert Putnam, a Harvard political scientist and author of the influential book, Bowling Alone: The Collapse and Revival of American Community, Dreher writes:

…Putnam documented the unravelling of civic bonds since the 1950s. Americans attend fewer club meetings, have fewer dinner parties, eat dinner together as a family less, and are much less connected to their neighbours. They are disconnected from political parties and more sceptical of institutions. They spend much more time alone watching television or cocooning on the internet. The result is that ordinary people feel more anxious, isolated, and vulnerable.

Second is the loss of faith in hierarchies and institutions. Dreher refers here to the work of the famous French sociologist Emile Durkheim, of whom he writes:

…observed that many people who had been set free from the bonds of religion did not thrive in their liberty. In fact, they lost a shared sense of purpose, of meaning, and of community. A number of these despairing people committed suicide. According to Durkheim, what happened to individuals could also happen to societies.

This is because confidence in institutions—whether it be political, media, religious, legal, medical or corporate—are at all-time lows. According to Dreher, “Only the military, the police, and small businesses retain the strong confidence of over 50 percent.” Although, significantly, Dreher wrote these words before the (“mostly peaceful™”) Black Lives Matter riots in the US and their accompanying Marxist agenda to “defund the police”.

The third factor is the desire to transgress and destroy. According to Arendt, the Nietzschean mantra of “will to power” so dominates some intellectuals that, “They read not Darwin but Marquis de Sade.” Dreher explains what Arendt means by this as follows:

Her point was that these authors did not avail themselves of respectable intellectual theories to justify their transgressiveness. They immersed themselves in what is basest in human nature and regarded doing so as acts of liberation.

Dreher goes on to quote from the work of historian James H. Billington, who observed that the last days of imperial Russia, just before the revolution, had “a preoccupation with sex that is quite without parallel in earlier Russian culture” and that “the sensualism of the age was in a very intimate sense demonic.” Indeed, according to Dreher:

Among the social and intellectual elite, sexual adventurism, celebrations of perversion, and all manner of sensuality was common. And not just among the elites: the labouring masses, alone in the city, with no church to bind their consciences with guilt, or village gossips to shame them, found comfort in sex.

…the figure of Satan became a Romantic hero for artists and musicians. They admired the diabolic willingness to stop at nothing to satisfy one’s desires and to exercise one’s will.

Dreher then goes on to observe in a subsequent chapter:

Pornography is ubiquitous, but marriage and family formation are petering out. Ours is also an intensely sensual age, one that emphasizes sensate experiences over spiritual and rational ideals. That sexual desire is taken to be the central fact of contemporary identity is not seriously contested (it is telling that in the irreconcilable conflict between religious liberty and gay rights, the latter is winning in a blitzkrieg). The swift acceptance of gender ideology is a clear sign that Prometheanism and sensualism have been joined and have overturned the old order. The internet has acculturated at least one generation to pornography, far exceeding anything that those who overturned Russia’s censorship law in 1905 could have envisioned.

The fourth toxic influence is an eager willingness to believe useful lies. Alarmingly, we are seeing this kind of pattern starting to re-emerge. As Dreher writes:

In 2019, Zach Goldberg, a political science PhD student at Georgia Tech, did a deep dive on LexisNexis, the world’s largest database of publicly available documents, including media reports. He found that over a nine-year period, the rate of news stories using progressive jargon associated with left-wing critical theory and social justice concepts shot into the stratosphere.

What does this mean? Basically, that the mainstream media is framing the general public’s understanding of news and events according to what was, until very recently, a radical ideology confined to left-wing intellectual elites. A classic modern-day example from Australia is Bruce Pascoe’s  absurd Dark Emu  which contends Aboriginal culture is responsible for everything from the development of aquaculture to the invention of democracy, bread and government! The problem with this type of approach, as Dreher rightly explains:

You can surrender your moral responsibility to be honest out of misplaced idealism. You can also surrender it by hating others more than you love truth. In pre-totalitarian states, Arendt writes, hating “respectable society” was so narcotic that elites were willing to accept “monstrous forgeries in historiography” for the sake of striking back at those who, in their view, had “excluded the under privileged and oppressed from the memory of mankind.” For example, many who didn’t really accept Marx’s revisionist take on history—that it is a manifestation of class struggle—were willing to affirm it because it was a useful tool to punish those they despised.

In fifth place come the mania for ideology. Dreher writes:

Why are people so willing to believe demonstrable lies? The desperation alienated people have for a story that helps them make sense of their lives and tells them what to do explains it. For a man desperate to believe, totalitarian ideology is more precious than life itself.

This explains why the Left cannot tolerate dissent and derides any and all who disagree as peddlers of racism, sexism, bigotry and exclusion — take your pick — which viewed together amount to the ‘violence’ of ‘hate-speech’. Because for them, sexuality is worship. Their personal identity is founded upon their sensual desires. And thus, for someone to disagree with their point of view is to reject who they are as a person. But this is not just a lie but a form of political totalitarianism. Again, Dreher nails it:

One of contemporary progressivism’s commonly used phrases—the personal is political—captures the totalitarian spirit, which seeks to infuse all aspects of life with political consciousness. Indeed, the Left pushes its ideology ever deeper into the personal realm, leaving fewer and fewer areas of daily life uncontested. This, warned Arendt, is a sign that a society is ripening for totalitarianism, because that is what totalitarianism essentially is: the politicisation of everything.

Finally, the sixth factor, which grows out of a society that has come to value loyalty more than expertise. Dreher rightly observes that, “Loyalty to the group or tribe is at the core of Leftist identity politics”. One of the examples which Dreher refers to is that involving transgenderism:

A Soviet-born US physician told me—after I agreed not to use his name—that he never posts anything remotely controversial on social media, because he knows that the human resources department at his hospital monitors employee accounts for evidence of disloyalty to the progressive “diversity and inclusion” creed.

That same doctor disclosed how social justice ideology is forcing physicians to ignore their medical training and judgement when it comes to transgender health. He said it is not permissible within his institution to advise gender-dysphoric patients against treatments they desire, even when a physician believes it is not in that particular patient’s health interest.

Against these factors and the recognition by some of an ongoing cultural erosion of the West’s very foundations continues foundations of the West, perhaps to the point of imminent collapse. If you think that sentiment is misguided, perhaps that its pessimism goes to far, consider this: what hope for a society that richly rewards a kiddies’ entertainer who demonstrates his eagerness to be sodomised by Satan?