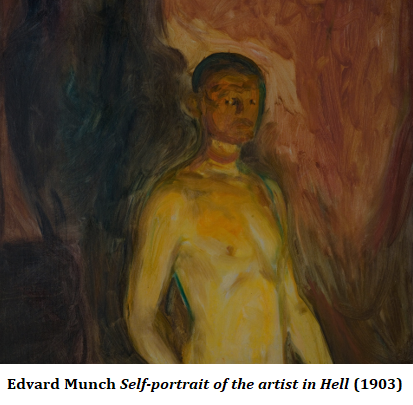 A voice is coming closer from a nearby road, so loud that it carries down the hill, the words resounding off the walls of the inner-city terrace houses. You can hear it even round the corner, from adjoining streets. It is a man’s voice but you do not recognise it; it seems possessed by some demonic power.

The man comes into view, his face red with fury as he shouts and curses. The threat of violence shudders in the air, but the man does not glare at you or any other passers-by. He is raging against invisible tormentors that are tearing him apart — the voices in his head. The neighbourhood sees people like him often enough to presume he is on illicit drugs or has failed to take the drugs he was prescribed.

Down a side street is a government clinic for people ‘experiencing problems’ from using alcohol and other drugs. The man will not be going there today, but he might go another time. Some of the regulars have been going for years, and there are always newcomers. Some of them have dogs. Strangely, they seem to care for their dogs better than themselves. If only this man would take his medication. With this smug thought, it seems wise to pass him by on the other side of the road. Later it comes to mind that the man may have no comfortable thoughts, no job, no home and no peace.

A homeless man recently told a story of how he wanted to feel high. He knew about meth. Meth made him confident, full of energy and drive[1], something that could appeal to anyone. A friend told him there was something better: he could get really high if he smoked fentanyl, a synthetic opioid fifty to one hundred times stronger than morphine. He took one puff, and that was it. He woke up twenty minutes or so later in the ambulance with one paramedic giving him Narcan to reverse the overdose[2]  and another performing cardio-pulmonary resuscitation. Once he was back from wherever he’d gone, he asked them if he’d been dead. They said yes, his heart had stopped, but they’d restarted it. That was it for fentanyl. He was going straight. In the future he would just stick to meth[3] .

Habits are jealous and possessive; they make the distance between drug users and other people closer than it first appears. A woman working in a barber’s shop had been diagnosed with diabetes. Her doctor said she could manage her condition through three 15-minute walks per week; otherwise she would have to take pills for the rest of her life with the risk that her condition would get worse.

‘So how is the walking going?’

‘Oh, I’m not going to bother with that. I’ll just take the pills’.

If possession is so hard to shake, maybe we need to go back across the road, look into the ditch where the people hearing voices have fallen, to see if something else is going on. 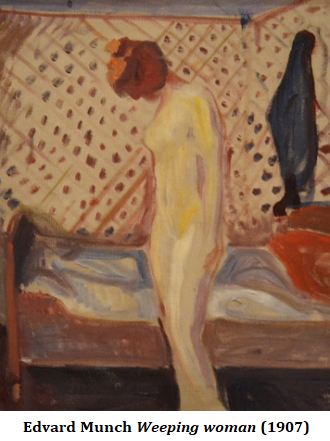 A 40-year-old woman lives not far away who hears voices coming out of the walls. They spy on her, they snigger and tell her how worthless she is. Sometimes they leave her alone for a while, but they always came back. When she announces to her diminishing circle of friends, not face to face but on social media, that she is feeling really up and confident, they sense that the high is coming on and the voices are just waiting for her fall. Like the man in the street, she is a resident of hell, not just a tourist [4].

Are her voices real? In a material world, it seems simpler and quite natural to believe that the voices do not exist. Go into the room from whose walls the voices come, and you would hear nothing coming out. Get right up close to her troubled head, you would not overhear what the voices say to her. From a purely material perspective, those who hear such voices, hear nothing real. They suffer delusions caused by drugs or mental illness.

What then should you make of the voices in your own head — the inner dialogues about what to do, what you should have said or done, whether you are going up or down in the world? You may talk to yourself, you may talk to your car, you may curse appliances that refuse to work. Are you mentally ill? Surely not. If you are happy, the internal voices are normal and healthy. If you are not happy, the voices are abnormal and unhealthy. Happy internal voices are a sign of order and unhappy voices of chaos. Self-help advisers do not blush in recommending you say positive things to yourself, and censor the negative things. Plant and feed the ‘life-affirming’ thoughts and your mind will grow happier, like a pretty garden. If pain persists, a psychologist or psychiatrist can join the battle against the noxious weeds that smother and depress the life within. Just as the heavy use of illicit drugs turns up the volume of unseen voices, prescribed drugs may turn it down. So it seems that, like the man shouting in the street and the woman with the walls that talk, everyone hears secret voices that are real, in their own way, after all.

The more difficult thing that the troubled people tell us is that the voices which they hate are not their own. The man shouting in the street does not curse himself, and the voices in the woman’s wall are certainly not hers. The voices display a malicious intent — they persist in attacking her and never speak a word of comfort or peace. The voices are intelligent enemies. The woman says they are demons put inside her by someone else. That is the meaning she has found to understand what is going on.

People have heard voices other than their own since time immemorial. In pagan times, oracles deliberately inhaled fumes or induced trances to hear the warnings and predictions from a world of spirits. In some places these things still happen. Oracles were religiously selected and rigorously trained. Rituals managed their transition into and out of their spiritual communications, and assistants protected them against mishaps and intruders. Long ago, Judaism, Christianity and Islam all forbade any attempt to contact the spirit world through oracles, mediums and soothsayers. Such practices were suppressed, not because they were useless but because they were dangerous. Those faiths affirmed the existence of spirits. Angelic spirits sent from God protected His people, brought them good news and warned them away from evil.  Demonic spirits, rebels against the Light, lured people to destruction, spread scandal and division and counterfeited virtue. Back in the 1960s and 1970s in the heyday of LSD and magic mushrooms, all sorts of people deliberately sought to enter the world of spirits. Some of them got lost forever in strange, dark places.

The effect of possession by the dark, subtle and destructive voices today seems very similar to what our forebears saw in much older times. Consider the following account of a troubled man:

For a long time he had worn no clothes, and he did not live in a house but in the tombs. He lived among the tombs; and no one could restrain him anymore, even with a chain; for he had often been restrained with shackles and chains, but the chains he wrenched apart, and the shackles he broke in pieces; and no one had the strength to subdue him. Night and day among the tombs and on the mountains he was always howling and bruising himself with stones[5].

Homeless, heedless of conventions and uncontrollable, such a man could easily be found in any modern city.

This particular man, however, was seen going towards a boat some 2,000 years ago as Christ was stepping from it onto dry land. When he stood before Jesus, a voice from within the naked man shouted:

The voice, according to the Gospel, was from the demons who possessed the man. Yet despite them, the man had still retained enough of his own will to come up to Jesus. Some flicker of light, perhaps some angel, inspired him to turn his back on the cemetery and go towards Jesus getting out of a boat so that he could be healed and the demons possessing him be cast out.

Nowadays neither demonic possession nor angelic inspiration finds respectable support as either a cause of mental disturbance or of its cure. Talking about demons and angels outside church is scarcely respectable at all. A cause, however, carries two meanings that bear on personal life. The first meaning, the focus of much attention, lives in the past, it was the cause that produced an effect. For example, the 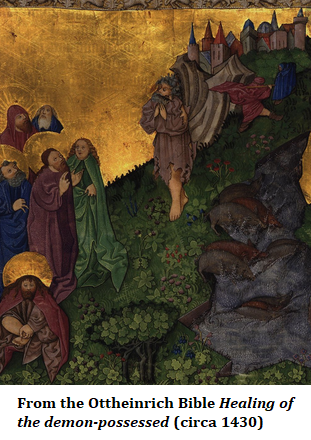 drug addict experienced a traumatic event, suffered a chemical imbalance in the brain or inherited a defective pre-disposition. These causes are in the realm of medicine, psychiatry and therapeutic care. The second meaning, which receives far less attention, lies in the future, it will be the cause that motivates a choice. For example, the addict may never want to risk his life again, may find a place that offers peace of mind, or some companionship that steadies his emotions. These causes are in the realm of values, ethics and purpose, where spirits, demonic or angelic, put choices before us that go to the heart of life and death.

These choices can be painful. The addict must give up getting high and bear a life of constant vigilance and discipline to banish the tormenting voices. The diabetic woman must disturb her rest with walking to safeguard future health. The woman with voices in her walls must give up the consolation of seeing herself as powerless and blameless for her troubled life and find a path to heal it. The choice these people make about what will motivate them will be the first cause in a chain of causes which determines whether their lives and the medicine, psychiatry or therapy succeeds or fails.

On the other side of a world in darkness there is light and an enchanted world of saints and heroes, and countless acts of love. An inner spirit and breath of life calls forth the greatest gifts that people have to offer. Unobserved and of her own choice, a carer in an aged care home sat silently beside the bed of a dying woman and held her hand. A schoolboy volunteered to spend an hour with a sick man he did not know. Inspiration is frequently witnessed in personal and unexpected moments. You can sense a spirit that moves people, communities and places, in single actions or in years of service. The world is full of such spirits, real but not physical, not made of matter but compelling and meaningful. Humanity has been living with its demons and angels for a very long time.

[3] As told by Willis Eschenbach, ‘Fixing the EGR’, on his blog Skating under the ice, January 2021.

The Masks That Blind Us