Our Treacherous Garden of Earthly Delights 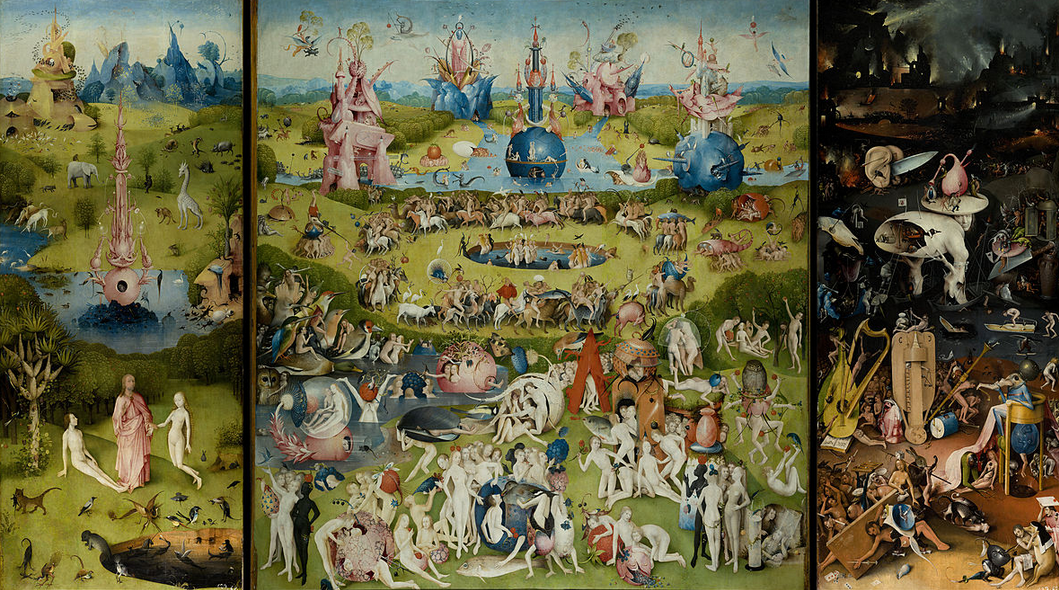 Recently, an unhappy person, who has been living on the fringes, sent a message to her friends that the darkness was lifting. She now understands the truth about herself, she knows the source of her problems and how to overcome them. She must love herself. She deserves happiness. She is re-programming her life, setting out to find earthly delights and to get rid of the demons within her.

Her message brought to mind a frightening picture of delights and demons in people’s lives, painted some five hundred years ago. A memory of that painting seems to have connected itself, not only to the unhappy woman, but also to two other modern people re-programming their lives. To find that connection, one must go back in time and space to see the picture, the world in which it was created, and the meaning it expressed.

The painter was Hieronymus Bosch (left), known in his own time as Jheronimus van Aken, or Jerome in English. He was born around 1450 and died in 1516. Little is known of his life. His father and grandfather were both painters, and the family lived in one of the main cities of the Duchy of Brabant, near a forest in which the dukes went hunting and from which the city took its Dutch name: ’s-Hertogenbosch, the Duke’s Wood.

In Jerome’s day, creative imagination played more freely with the abundance and immense variety of matter and living things. Strange animals, plants and minerals could inspire wonder, gifts fit for God and kings: precious gems, powerful herbs and majestic lions, bulls and eagles. They could inspire dread: symbols of sickness and evil in the wilderness, marshes or dark caves, sulphurous gases, toxic fungi and serpents, dragons and bats. Jerome revealed this abundant and varied creation through his art with fantastic plants, exotic animals, and hybrid creatures  of animal and human parts. The artist left us no explanation of his works, but perhaps he shared a common vision with the recently deceased physicist Freeman Dyson who said:

When we look at the glory of stars and galaxies in the sky and the glory of forests and flowers in the living world around us, it is evident that God loves diversity. Perhaps the universe is constructed according to a principle of maximum diversity. The principle of maximum diversity says that the laws of nature, and the initial conditions at the beginning of time, are such as to make the universe as interesting as possible. [1]

Dyson thought art could reveal truths about the world, not in the manner of science, but truthfully nonetheless.

Jerome’s vision of delight and dread in human life unfolds in a work painted on three wooden panels some time between 1495 and 1505 and nowadays called The Garden of Earthly Delights. The two outer panels, when shut to cover up the central panel, show the world in creation (below). There is light and darkness, the firmament has separated the waters from the earth, and plants are growing but as yet no animals. 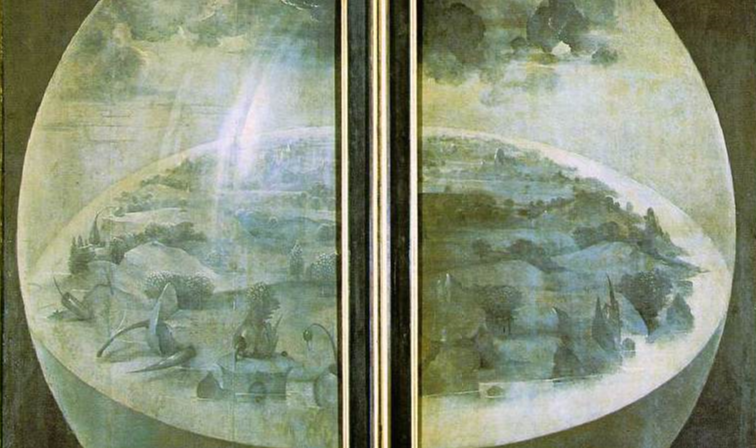 Opening the first panel, set in the Garden of Eden, we see the diversity of life in a peaceful setting. God is holding Eve’s hand as He presents her to Adam, whose feet are touching the hem of God’s robe.

Close to God’s feet, a three-headed bird looks towards a pond where a strange half-unicorn, half-seal is surfacing. To the left, a cat slinks off with a mouse dangling out of its mouth; to the right, a duck-billed creature appears to be reading a book. In the upper part of the picture, a plant-like structure towers above a lake. More familiar creatures — an elephant, a giraffe,  a profusion of birds — live alongside a dog-like creature, and a unicorn drinks beside deer and a cow. The earthly garden contains much to interest us, without being unruly or chaotic.

The central panel (below) shows another landscape. God is absent. Humanity is so riotously enjoying itself that it is hard to know where to start and where to go when looking at this picture. Swarms of naked people please themselves: having sex, eating, swimming, doing acrobatics, hunting and fishing, and otherwise mingling intimately with each other, with plants and with animals.

Yet things are out of joint. Certain animals have grown larger than life. Some people are living inside luscious fruits and parts of plants, and a few are even changing into hybrid animals and plants. In the lower third of the painting, a couple is being carried towards the water in the shell of a mussel, their legs dangling out. Will the mussel close and digest them while their attention is diverted? Nearby, a bird feeds a man in a blue eggshell. Fish are everywhere on the land; people are frequently in the water. In the Biblical world, water represented chaos which the sky and land kept at bay. Now, in disorder, the boundaries of life are breaking down, and untamed creatures are multiplying and moving into the centre of human life. 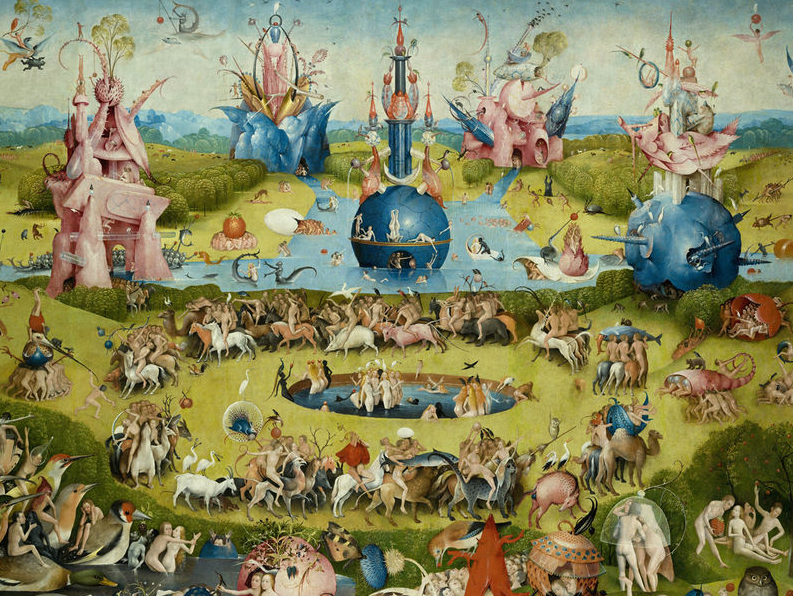 In the third panel, daylight has gone. In gloom, lit only by fire and moonlight, humanity and all its works are being destroyed. Monsters have taken charge.

At the top of the panel, fires and warfare rage through ruined buildings. Armies rampage through the darkness and countless people are swept along, naked and helpless in the blackened 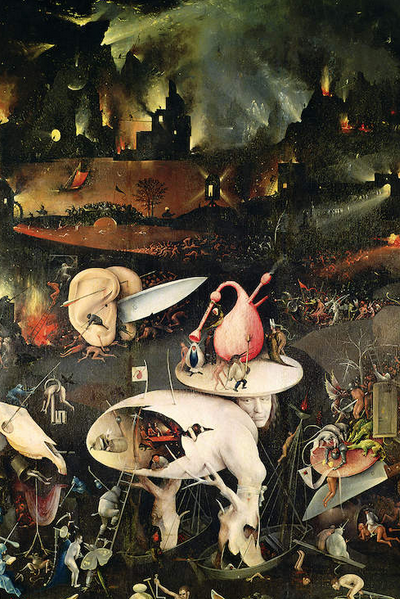 water. In the middle section, monsters wield giant knives and dismembered body parts. Lizard-like dogs devour a soldier. Below them (left), a lute, a harp and a hurdy-gurdy have turned into instruments of torture. A humanoid bird on a throne devours one man while defecating others. At the bottom right, a pig in a nun’s dress is getting a man to sign a legal document, perhaps a deed of sale for his soul.

Jerome’s three panels show first a harmonious creation living with God. Next, a riotous scene without God, where humanity does whatever it likes with whatever it finds. People have made gods of themselves and gods of their pleasures. Animals are growing more like people and people are becoming more like animals. In the final panel, monsters have taken charge, and the remnants of humanity are torn apart in pain and death.

To modern eyes, Jerome’s vision and weird creatures seem exceptional. In his day, however, he expressed mainstream Christian belief. He was a member of an important religious confraternity. Creatures of similar strangeness existed in copies of the Bible, made by hand in the monasteries. Scripture in immaculate lettering was introduced by garlanded capitals, luxuriant illustrations and elaborate borders. In the margins, copyists brought to life the ‘marginalia’: devils, strange people, irreverent cartoons, bizarre animals and birds. It was a way of showing the proper order of the world. The Word at the centre of the manuscript showed God at the heart of all things, bringing meaning to humanity; the garlands, illustrations and borders glorified and protected the Word; and the creatures in the margins showed the quirky forms of life that did not fit together, fruit from the tree of life cut off from the tree of knowledge[2].

Today, long after Jerome’s death, strange lives are still lived on the margins. In January 2020, the Chicago Tribune[3] reported the story of a man and a woman, named Myles and Precious. Myles was born female, but had become ‘male’ and his wife, Precious, was born male but had become ‘female’. They had married and decided to have a baby. The report goes on:

To have biological children, they had to go off their gender-reinforcing hormones, which was difficult for both of them. An egg from Myles’ body was fertilised with sperm from Precious and implanted in Myles’ uterus via IVF.

It took two years of IVF procedures to succeed. In due course, the pregnant Myles went into hospital and the baby was delivered. Naturally, the child’s birth certificate recorded Myles as the mother and Precious as the father. Myles, the ‘male’ and Precious, the ‘female’, were shocked:

‘It was so crazy’, said Myles, 38, of Chicago. ‘I never even thought the birth certificate would have to misgender us in that way … It was really breaking my heart.’

They hired a lawyer, and just two weeks later the state of Illinois issued a new certificate with Myles as father and Precious as mother.

It takes time to get one’s bearings in this story. A man and woman love each other but they have reversed their gender identities, using drugs to break down the bodies in which they were born in order to grow new bodily structures. Then they wanted a child, for which they needed other treatments to restore, to some extent, their original sexual potential. The child was born, and the parents went back to their reversed identities. They were shocked and heartbroken that the person who conceived and bore the child was certified as its mother. Though they live in a society that gives them acceptance and goodwill, that is not enough. If they say a man has had a baby, then everyone must say so too, most especially the government. The authorities obliged them and repudiated the truth.

Jerome painted this world five hundred years ago. His garden of Eden represents the abundance and variety in the potential of each human life. His garden of earthly delights, the life cut off from knowledge, mingles and multiplies without meaning. The last panel reveals the result: metastasising monsters deforming and destroying life.

If we hope for a better outcome, truth and knowledge must be restored. Is it perhaps more truthful to see human life as a story, not an identity?  Even a tree begins as a fruit or nut that decays to release its seed, which perishes in its turn to make the seedling, the sapling and then the tree. Biographers give meaning to human lives through a narrative that connects the parents to the child, the society to the adult and the life to the choices made. The final judgement depends on what the person gave back to the world through the potential that lay within them.

Thinking now of the woman living on the fringes, the one who wrote to her friends, and her forthcoming pursuit of enjoyment, one might reflect that she is a lonely creature who might go easily astray in the garden. The Canadian psychologist Jordan Peterson urges his unhappy patients to do what is meaningful, not what is pleasant. St Augustine, no stranger to earthly delights himself, urged us to give away ourselves to our neighbours and to find meaning in God because ‘no-one among humankind knows what it is to be a human being … but You know everything about him because you made him’[4].

We make our choices, but as the physicist Freeman Dyson noted:

… life is possible but not too easy. Maximum diversity often leads to maximum stress. In the end we survive, but only by the skin of our teeth[5].

One must hope that the unhappy woman survives her intended journey.

Michael Dunn is a writer, currently living a secluded life in Sydney.