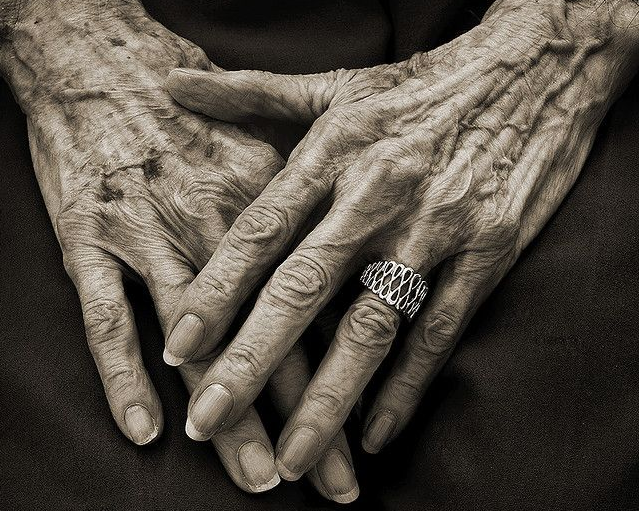 I have seen a husband caring for his wife—and their four young children—in the last months of her life as she suffered from breast cancer. I have witnessed an elderly woman look after her husband of more than 50 years but who no longer recognised her. And I sat by my own father’s bedside through his final days of palliative care. Each of these experiences was precious, even though they were marked by heartache and loss. As former NSW premier Mike Baird has argued so well, never in the history of the world have we become so adept at palliative care. And yet, the push for euthanasia is now all but complete, with NSW the only state in Australia still committed to protecting those who are most vulnerable.

There is a plethora of reasons why medically assisted suicide is a bad idea. People might try and coin all kinds of politically correct euphemisms, but that’s precisely what it is. Alex Greenwich, the independent MP responsible for introducing the legislation into the NSW parliament recently said:

Without the option of voluntary assisted dying, people who receive bad news about their terminal prognosis live in fear and, sadly, the rate of death by suicide among people who are terminally ill is high.

What Greenwich fails to realise is that his bill wouldn’t reduce this figure while making the option of self-murder all the easier to access. As I have argued elsewhere, to introduce such legislation at the height of a worldwide pandemic in which the elderly are the most at risk is stunning for its audacity. But such is the contemporary moral and political dissonance we are witnessing.

Dr Hannah Graham, lecturer in criminology at the University of Sterling, and Dr Jeremy Prichard, associate professor at the University of Tasmania, have produced an excellent report which outlines the numerous reasons  why legalising euthanasia is so problematic. First, the bioethical. At the heart of this issue is the role of medical professionals. In particular, are they healers, helpers or killers? Significantly, a national survey in the United Kingdom has shown that the majority of doctors do not support the practice of euthanasia. What’s more, our own Australian Medical Association (AMA) has also been highly critical of the practice. Dr Christopher Middleton has stated:

I think it would completely change the mind-set and the ethos of medicine in Australia because in their practice, in training, doctors tend to see themselves as agents of hope and healing and comfort, and certainly not as agents of death.

Second, the potential for elder abuse. The European Court of Human Rights put it this way, “…that the risk of abuse inherent in a system which facilitated assisted suicide should not be underestimated.” As Dr Pritchard, in an op-ed writes:

In coming decades we face a rapidly aging population, a shrinking tax base and increases in health problems like dementia…euthanasia could form part of government planning for service provision for people nearing end-of-life…If that sounds far-fetched, consider two cases from Oregon where patients’ applications for medical treatment were rejected, but followed by departmental notifications informing the patients they were eligible for assisted dying. 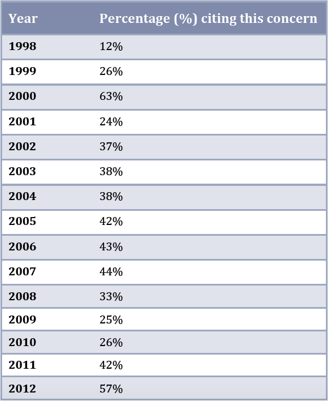 Third, the psychological pressure to end one’s life. Note the table at right, based on statistics from Oregon, which shows that since euthanasia has been made legal in that US state there has been a significant and steady increase in people giving the reason for choosing euthanasia so as not to be a burden on their family and friends.

Fourth, is the negative societal perception of those who have a disability, with their deaths being treated as an act of ‘compassion.’ Graham and Pritchard writing:

The implication that some people are ‘better off dead’ and that ‘some lives are not worth living’, phrases which have been used internationally in euthanasia debates, are potentially offensive and stigmatising to those who live with the same or similar symptoms and conditions.

Constance Putnam has argued, there is a fundamental problem with framing the issue this way since “a ‘right to die’ is, in a very real sense, a curious concept. To have a ‘right’ to something that will inevitable take place regardless of circumstances or actions – like dying, for each of us – seems odd. As Putnam states, “I can think of no other right that any one of us might have to anything so universally (and absolutely predictably) inevitable.”

Fifth, is bracket creep. What has been observed in countries that have legalised euthanasia is that the wishes of family members have pressured the patient to be choose to be euthanased. What’s more, there is widespread under-reporting of the practice, and there has also been a significant increase in the use of ‘terminal sedation’ resulting in the patient’s death. For instance, Dr. Philip Nitschke, one of the leading proponents for legalising euthanasia, has been quoted as saying:

In the intervening 16 years since the Northern Territory Rights of the Terminally Ill Act came and went, the debate on voluntary euthanasia has been extended beyond those who are terminally ill, to include the well elderly (sic) for whom rational suicide is one of the many end of life options.

Sixth, the ‘safeguards’ of psychiatric referral and assessment are gradually ignored. Graham and Prichard state:

In the Flanders region of Belgium approximately half of euthanasia cases are not formally monitored as doctors do not report them to authorities. The rate of underreporting in the Netherlands appears to be between 20%-23%. 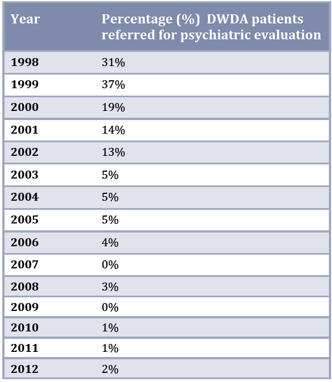 What’s more, in Oregon the percentage of people being referred for psychiatric evaluation has dramatically decreased, as can be seen in the table at left.

Seventh, is the eventual practice and acceptance of non-voluntary euthanasia. In Belgium, where euthanasia has been legal since 2002, it has been observed that people were put to death without their consent. Similarly, Holland has now introduced legislation to euthanize patients suffering from dementia without even their verbal consent! What’s more, nurses have taken upon themselves, without the presence of a doctor, the responsibility of administering euthanasia drugs.

Eighth, numerous countries have examined and rejected it. No country should feel that it is on the “wrong side of history” in rejecting this practice when the majority of countries around the world have decided against its legalisation.

Ninth, is the associated guilt when a medical professional is involved in ending another person’s life. For instance, Dr Kenneth Stevens, after researching this particular aspect, makes the following finding:

The physician is centrally involved in PAS and euthanasia, and the emotional and psychological effects on the participating physician can be substantial. The shift away from the fundamental values of medicine to heal and promote human wholeness can have significant effects on many participating physicians. Doctors describe being profoundly adversely affected, being shocked by the suddenness of the death, being caught up in the patient’s drive for assisted suicide, having a sense of powerlessness, and feeling isolated. There is evidence of pressure on and intimidation of doctors by some patients to assist in suicide. The effect of countertransference in the doctor-patient relationship may influence physician involvement in PAS and euthanasia.

Tenth, there are gendered risks, especially for women. There is a growing body of academic literature which highlights the ‘disproportionate victimisation of women’. As Prichard and Graham explain:

It is vitally necessary to carefully consider the potential for gendered violence and familial control to be directly or subtly influential, if not implicated, in matters of the ‘voluntary’ assisted death of women. Where there has been coercion, control and gendered violence in a woman’s life, the nature of which may often be kept hidden and secret from others (including in professional and personal relationships) in her life, it is important to ask whether this might be a factor in a woman’s death.

All of which should make one stop and ask the question, “How would I like to be treated?” As a financial burden? A personal inconvenience? Or with love, respect and dignity. Especially when you are at your most vulnerable in your hour of greatest need. Euthanasia is not an act of compassion but, on so many levels, the crudest form of cruelty.

Mark Powell is a Presbyterian minister