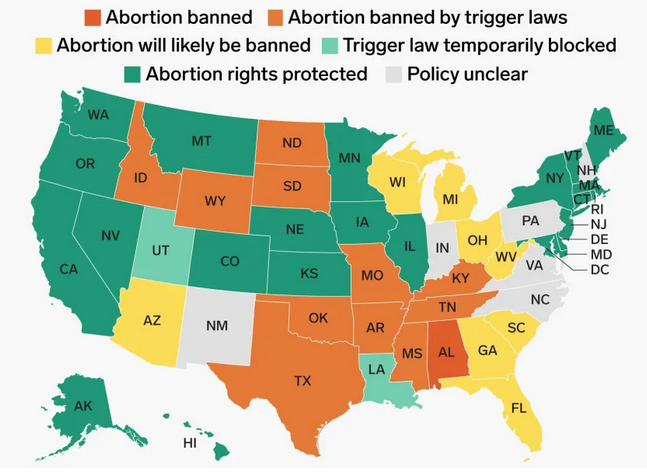 Declan Mansfield, in Abortion: The Pursuit of Common Ground recommends to us a “middle ground” in the abortion debate. To set the scene he represents the public reaction to the overturning of Rowe v Wade as an ill-informed racket emanating from “partisan fringe groups”, writing that the “decision does not do” what these groups claim. Whilst this is true of the (literally) screaming feminist left, and of their water-carriers in the mainstream media, it is clear that Mr Mansfield has not been listening carefully.

No-one in the pro-life movement, as exhilarated as they were by the decision, was under any illusions about what it meant. Such groups immediately produced patchwork maps (above) of the the US states in which abortion immediately became illegal, those in which such legislation is pending or intended, and those in which abortion provisions are to be strengthened. A constant pro-life theme has been that, in many states, the hard work was just beginning.

Nonetheless, if one is to present one’s position as  “the middle course, the one most people like myself believe — advocates of the ‘golden mean’, as Aristotle said,” the distance at which the “extreme” positions must be pitched is more or less predetermined. And so, Mr Mansfield presents his two extreme opposing positions as “a woman’s right to choose” and “abortion is murder” respectively, and proceeds to criticise them.

“The first falls at the obvious objection: that in multiple situations individuals do not have the right to choose another person’s death,” he notes. Another criticism is that one line of feminist argument “treats women as if they are delicate, childish creatures with no agency…”. Mr Mansfield then pivots 180° the opposite extreme; to wit, that abortion is murder. I will quote the argument in its entirety, lest I be suspected misrepresentation by omission.

Murder requires intention and nobody with a shred of intelligence can believe that a young girl with her life ahead of her or an older woman struggling to raise her kids (except if there’s a financial inducement), would intentionally become pregnant. Human beings are sexual creatures and the idea that a mistake, or accident, stemming from a nature hardwired into our genetics, into our social life, and into our very being, should be punished with an unwanted child, and hence an unwanted life trajectory, is wicked. We cannot force women into a life they didn’t voluntarily choose.

The first clause is beyond reproach. But the “intention” is universally taken to mean the intention to take a human life, exclusive of judicial, policing or wartime exigencies. Not here. Mr Mansfield, to his credit, has already dismissed one of the standard absurdities of the pro-death crowd; that the unborn child is not a human person. “The unborn child … is also important, because of what the child will become, the life as yet unlived, and the pain that the child could experience when being aborted.” So the second condition of the definition–that a human life is taken–is met.

By constructing his other extremity around “abortion is murder,” Mr Mansfield has boxed himself in. To extricate himself, he points intention in a different direction. The emotional core of his argument is the supposed tragedy of the unintended consequences of an unintended pregnancy. His problem is that his laudable integrity, shown in his  refusing to dehumanise the unborn child, collides with his own definition of murder. A full stop after “Murder requires intention,” and his argument collapses, so he must plunge ahead and hope to invoke the sympathy of his readers for the “young girl,” who sounds for all the world like one of those “delicate, childish creatures with no agency.”

Again to his credit, My Mansfield does not rush to the pro-death gang’s first line of skirmish–cases of pregnancy arising from rape and incest. He stays close to the day-to-day reality of abortion. This is a world in which the connection between sex and pregnancy has been almost completely severed. Sex is part of “our social life.” It’s just part of the getting-to-know-you ritual for men and women who have expressed some level of interest in one another; on a par with delving into the other’s taste in politics or movies. In this world, an unplanned pregnancy is a system failure, a punishment, threatening an “unwanted life trajectory.”

It is not, though. It is the system working as designed, as everyone had known since the rise of human self-consciousness. The introduction of the most potent psychotropic drug ever to gain mass acceptance–The Pill–has in 60 years almost completely destroyed our understanding of what it is to be human; of what it is to be a man or a woman. However, that young girl does have agency. So does the mum for whom that new baby is financially or emotionally undesirable. They chose sex. Is their responsibility diminished by reason of insanity? Of invincible ignorance? Did they place losing bets on the spurious understanding that the odds of becoming pregnant were vanishingly small?

Only the baby has no agency, responsibility, or guilt in any of these circumstances. What crime has the baby committed that carries a death sentence? The only crime is being inconvenient to the mother, the father, or both.

Before even setting up his goalposts at opposite ends of the field, Mr Mansfield has laid his cards on the table. “[F]or people like myself who see clearly, I would like to believe, both sides of the subject…[a] live woman is more important than an unborn child.”

Were this statement on a par with, for example, “The Prime Minister is more important than I am,” it would still be false except on some utilitarian calculus. The comparison between the Prime Minister and me is understood to be specific in scope and limited in its implications. It is not a statement about our intrinsic worth. Mr Mansfield’s claim is universal; it applies to every pregnant woman and every baby in the womb. What is truly startling about this claim is that it is supposed to justify the intentional killing of the less important by the more important. Consider what wide applications such a useful principle might have. Consider how vital it would be to have friends of friends on the Importance Tribunal.

Back in the seventies, when abortion was first being legalised, it was hedged about with “safeguards.” Abortion was only to be available when there was a grievous threat to the mother’s health, it was only to be available early in the pregnancy, and so forth.  That initial opening led, with logical and psychological inevitability, to the very recent legislative barbarism in our State Parliaments. Perhaps Mr Mansfield is too young to remember, but his “middle course,” his “golden mean,” does not even take us back that far. The only reason needed to take this less important life is the desire to do so.

There is no way out of the logical quagmire of abortion, neither for the heavily pregnant woman who has written on her exposed belly, “NOT YET A HUMAN,” nor for Declan Mansfield, whose equivalent motto might be, “A less important human.” Ugly terms have been applied, in quite recent times, to less important humans in order to justify and to incite murder. But the sheer number of the abortion dead of the past 50 years–a triumph of modern medicine–puts all the Utopians of recent history to shame.

If Only Alan Joyce Knew About Dubai