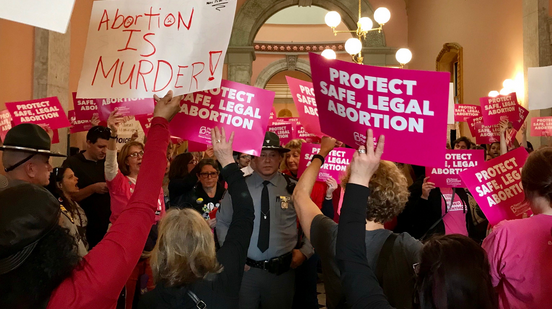 One of my favourite quotations, which I think of whenever I hear a loud and vehement voice, is by the Irish politician and philosopher Edmund Burke:

Because half a dozen grasshoppers under a fern make the field ring with their importunate chink, whilst thousands of great cattle, reposed beneath the shadow of the British oak, chew the cud and are silent, pray do not imagine that those who make the noise are the only inhabitants of the field.

I was reminded of the quote when, within moments of the United States Supreme Court overturning Roe vs Wade, hyper partisans decrying or supporting the decision went into overdrive online and in the media. The fact that the decision does not do what either side of the partisan fringe claims it does is par for course in our almost wholly irrational times. What the decision should do, however, is focus the attention of those people who, like me, stand in the middle of this debate and who want a civilised and common-sense legislative approach to an issue that, contrary to the loudest voices, can never have a definitive ethical or moral answer. In other words, both sides in this debate are right and wrong and neither side has a franchise on morality. The issue, to be clear, is too complicated and serious for the virtue signalling, cheap slogans and petty internet memes that usually accompany the subject of abortion.

The issue of Roe vs Wade is not one limited to the ethics and morality of abortion, however. It goes to the very heart of what is meant by the term democracy. Do people have the right to make decisions about their lives or should a technocratic elite make those decisions for them? Should rights be enshrined in the law to an extent that they are beyond democratic decision-making processes? Those who favour Roe vs Wade and who are horrified at it being overturned were not bothered by these issues when Roe vs Wade was legislated in 1973, even when it explicitly went against the United States Constitution, which delegates some powers to the federal government and other powers to the states. The Founders, in their wisdom, created a system that gave democratic power to the people while having as many checks and balances built into the system as possible.

The practical implications of how this works on the surface are simple to explain. Should people, for example, who support abortion, have the right to access abortion services in their state? And, in contrast, should those people who reject abortion on moral grounds have the democratic right, if a majority decides, to cancel abortion provision in their state? That’s the issue. The overturning of Roe vs Wade does not outlaw abortion in America, it returns the decision to the people in the individual states. Some states will reject abortion and some states will accept abortion. Some states will expand how abortion is provided, and some states will limit that provision. As it is, the laws governing abortion in America are far looser than they are in most First World countries, which is an irony considering the most vocal supporters of Roe vs Wade outside America are not aware that, often, their own countries have much stricter guidelines about abortion that the despised Yanks.

The issue, though, of abortion itself is a thornier problem, made even more difficult for people like myself who see clearly, I would like to believe, both sides of the subject. To put this in perspective. A live woman is more important than an unborn child. She exists, and she is part of a network of relations that have grown organically throughout her life. She is important, both to herself as an individual, and in her relationships with other people. The unborn child, though, is also important, because of what the child will become, the life as yet unlived, and the pain that the child could experience when being aborted. Partisans on both sides of this issue have relied on simplistic slogans to further their agenda, which, unfortunately, and, as usual, have influenced the less thoughtful members of society. State something enough times and rational thought goes out the window.

“A woman’s right to choose” and “Abortion is murder” are perfect examples of simplistic logical fallacies. The first falls at the obvious objection: that in multiple situations individuals do not have the right to choose another person’s death, or, not even, ironically, their own death. To give one example, it is illegal to help another person  commit suicide. Also, if nobody other than women have a right to make decisions about abortion, then, if advocates of abortion are being fair, honest and principled, they should legislate that men cannot be compelled by law to provide for a child up to the age of eighteen. The current situation is a perfect example of how feminists have created a system where women know that heads they win and tales you (men) lose. (He has no right to an opinion on abortion because you’re a man; she is entitled to a portion of his money for eighteen years because of her subjective decision. Also, if she rejects direct payments from the father of the child and relies on the government to pay for the child’s welfare, she is still relying on men to pay for the child’s upbringing. Men pay most taxes).

The other argument directed at men that they shouldn’t have, to be crude, stuck it in, treats women as if they are delicate, childish creatures with no agency and who are the victims of disgusting male lust. This is at odds with the mirror image propaganda from feminists of the “strong” and lusty woman who, without a second thought, “explores” her sexuality like an Amazon humping her way to Mount Olympus. Both these ideas can’t be true at once. Although feminists, to give them some credit, I think, have been arguing for decades that the philosophical law of non-contradiction is a “male way of knowing“. Logic is male, in other words. Work that one out the next time there are calls to increase the participation of girls in STEM subjects.

The side who believes that abortion is murder is also deluded. Murder requires intention and nobody with a shred of intelligence can believe that a young girl with her life ahead of her or an older woman struggling to raise her kids (except if there’s a financial inducement), would intentionally become pregnant. Human beings are sexual creatures and the idea that a mistake, or accident, stemming from a nature hardwired into our genetics, into our social life, and into our very being, should be punished with an unwanted child, and hence an unwanted life trajectory, is wicked. We cannot force women into a life they didn’t voluntarily choose.

That being said, the middle course, the one most people like myself believe — advocates of the “golden mean”, as Aristotle said — is that abortion should be available, but only up to a certain time in the pregnancy. The exceptions to this general rule being those unusual circumstances like rape, or a medical complication where a different ethics applies. In contrast, the idea, articulated by actress, writer and social media personality Lena Dunham and shallow buffoons like Madonna, that women should “shout their abortion” is so abhorrent as to be disgusting. It cheapens human life to the level of an utterly utilitarian calculus without a thought beyond the instant gratification of a spoilt brat. There are many human actions that we don’t go out of our way to inform the world about. Having class is attempting to rise, at least publicly, above our animal selves.

The idea that life is in some way sacred is utterly indispensable for a civilised society. Its opposite notion, a common sense and rational approach to practical problems, is also indispensable. Abortion up to a certain time during a pregnancy is the only way to satisfy these seemingly mutually conflicting ideas in a way that most of the population, the non-partisan and ostensibly quiet middle, will accept.

Ignore the grasshoppers. Wait for the cattle to make a noise, they make more sense.

18 thoughts on “Abortion: The Pursuit of Common Ground”

The Rise of the Neo-Puritans