Foley at the Melbourne Festival

I went to see Foley at the Melbourne Festival last week to reacquaint myself with aboriginal history and the sparkling repartee of what I remembered of the 1970’s Gary Foley. So it is Gary Foley playing Foley.

The stage has piles of boxes, some marked ASIO (Aboriginal Secret Intelligence Organisation), a desk with a laptop, and four very big screens facing the audience. “Redemption Song” is playing as the tiered semi circular space fills with about a hundred people. The show starts with some archival footage circa late sixties, of a twenty something bearded hungover Foley in a long dero’s coat, berating a white middle class woman whilst lying on the concrete outside a public building. Toward the end of his tirade he says “I’ve got no time to talk to insignificant little shits like you” and with that the music sounds and Gary Foley, the sixty-one year old, enters to great enthusiasm and applause. 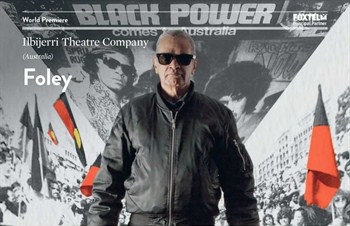 Foley joking (ironically) defines history as “something that never happened written by a man who was not there” together with several other similar quotes and adds that there are “some of those histories you ought to know, and I ought to know if you ought to know.” He shows the aboriginal nations map on the big screen and tells us that – BC (Before Cook) there were hundreds of aboriginal nations across Australia.  Yet Australia saw itself as the last bastion in this part of the world for white people and thus the first Act passed by the first Parliament was the Immigration Restriction Bill – the White Australia policy – Australia was obsessed about race. Four actors (on screen) read examples of the “white supremacist notions” held by Billy Hughes and others. Foley then draws a fascinating connection to his great grandfather, Jim Doyle, who was the secretary of the Nambucca Heads branch of the Australian Aborigines Progressive Association. The AAPA was a radical, aboriginal only, organization established around Northern NSW during the 1920s. The AAPA relates back to the Universal Negro Improvement Association set up by Marcus Garbie and people like Jack Johnston who inspired aboriginal people when he came to Australia in 1908 to defeat Les Darcy for the heavyweight championship of the world.

Foley claims that these were the most sophisticated political thinkers of their time compared to the white supremacist thinking of the whitefellas (already mentioned). Foley has never been shy about his Marxist/Anarchist revolutionary thinking but I am surprised to see that there have been several generations of black revolutionary communist thinking involved in the development of his œuvre. I expected him to make some connections with Frank Hardy and other members of the Australian Communist Party   – The Unlucky Australians and the fight for equal wages by aboriginal stockman in the NT. The eight year long Wattie Creek strike. However it is not mentioned.

Foley moved to Redfern in Sydney as an “impoverished landless refugee” in 1966. In the next few years about thirty thousand other disaffected aboriginal people from all over NSW also moved into Redfern as the State run reserve system closed down. Foley does not however make mention of the fact that the 1967 referendum also allowed aboriginal people to drink and buy alcohol freely and equally as full citizens for the first time. This may well have had as much to do with the exodus to Sydney as anything else. He does not explore aboriginal alcoholism and drug addiction which was rampant in Redfern at that time. He does not celebrate the ninety percent affirmative vote at the referendum to be a display of Australian solidarity and acceptance of aboriginal people, but more a moral victory of human rights and justice, finally, over the usual racists who must have somehow disappeared into the ten percent.

The lecture goes on through a significant display of events and achievements – indeed an extraordinary contribution to Australian intellectual and political life by an extraordinary man who still regards himself as a revolutionary. He draws out aspects of his relationship with the Black Panthers and Malcolm X and talks about his ASIO files. Foley believes still, in multicultural Australia, that “assimilation equals genocide”.

He relates the story of the aboriginal tent embassy which was indeed one of the greatest and most successful political tactics of the twentieth century and finishes off stating that “Native title is a joke and a fraud” and that “No Mickey Mouse bullshit apology from Kevin Rudd is reconciliation or justice.” The struggle goes on, he says.

Interestingly, Foley made no mention of the Wattie creek strike in the NT as a significant factor effecting the granting of land rights by Whitlam in 1976. Nor does he mention the Provisional Revolutionary Aboriginal Government. Disappointingly, he does not explore the intimate connection between various brands of communism and black arm band aboriginal activism which I thought might provide some insights into his and Marcia Langton’s now very open and welcoming definition of aboriginality. Particularly since he has demanded aboriginal only membership of so many of the worthy self help groups he and his organization set up (Aboriginal Legal Aid, Aboriginal Health Services, Aboriginal Theatre Companies). He does however, find time to mock a letter he found from Keith Windschuttle offering support to an activist aboriginal group in Darwin in about the late sixties, perhaps early seventies. Foley finds it remarkable that Windschuttle would support radical aboriginal action. I find it more interesting that Foley seems astounded that Windschuttle could support aboriginal people.

There is nothing at the Melbourne Festival that is not loud leftwing and multicultural. So inclusive, it has all become exclusive. Foley was the best choice for a citizen starving for drama, but somehow it all felt a little flat – that all this greatness and all these liberations had finally only led us deeper into discontent.

Much to Celebrate, More To Do