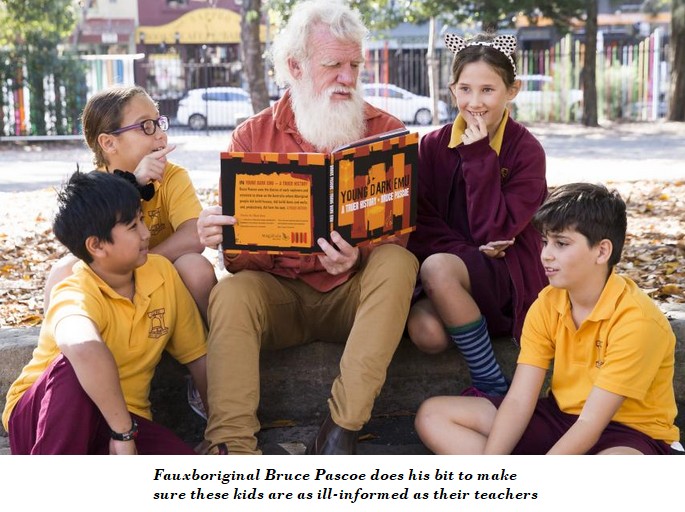 Previously, I regaled you with my abortive attempt to have my own book, Bitter Harvest, mentioned in the Dark Emu article in the People’s Republic of Wikipedia.  The upshot of that quixotic endeavour was that ultimately I was cancelled as a Wikipedia editor – not even allowed to post in my own defence on my own talk page. It seems the NSW Department of Education practices the same technique.  On September 6, I emailed the NSW Minister for Education, the Hon Sarah Mitchell, a stalwart of the National Party:

Dear Minister,
I have written to you a number of times in the past regarding the use of Bruce Pascoe’s book Dark Emu as a resource in NSW schools.  You deputed Ms Kate Wootten to reply, which she did but failed to answer my question.  So I followed up with her nominated contact and received another unsatisfactory reply from Ms Jennifer Curtis.  Here is the text of my follow up email to Ms Curtis:

Thank you for your response to my email.

Unfortunately, you have failed to answer my query.  Ms Wootten has told me:  ‘All historical sources are critically analysed for reliability, usefulness and perspective and no source is used in isolation.’

My question is, who has carried out that critical analysis in respect of Dark Emu and what alternative sources were involved in that evaluation?

And please do not tell me yet again that Dark Emu is not a mandated text.  As far as I am concerned that is irrelevant.  Would the Department tolerate the inclusion of, say, Mein Kampf in a school’s resources on the basis that it is not mandated?  Does the Department exercise no oversight into what material is regarded as suitable for use in individual schools?

I look forward to your substantive response”

I have heard nothing further from Ms Curtis.

Perhaps you could direct your staff to respond materially to my perfectly reasonable question,

Thank you for your letter of 6 September 2021, to the Hon Sarah Mitchell MLC, Minister for Education and Early Childhood Learning, regarding the book Dark Emu. The Minister has asked me to respond on her behalf.

As indicated previously Dark Emu is not a mandated text in NSW public schools. School principals and teachers, as subject matter experts, in consultation with their school community, are best placed to assess the needs of the school and to determine the suitability of teaching and learning resources that complement the curriculum. This includes the selection of primary and secondary sources in the study of history.

I understand that you have previously raised the same issue, in a number of letters to the Minister and Department officers, and have been provided with the same response.

Please note that future correspondence from you on this issue will be placed on file, but will not receive a reply.

I am still framing my response.  Having been told that I won’t receive a reply, you might wonder why I would bother.   That’s as may be but, on the off-chance that it might at least be read, my reply will certainly contain an assurance that I won’t, under any circumstances, be voting for a Liberal or National Party candidate at the next state election.

I daresay that wouldn’t cause the Honourable Minster to lose any sleep, not least because her term in the upper house does not expire until 2027, but I hope my voice will be heard by many like-minded people here at Quadrant who can make their own decisions about supporting a party that prefers weasel words to principle.

It strikes me as odd that the department would have mandated texts, i.e texts that must be studied, but no category of texts that may not be studied.  What kind of quality control are they exercising before they dole out our hard earned cash to, apparently, unaccountable principals and teachers?

Recently I was invited to address the University of New South Wales Conservative Club on the subject of the Dark Emu controversy, in which I described Pascoe as Australia’s most successful conman ever. You can view the video here. Towards the end of that talk I observed:

Despite the brief furore engendered by Sutton and Walshe, effectively the good ship Pascoe sails serenely on.  So where to from here?  The most successful conmen are defended by their victims and never called to account in a material sense.  Pascoe’s awards and appointments won’t be withdrawn.  His royalties will continue to flow.  The best we can hope for is that he eventually fades into obscurity and with him his book.

My job is to help make that happen sooner rather than later.  And it starts with getting Dark Emu expunged form institutions like the ABC and our schools.  It’s a slow process.

Education Minister Sarah Mitchell’s apparent disinterest in removing what is essentially a blatant left-wing piece of propaganda from the NSW curriculum (mandated or not) says it all about the Left’s long march.

From a culture wars perspective, Dark Emu is the low hanging fruit – debunked from both Right and Left.

The problem is us