Until an idiot with a microphone asked the Prime Minister in Perth if her boyfriend is gay, it seemed we might get to the bottom of at least one of the Sideshow Alley productions in which Julia Gillard begins as Joan of Arc and ends up playing the Bearded Lady. Alas, that hope has now vanished, as the cream of Australia’s working press abandon one burlesque production to pursue the next. The freak shows are coming so fast these days it is hard to keep track.

On Tuesday it was a spittle-flecked rant against men in blue ties, a bizarre performance from which reporters were barred and thus precluded from putting the obvious question, “Prime Minister, was your mother scared by a haberdasher?” They might also have tested her grasp of federalism, as abortion law is a matter for the states and there is very little Tony Abbott will ever be able to do about it.

Well, the press might have put that question, but upon reflection probably not, given the docility with which the gallery accepted the instruction to wait outside for their Gillard-approved sound bytes. Our Prime Minister quite likely detests the very memory of Joh Bjelke-Petersen, but the two as are as one in recognising modern reporters as an easily pleased breed of poultry. So it was a case of feed the chooks some packaged crumbs for the evening news, observe their gratitude and then wait for the ever-reliable gal qaeda auxiliaries to fill the op-ed pages with more denunciations of sexism and misogyny. It had worked before, so what could go wrong? With the press barred, and John McTernan’s artfully arranged Young Labor ladies for a backdrop, it wasn’t as if the roof might catch fire, numerous people drown or another billion-or-so be flushed down state-of-the-art school toilets.

It didn’t quite work that way. When even the likes of Eva Cox plug their ears against the shrillness, something has gone seriously astray. True, Fairfax favourite Anne Summers ran up the flag, but no surprise there, as the dinosaur feminist and the dying media group are of one mind in understanding that modern journalism demands fealty to your side’s latest talking points. Summers’ effort was exemplary, decrying Abbott’s view that abortion should be “safe, legal rare” because such terminology “really upsets women”. This scolding was delivered despite those very same words having also come from the lips of the columnist’s favourite Prime Minister.

A competent editor might have saved Summers from the embarrassment of her own words, but if any such specimens still exist their objections must have been drowned by colleagues guffawing at cartoonist Michael Leunig’s latest half-measure of wit (below). 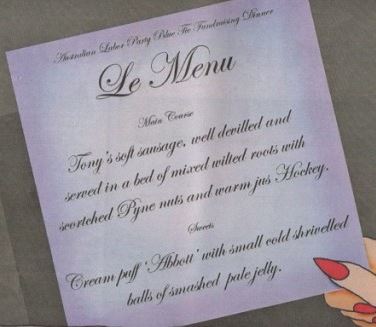 “Small cold shrivelled balls” indeed! Who says Leunig is good only for ducks and Holocaust gags?

With the Prime Minister’s aversion to azure neckwear drawing fire from the sisterhood and talk surging yet again about her prospects of remaining in office until the election, a distraction was needed – and, miraculously, one appeared at just the right moment.

On Tuesday night, a Brisbane chef re-tweeted the alleged menu from a Mal Brough fund-raiser held 10 weeks earlier. We all know what happened next: a document of dubious provenance, distributed by a nobody who had earlier said he would prefer to be “raped by an AIDS-infected pit bull” than see Abbott in The Lodge and whose Facebook page reflects an enthusiasm for centrefold lesbianism,  was hailed as a champion of truth and women’s rights. Andrew Bolt, Tim Blair and Sinclair Davidson have all done forensic analyses of the so-called Menugate “scandal” and its timeline, and those who need a further reminder of why election reporting by Fairfax and the ABC must be taken with a truckload of salt should visit their posts for a refresher course.

As for the bemused rest of us, we are out of luck. Just when a small subset of working reporters was asking if McTernan and the Prime Minister’s office were orchestrating Menugate’s symphony of outrage, Perth radio’s Howard Sattler decided to press Gillard on what he saw as the biggest question of her time in office: is your beau hot for other blokes?

Sattler could have asked about the AWU scandal, Bill the Greek’s renovations to Gillard’s former home, an ongoing police investigation, those missing files and the circumstances of her departure from Slater & Gordon. As Sattler’s radio station is owned by Fairfax and those same questions saw 2UE’s Michael Smith yanked off the air, he could have played it safe and inquired why our feminist Prime Minister had declined to back women for pre-selection in the seats of Gellibrand and Batman. Or, if he was determined to focus on the First Defacto, who was behind the wheel when the couple’s Commonwealth-supplied car racked up a stack of speeding fines?

The blue-ties business, already fading, vanished almost entirely from media organisations’ news lists, soon to be joined by Menugate, with Radio National directing Anne Summers to the nearest World Today broadcast booth, to hold forth on the semiotics of Sattlerism. She is flogging a new book — on sexism, of course — and this was mentioned, but not why it affronts women to hear Abbott echo Gillard’s own sentiment that abortions need to be "rare".

Now, as journalists once again play stenographer, it is back to the familiar themes of sexism and misogyny. Apparently, when a fool asks a woman if her partner is a homosexual, it is a further attempt by the patriarchy to exclude the second sex from public office. This tack may surprise non-reporters and women not sharing their lives with male hairdressers, but count on the chooks to peck where directed, as they will do for the next three months.

And after that? Well, what usually happens to plump, tender and, in the ABC henhouse, grossly overfed fowls?

UPDATE: The Menugate myth continues to grow, this time underwritten by the CSIRO, a slather of universities and, of course, the public purse. The author, Jenna Price, is a journalism lecturer, which may explain rather a lot.

In Denmark, a Bruising Multiculturalism