Was the Rudd government simply doing a pre-launch publicity campaign for Tim Burton’s new 3D film version of Alice in Wonderland, or was it just business as usual and we had only forgotten to take off our special 3D glasses after watching Avatar?

It was certainly the week that Kevin Rudd fell down a rabbit hole.

What does seem real is that Lewis Carroll isn’t dead — but living somewhere in Canberra — and he’s still up to his old tricks. I mean who else but Carroll would come up with political characters like Peter Garrett as the Mad Batter… or Julia Gillard as The Red Queen. Or Jenny Macklin as The Dormouse.

But it is a lesser character, who has been quietly working away in Wonderland, that should be attracting our attention … Senator Chris Evans. 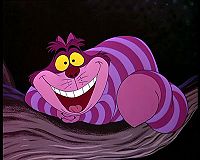 He is undoubtedly the nation’s Cheshire Cat, in his very soft, quiet, unassuming role as Minister for Immigration.

Going almost unnoticed, two weeks ago, was an interesting broadcast on the ABC’s Radio National Rear-Vision program centered on “Illegal Immigration” which exposed (unintentionally) some interesting aspects of this now-expanding industry, and how well it flourishes under the auspice of the United Nations.

The first alarm bell to ring, while listening to this program, was the use of the expression “irregular immigration” as opposed to the more accurate term “illegal immigration”. Wonderful how political correctness softens things — like putting Cuddly Fabric Softener in the weekly wash. “The roughness simply fades away”.

The second interesting notion was a comment by a guest on the radio program, Senior Researcher from Oxford University, Dr Franck Duvell, who stated:

There is a significant number of migrants who demand a certain service, and there are people who are ready to provide this service, so what is commonly called people smugglers could also be called informal travel agents.

Strangely, two week later, Minister Chris Evans was onto the “informal travel agents” caper by announcing the introduction of The Anti-People Smuggling and Other Measures Bill to be introduced to the Parliament the following day. The Bill creates a series of new offences for providing material support for people smuggling and the actual offence of people-smuggling itself.

Another extraordinary observation emerged from the Rear-Vision radio program and that was by Professor Mark J Miller of the University of Delaware, who stated:

Most [illegal immigrants] are adjudicated not to be bona fide refugees under the Geneva Convention.

Tens of thousands of people who are in refugee camps (fleeing from war or insurgency) are quietly awaiting decisions on their application to migrate to Australia, while illegal boat arrivals jump the queue. Let’s hope they have something to read while they wait… something like Alice in Wonderland! 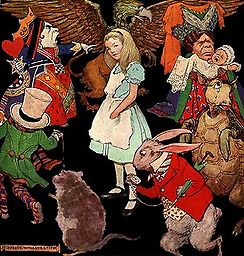 In the Wonderland world of illegal immigration you would imagine that the elected government of Australia would be able to sort out exactly who was a genuine refugee, in danger physical harm, and who was an economic immigrant or who indeed was simply a queue jumper. Not so! Other than on issues of health or security, the Australian government or the Australian people have absolutely no say at all! The United Nations and it’s bureaucrats make the decisions. It is a sort of “you are what I say you are…no more, no less”.

Why does John Howard’s famous cry “We will decide who comes to this country and the circumstances in which they come” suddenly sound so sensible?

Professor Miller went on to explain that prior to 1970 there were few asylum seekers; but many hundreds of thousands of refugees escaping war or Fascists regimes.

Generally only high profile people like say Rudolf Nureyev, defecting from the USSR, were considered refugees likely to suffer persecution if they were sent back to their country.

What changed was that “migratory chains” became established. Legal types saw the loop-holes in the UN Charter. And to get a clear picture of those loop-holes a reading of the UNHCR Handbook on Procedures and Criteria for Determining Refugee Status (1992), is essential.

What becomes clear on reading this manual is that there is virtually no hope of a country like Australia refusing to accept people who claim “refugee status”. It is a total Catch 22 situation. The general definition of a refugee “is a person with a well founded fear of being persecuted for reasons of race, religion, nationality, membership of a particular social group or political opinion, is outside the country of his nationality and is unable or, owing to such fear, is unwilling to avail himself of the protection of that country…”

What muddies the waters here is that Kevin Rudd and Chris Evans, continually justify illegal immigrants arriving in Australia as “victims of war”, which seems to fall outside the normal UN definition of refugees, that is refugees in fear of persecution.

One can only wonder why the hundreds of millions of dollars that is spent in the Rudd resurrected “open-doors” changes to the Immigration Acts, wouldn’t be better spent providing benefits and welfare in the form of food, housing and medical-aid to the refugee camps bordering Iraq, Afghanistan and Somalia, and indeed in Sri Lanka.

Now that would be really doing something worthwhile.

The humanitarian aid and sympathy should be for the hundreds of thousands of people herded into war-refugee camps, not the few thousand who can miraculously find the $15,000 to pay the “informal travel agents”.

But in Kevin Rudd’s Wonderland things aren’t always what they seem.

P is for Poison