Come the Moment, Come the Man 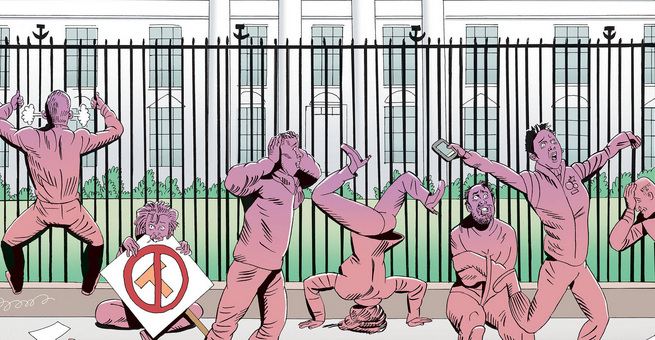 Trump haters are most prevalent in the United States but they are everywhere, including in our midst. Troy Bramston was at again the other day in my morning Australian newspaper, the price of which has just risen by 17 percent. A case of getting less for more. “Biden in the White House would be good for us,” is its title. Aptly pedestrian for both the article and the writer.

Of course, Biden in the White House would be a disaster for Western civilisation and the Free World but, never mind, apparently, he “aligns better with the Morrison government’s international priorities.” What follows from Bramston is tendentious tripe and not fit to print. Like his Washington correspondent colleague, Cameron Stewart, his anti-Trump bias is regularly on tiresome show. But, let’s face it, Trump haters are a dime a dozen throughout the Australia media. More disconcerting is the way the hateful hacks have poisoned the opinions of ordinary people.

Best to regularly make a little list of the Donald’s dreadful deeds during what Bramston calls “Trump’s disastrous presidency.”

# He’s led the US into no new wars

# He’s rebuilt the US military (you know, the military we depend upon)

# He’s relocated the US embassy in Israel to Jerusalem (long promised, never delivered until Trump) and recognised the Golan heights as being part of Israel (a must-have for Israel’s defence)

# He’s curbed illegal immigration, including with a wall (OK, the Mexicans didn’t pay for it)

# He reduced regulations and taxes, producing US energy independence and, before COVID hit, the lowest Black and Hispanic unemployment on record; combined with an upsurge in real wage growth

This list is by no means exhaustive. Though, as you can appreciate from the above truncated list of his achievements, he has much to answer for. And I haven’t even mentioned COVID. Trump sure messed that up.

True, he moved quickly to shut down travel from China and Europe, orchestrated a lockdown advised by the sainted duo Fauci and Birx, made sure medical equipment and hospital beds were available to meet the expected surge in cases but, critically, he didn’t look glum enough. Glumness might have saved lives. Churchill was the same. That inane victory sign persuaded people to stray too far from bomb shelters, costing lives.

Let me concede what others might have suspected. I can’t stand those on this new woke left. Before COVID came to further diminish their good sense, I could just about stand them. At least, I could, for a few minutes at a time. But Dan-worshipping, the finger-pointing at those who refuse to cower in the face of the least-deadliest plague ever to afflict mankind; at those who don’t don their masks or keep their distance, is well beyond insufferable. Does anyone take these censorious scolds seriously?

Well, yes, as it happens. The likeminded. And they are a legion and growing. Incubated in universities, a neo-Marxist lifeform, more deadly than any virus, has metastasised throughout schools, the media, public services, the political class and corporate boardrooms.

We are not dealing any longer with mere differences of opinion. That’s long gone. That’s why there can be no amity. No grand bargain. No working across the aisles. This, quite literally, is a fight for survival.

I fear we now occupy the ‘worse case’. But let’s still keep hope alive. Four more years of Donald Trump might give us at least a ‘precarious chance’ of survival. It’s a long shot.

Let’s have a proper probe

#1 With A Bullet in North Korea