Pell Acquitted, You Say? Well the Show Must Go On 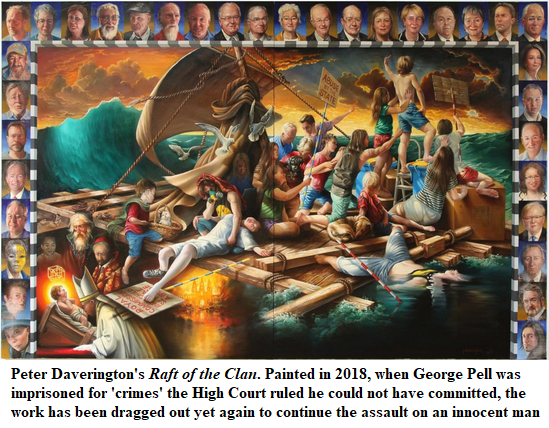 You would think that the acquittal of Cardinal George Pell might have drawn a line under the child sexual abuse saga, especially in Victoria, where it reached its highest level of hysteria. You would think that two decades of no reported child abuse of any sort in the city and Roman Catholic diocese of Ballarat, where a few errant clerics, now unfrocked and imprisoned, were responsible for abuse on an epic scale a generation ago, might have reassured locals and the world at large that a shameful chapter of history was over. You would think that people of compassion and common sense might agree that the best course now, after “survivors” have been apologised to by everyone from the Prime Minister down and handsomely “compensated”, would be to forgive, if possible, and try to forget.

You might think all those things, but you’d be wrong.

Child abuse put Ballarat on the world map for a time, and child abuse, if that city’s civic art gallery’s best efforts succeed, is going to put it back. Why let the Ballarat “brand” drift away on the tide of fading memory when it can be “refreshed” and forced on the public’s attention again? When child abuse subsided as the issue obsessing the nation, when the revelations and the finger-pointing ceased on account of there being nothing more to reveal and no one new to point a finger at, what was Ballarat to do? Slide back into the provincial tedium in which it had languished since its gold ran out? No, the gallery decided, the “survivors” should be dusted off and paraded centre stage again so that their experience could be re-lived – in full colour, like a remake of a popular movie.

And so we have Out of the Darkness: A Survivor’s Journey, a “major exhibition” at the taxpayer-funded Art Gallery of Ballarat. The particular survivor whose peregrinations are visually chronicled is Robert House, described as “a survivor of institutional child sexual abuse” not further specified, other than he says it occurred in Sydney, not Ballarat. He “sees art,” rhapsodises the gallery website, “as a vehicle to challenge deeply entrenched power structures within society” (no prizes for guessing what they are). House is the curator of the exhibition, which he regards as the fulfilment of his quest for “justice”. Ballarat Gallery seems to see it as their very own chamber of horrors. “We encourage visitors to attend this exhibition,” warns the website spookily, “with a family member, friend or support person” (how about an enemy you want to frighten?).

“Out of the Darkness,” writes a Ballarat newspaper, “depicts individuals and groups linked to child sexual 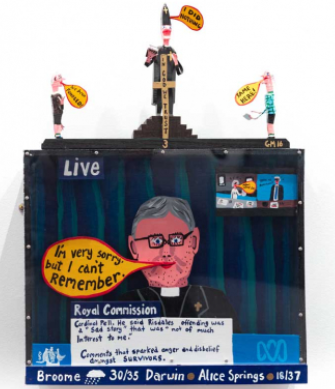 abuse, heroes, survivors and their stories, alleged perpetrators and those who have been charged or convicted.” With cynical disregard for his acquittal by the High Court, which the abuse lobby, the ABC and leftists in general still like to pretend was a technicality, not a declaration of innocence, Cardinal Pell is dragged on stage as a representative of the three last categories. “Survivor” Glenn Morgan snipes at him in a kindergarten-level work called “I Saw Nothing, I Heard Nothing, I Did Nothing” (right) in which a caricature priest is gazing out of a confessional with a speech bubble saying, “I’m very sorry but I can’t remember.” Below, labelled “Royal Commission”, we read “Cardinal Pell. He said Ridsdale’s offending was ‘a sad story’ that was ‘not of much interest to me.’ Comments that sparked anger and disbelief among SURVIVORS.” It is true that Pell did say that and no doubt regrets it; he meant, clumsily, that the abuser and erstwhile priest Ridsdale was outside his area of responsibility. But whatever he had said, Pell’s absence from an exhibition of this type would have been unthinkable. Cultivated resentment like this needs a scapegoat. It’s so unfair, the organisers must be thinking, that the successful appeal spoilt the whole symmetry of this cautionary tale, in which evildoers get their deserts, not acquittals. 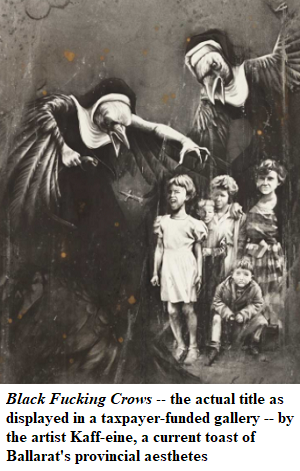 The most prominent exhibit is a reworking of Géricault’s The Raft of the “Medusa” by New York-based Peter Daverington, who says he “settled on the idea of survival at sea as a metaphor for the survivors of child abuse –they were abused by a system entrusted with their care.” To compare the plight of shipwreck survivors, dying of thirst and exposure, with that of “survivors” of abuse is a heartless and absurd exaggeration.

A problem with collective wallows in guilt and innocence like Out of the Darkness is that you never know who’s telling the truth. Why, for example, is Peter Clarke not among the exhibitors? He has all the requisite qualifications. He’s an artist, he was in a Ballarat orphanage for 18 years where he says he was abused, and, according to ABC ace reporter Sarah Ferguson, subjected to further abuse at a swimming pool by none other than Pell himself. Yet the same Peter Clarke had told the Ballarat Courier in 2005 that he had “loved” growing up in the orphanage. “It was great fun,” he said. His “toughest time there,” the paper quoted him as saying, “was when he was released.” Did the ingenuity of Quadrant Online in uncovering his blithely delivered contradictions cost Peter a place in the show as someone who had let the side down by unwittingly demonstrating that not everything a “survivor” says is necessarily true?

The cynicism of the Ballarat Art Gallery and its publicity-seeking director Louise Tegart in staging this exhibition is breathtaking. It will do nothing to help survivors who are genuinely emotionally damaged; nothing to meet, as the exhibition blurb piously puts it, “the need for compassion and support within the community for people dealing with the consequences” of child sexual abuse; nothing to advance those concepts beloved on the Left of “healing” and “reconciliation”; and nothing to further the less fashionable one of forgiveness, which is surely what every human error requires. It is simply a cynical attempt to cash in on suffering and guilt so that Ballarat again shines in the light of modish attention and tourists with a taste for factitious and self-righteous anger return to the city. That it is meant to perpetuate child sexual abuse as a Ballarat attraction is demonstrated by the involvement of Continuous Voices, “a community-led project working towards creating a permanent memorial space in Ballarat to acknowledge all survivors of sexual assault and sexual abuse and those,” in the genteel locution of the gallery website, “who are no longer with us.”

This exhibition is an abuse of art because it is not about art but propaganda and revenge.

12 thoughts on “Pell Acquitted, You Say? Well the Show Must Go On”

Abbott, the Antidote to Turnbullemia