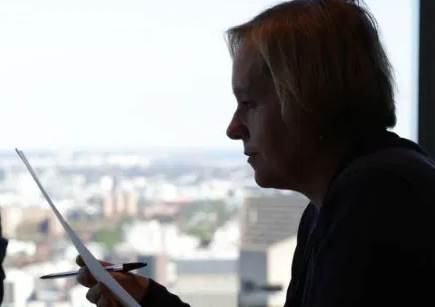 It isn’t the Ballarat Courier or a printout from the ABC’s own archives Ms Ferguson is studying.

UPDATE: The ABC has now taken down Sarah Ferguson’s third installment of Revelation, scratching it from iView and all other platforms. Why was it broadcast in the first place? — rf

When a star reporter and her crew are sent to Ireland and Italy with a brief to detail the perfidy and perversions of Catholic priests, considerable expense must necessarily be incurred. Given that the ABC’s Sarah Ferguson returned with not much to show for her travels, other than re-caps of stories already known and often told, the shock-horror third installment of the ABC’s Revelation series was obliged to find the meat of fresh allegations closer to home in Ballarat. It was there, the national broadcaster claimed, that “two new victims” of Cardinal Pell were unearthed. They weren’t new at all, but this is the ABC, so let that pass.

As noted in the post below, one of those alleged victims was artist Peter Clarke, whose earlier comments to the Ballarat Courier paint a picture of an orphanage nothing like the house of shame the ABC would have viewers believe. It was a pleasant place to grow up, he told the local rag.

Revelation made no mention of this and, to be fair, that is understandable. It would have required a few minutes’ research and, with bags to pack and Rome and Dublin waiting, who has the time to turn up facts that might ruin a good story?

Much harder to understand is why gun reporter Ferguson didn’t check her own news organisation’s archives. Had she done so this story, a piece on a Ballarat art show written by an ABC local correspondent and colleague, would have appeared on her computer screen in a millisecond (emphasis added).

…A painting very close to Peter’s heart is that of an Aboriginal flag cut in four segments. Titled ‘Ward of the State’, a photo of him as a child from the orphanage and his file sits in the middle of the pieces.

“This represents my family to me. They were good to me at the orphanage and did the right thing by me,” he tells, happy to speak about a childhood that has such an impact on his life…

Some things are easy to overlook or ignore — including, evidently, the ABC’s very own back files.

Revelation made no mention of Peter Clarke’s happy childhood, favouring instead accounts of abuse and exploitation alleged against a much younger George Pell, who the ABC would have us believe was possessed of powers only slightly less extraordinary than his purported ability to flit about a bustling cathedral after Sunday Mass, slip away unnoticed and rape not one but two lads in an open room whose decor at the time was nothing like what was subsequently described to police. All of that while bundling voluminous vestments and using not one or two of his hands but all three of them — yes, three! — to control his victim. In Ballarat, says the ABC, the future cardinal’s evil superpowers allowed him to probe the young Mr Clarke’s anus through his bathers. Yes, through!

Tuesday morning’s High Court ruling on Cardinal Pell’s appeal will be harder for the ABC to ignore than was Mr Clarke’s happy childhood. That will be especially the case if the Justices make mention in passing of the media slanders that did so much to set the stage for the conviction and imprisonment of an innocent man.