From Washington, the Latest ABC Disgrace 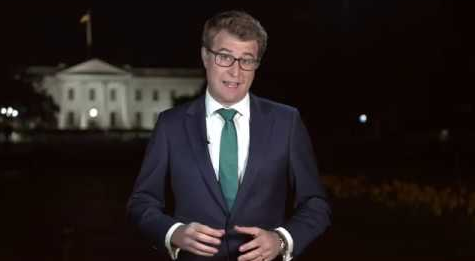 The ABC’s coverage of Donald Trump on Saturday night was, as usual, spattered with bile. North American Correspondent David Lipson (above) on flagship 7pm TV News appeared to be competing for the Democrats’ laurels with colleagues Kathryn Diss and James Glenday, whose take on the election is similar. There is only one ABC narrative about Trump: he is a clown and a heartless villain, and Joe Biden is the world’s saviour.

Saturday’s Trump item is worth dissecting vis a vis the ABC’s impartiality charter. The item’s tone, snipping of material footage and deceptive content are what we viewers get nightly; it’s nothing unusual.

The item begins with the contemptuous placard, “Trump’s America”. The ABC never ran negative US material (such as the city riots of that era) with a placard “Obama’s America”, nor do I expect the ABC will re-write the placard as “Biden’s America” if Biden wins in November and Antifa continues to burn US cities.

Under Saturday’s heading the ABC writes: “Explosive allegations.” Wow, the ABC says this anonymous scuttlebutt is ‘explosive’ three times in one news piece. I recall that 100 or maybe 1000 of the ABC’s Russiagate stories for two years from anonymous officials were also “explosive” and/or “bombshells”. But as the Mueller report found, that whole munitions dump didn’t have the punch of a penny bunger

ABC policy is that some accomplishments of Trump can’t be ignored, like peace deals or record Black/Hispanic employment (pre-covid). Hence the ABC accounts must be dominated by some hostile  addition, no matter how puerile or phony.

In Saturday’s case Trump had secured an historic economic agreement between Serbia and Kosovo. The 1998-99 war there claimed about 14,000 victims and displaced about 1.5 million. Kosovo’s status remained indeterminate.  But Lipson and his ABC editors award Trump’s Serbia-Kosovo rapprochement 12 seconds, to be offset by 138 seconds for a tale of anonymous smears. These smears  claimed that Trump said US military dead were “suckers” and “losers”, and that Trump avoided a 2018 trip to Belleau Wood cemetery, a little over an hour’s drive from Paris, because rain might muss his hair.

Here’s how Lipson spins, and note his speedy and graceful pivot from the Kosovo agreement. We first see a formal Trump confirming agreements to normalise Serbia-Kosovo economic ties: “I am pleased to announce a truly historic commitment”. Lipson snarks, “… as another military stoush dominates the headlines [of the Trump-hating liberal media]… an explosive report in the [Trump-hating] Atlantic claiming the President labelled America’s war dead ‘losers’ and ‘suckers’.”

Cut to Trump saying, “No, it was a fake story”.

Lipson: “In Paris 2018 Donald Trump’s no-show on a commemoration ceremony was blamed on bad weather grounding his presidential chopper.[i] But four un-named sources claim the President was more concerned with his hair in the rain, telling senior staff, ‘Why should I go to that cemetery? It’s filled with losers.’”

The ABC cuts to Trump: “It’s hoax, just like the fake dossier hoax and the Russia-Russia-Russia total hoax.”

This ABC technique is to evoke the MRDA response, i.e. Mandy Rice-Davies Applies –  ‘Well he would say that wouldn’t he!’ Lipson could have spliced in here Trump’s former National Security Adviser John Bolton demolishing the smears but that would leave Lipson with no story. So Bolton is kept till last in the ABC editing suite.

Another sly ABC trick is to snip and use from any Trump response just a few rhetorical phrases (“It’s a hoax”), and never let us know the substance. In this case here’s what the ABC might have quoted Trump, but chose not to:

What animal would say such a thing? And especially since I’ve done more, I think more than almost anybody, to help our military to get the budgets, to get the pay raises for our military. So I just think it’s a horrible thing that they are allowed to write that. We can refute it. We have other people that will refute it…they made it up. Probably it’s a couple of people that have been failures in the administration.

Not enough air-time for quoting Trump more fully? Don’t you believe it. Any 7pm bulletin has multiple minutes of pure piffle as though no time constraint exists.

The Atlantic’s story about Trump wimping out of the cemetery visit to preserve his hair-do is a meme the ABC and its media minions can’t let go, even though it was scotched at the time and scotched again in Bolton’s tell-all book last June, The Room Where it Happened: A White House memoir. Bolton wrote that the trip by the presidential Marine One helicopter was called off because of weather concerns, and driving was not an option because it could have taken up to four hours for the round trip, much of it in traffic-choked Paris where the President could be boxed in. “The press turned cancelling the cemetery visit into a story that Trump was afraid of the rain,” he wrote. Remember, author Bolton is  a Trump adversary, not backer.

But what if Bolton were mis-remembering? Nope. Documents were sought and rather surprisingly obtained, under US Freedom of Information. The key document to or from Marine One reads:

I made a bad WX call for today’s lift. We have a USAF weather SNCO at Belleau Wood and have been in contact with the French as well as Presidential Wx in the rear. We will not support today’s mission.

It is one thing for the ABC’s Lipson to retail scurrilous gossip that might be true. It is another thing, and irresponsible, for their ABC to give airtime to Leftist conspiracy memes that have been fully and publicly discredited.

ABC radio that Saturday also did a 10-minute ‘report’ on the “suckers and losers” anonymous claims. The piece at least had the decency to give Trump perhaps 20 seconds to respond. But who did it choose to interview about Trump? Bruce Wolpe, former Democrat operative and Julia Gillard’s chief of staff, who (surprise!) delivers Democrat talking points. The ABC’s bias hides in plain sight. One reality is that Trump has increased defence spending each year after Obama cut military spending, cut troop numbers and even created shortages in military spare parts. David Lipson, please note.

Some questions are relevant (but it would never occur to the ABC types to ask them):

# The leakers are reportedly top military and administration types who left Trump’s employ or were sacked. If they’re so big on military honor and personal ethics, why won’t they step up and put their names to the leaks?

# If Trump’s allegedly shocking comments were made in late 2018, why have those former high-rankers chosen to leak them only now, a couple of months from the election?

# The media is already rowing back from half the purported scandal. Reporters are now saying Trump used the word “suckers” in relation to Viet servicemen on a different occasion. (Bad, of course, if true).  What credibility does this leave for The Atlantic’s purported Belleau Woods expose, which included, “In a separate conversation on the same trip, Trump referred to the more than 1,800 marines who lost their lives at Belleau Wood as ‘suckers’ for getting killed.”

# Since the calumny by leakers about Trump not wanting wet hair at the cemetery is indisputably a crock, what credibility do the leakers retain?

But let us return to 7pm, which saw Lipson continue:

The report also claims that the president told staff to exclude amputee veterans from a military parade because ‘nobody wants to see that’,[ii] and that he strongly resisted honoring the death of war hero and Senator John McCain  whom he had clashed with before.

The claim about McCain could be part-true but not the whole truth. The pair were sworn political foes — McCain was one of the first to shop the spurious Russiagate dossier about Washington, and it was his solitary vote which scuttled Trump’s bid to repeal Obamacare. The causes for enmity notwithstanding,  Trump did honor the deceased McCain by flying his casket and family to Washington on the equivalent of Air Force 2.

Lipson:  Candidate Biden, whose own son served in the military, labelled the comments disgusting.

Note that to the ABC, the comments are no longer “allegations” but comments of fact. I never did any fancy journalism course at Melbourne University’s Centre for Advancing Journalism, but somehow I still picked up quite early that the word “alleged” should be attached to derogatory claims about persons, until verified. I’ve put in a complaint to the ABC about its failure to say “alleged”.

Lipson next cut to Biden, who appears to say: “These statements are true. The President should humbly apologise to every Gold Star mother and father.” Biden actually said, “If these statements are true …” I’m not claiming any ABC conspiracy here; Biden mumbles or swallows the ‘if’. But Lipson and/or the ABC didn’t even try to clarify.

Lipson then interviews Khizr Khan via laptop. Mr Khan, whose son was killed in action in Iraq in 2004, says

The President’s words are a window to his soul.  He can’t conceive a world where one person values someone else more than they value themselves, and that is our son’s life, that is the life of every soldier.

Khan took the podium at the 2016 Democrat convention to denounce Trump and then got saturation media sympathy when Trump responded in kind.[iii] Lipson trots Khan out again in support of the bogus allegations, rather than wasting ABC time fact-checking them.

Lipson resumes his snark, continuing to imply the “suckers and losers” allegations are true and discomfiting for Trump:

The President is in damage control, reversing a decision by the Pentagon to close a military newspaper.

Does Lipson magically know the President’s motives or is he just cut-and-pasting that stuff from the anti-Trump press?

What? He must mean Associated Press, Washington Post and Fox News, who all did no more than repeat The Atlantic‘s initial and still unsubstantiated slur. None named their sources or provided documentation. Does Lipson know what “corroborate” means?[iv]  The Washington Post later quotes reporter Mollie Hemingway:

Lipson continues that the claims are, “denied by numerous White House officials past and present.” Why not name them? They were on the record, unlike anonymous smearers. One was Sarah Huckabee Sanders, then press secretary and taking part in the relevant discussion. “This never happened,” she said.

“This is not even close to being factually accurate,” added Jordan Karem, the president’s personal aide at the time.

The Lipson item finally cuts to John Bolton: “I didn’t hear either of those comments or anything resembling them.”

Lipson omits that Bolton was present at the relevant discussion – this would have interfered with the ABC narrative. A non-ABC version of Bolton words goes like this

“I didn’t hear that. I’m not saying he didn’t say them later in the day or another time but I was there for that discussion.”

Lipson concludes: “As usual it is now a case of competing truths, and high stakes.”

So by this time the ABC is openly implying the smears are true, “without evidence” for this, as the ABC is wont to interject about allegations by Trump and Republicans. However untrustworthy the ABC is in its Trump coverage, Lipson is certainly right about the “high stakes” involved.

[i] The cemetery involved the US dead of the Belleau Wood battle.

[ii] This could be recycling of a probably true story about Stalin circa 1946, ordering the roundup of disfigured Soviet veterans into the Gulag, because their begging and homeless state belied the Soviet paradise.

[iii] The Guardian called Khan’s Democrat podium speech “a seven-minute tour de force that became the emotional heart of one of the biggest weeks of the election campaign.” Trust the ABC to utilise Democrat operatives, however sad it must have been for Khan to lose his son.

Want Turnbull? Take Him, He’s Yours