What a Fine Mess They’ve Made of Ollie 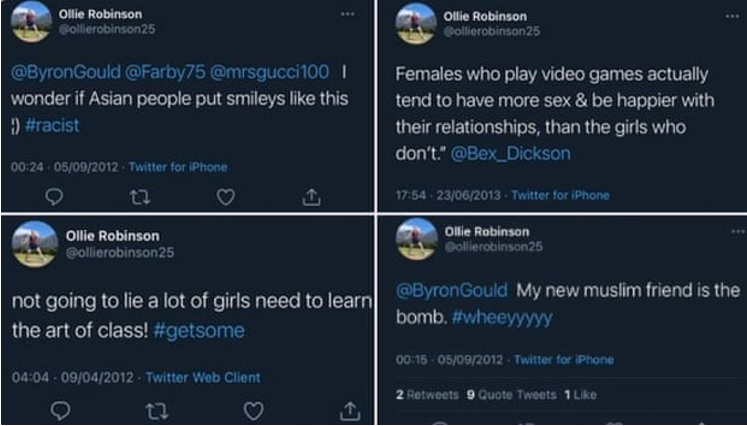 Ollie’s been outed and ousted. Such a pity. No sooner did we (us England cricket supporters) get a good cricketer who didn’t mess up on his debut, but we find out he’s a rotter. Or was a rotter when he was eighteen years of age, nine years ago, in 2012. Mind you, Prince Phillip was the same kind of rotter, according to a sensitive cohort at King’s College London.

Joleen Clarke, associate director of the university’s libraries, committed the sin of sending a picture of the Prince with the Queen opening a library at the college in 2002. This apparently triggered some sensitive souls, including an anti-racism group at the university, because of Prince Phillip’s “history of racist and sexist comments.” Ms Clarke subsequently apologised for sending out the picture, having “come to realise the harm that this caused members of our community.”

I will give a well-known example of the Prince’s “racist” comments: During a visit to China in 1986 Prince Philip told a group of British students: “If you stay here much longer, you’ll all be slitty-eyed.” At the time he was 65 years old, not eighteen. I have picked out this terribly regrettable comment by the Prince because it accords, I think, with one of the tweets from Ollie Robinson. Atop this page is a snapshot of four Robinson tweets.

You will see the first one has parallels with the prince’s comment.  Trying to be funny has pitfalls. Clearly both Robinson and the Duke were trying to be funny.  Let me guess. I wouldn’t be surprised if occasionally the Chinese make racist comments when joking about us moon-eyed, dough faces. I dare not go into what they might say about black people.

Before getting our knickers in a knot we have to question whether untoward comments are malicious or just simply gauche. I suggest the latter applies in nearly all cases.

As for being sexist, give me a break.  ‘Girls who play video games tend to be more sexually fulfilled’ and ‘Lots of girls need more class’. You might disagree with these observations. Personally, I doubt the accuracy of the first but admit to having done no research. As for more class, I do myself sometimes think, when seeing some girls passing on a night out, that they should, perhaps, cover themselves a little more. Other than that, I’m not sure what Robinson means.

I am sure that neither comment reaches some shocking, caddish, level of sexism. Google ‘mean tweets about men by women’ if you want an overdose of sexism.

The fourth tweet in the frame “my new Muslim friend is a bomb” — a reference presumably to Islamic suicide bombers — is not the kind of comment one should put about. But remember, 2012 was only seven years after the London underground bombing which killed 52 people and injured hundreds, and even sooner after bombings in Mumbai in 2006 and 2008 which left 375 dead, and in France in March 2012 which left seven dead — barbaric events tending to scar us all.

Also, it is best to remember, more generally, when holding people accountable for youthful indiscretions that our brains are not finished developing until around the age of twenty-five. To boot, Ollie seems to have been a bit of a lad – drinking, late nights and what not. Probably an indiscretion or two is on the cards.

Is it possible these days to have perspective? He didn’t rob, cheat or kill anyone. He made some poor jokes when young. He has apologised. And for this he is suspended from all international cricket and, no doubt, his county will join the lynch mob. This is the man’s livelihood they are messing with. What’s wrong with a dressing-down and a fine?

Of course, the problem these days is virtue signalling.  Ollie’s indiscretions are a godsend to the holier-than-thou brigade. The more they pillory and punish him, the more virtue reeks off them.

Former England captain Michael Vaughan joined the pile on, reportedly saying: “Yes, he was 18, but I do find that staggering that the ECB with everything, the resources that they have in their operation, they don’t go through everything about every player that you pick just to make sure you have got everything covered.” Presumably then, he should never have been be picked. Banned. Shunned. Driven from the game. Nasser Hussain thought the tweets to be “horrible” but at least had the common sense to remind people that “an 18-year-old does make mistakes.”

Hear, hear to that.