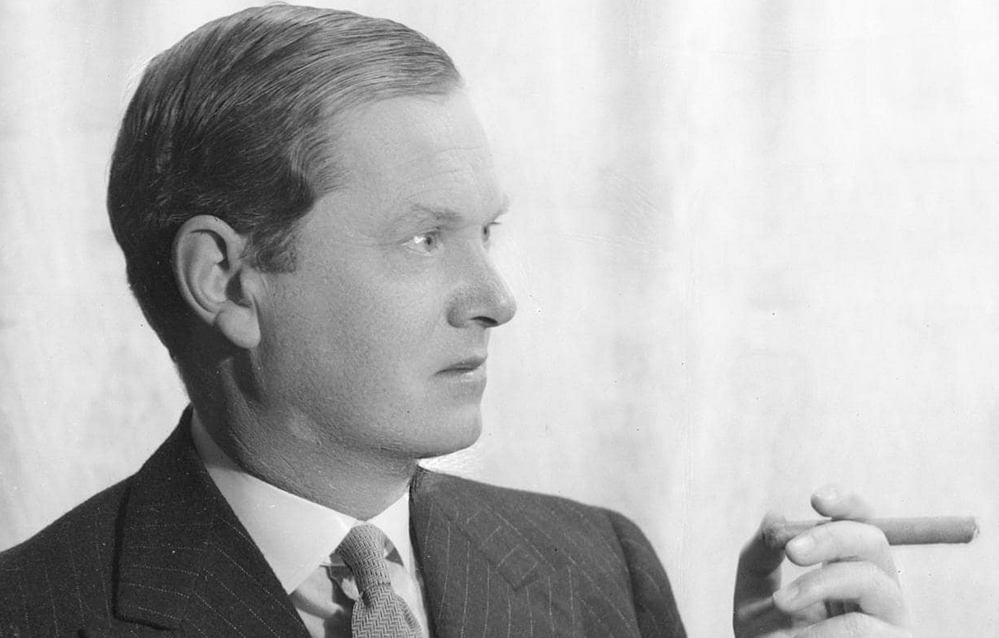 On May 28, 1945, Evelyn Waugh wrote in his diary, “Day of publication of Brideshead. A charming letter from Desmond MacCarthy this morning promising to review it in the Sunday Times.” Seventy-five years ago today.

This promising note from MacCarthy, the doyen of reviewers, the brilliant, elegant eminent man of letters, presaged something special. Waugh’s working title had been Household of the Faith, underscoring his theme of redemption through renunciation, but the other motif is the extinction of tradition in the glamorous form of the aristocratic Catholic Flytes, especially Lord Sebastian, younger son of the Marquess of Marchmain. The scenes of between-the-wars Oxford are an almost dream-like evocation of the author’s own time there. Eventually, Charles falls for Sebastian’s almost identical sister, Julia, and it is this relationship and the death-bed return of her father to Mother Church, that form the denouement. With Brideshead he went for baroque in the lushest, ripest prose he had ever employed.

The superb adaptation for Grenada Television by Derek Granger and Charles Sturridge three-and-half decades later — with its magnificent cast, the spires of Oxford and Castle Howard setting (although it owed more to the Lygon family’s Madresfield in Worcestershire), Geoffrey Burgon’s majestic score; but most importantly Waugh’s barely-altered text — would immortalise the characters and make a cult of what would anyway have been a classic.”

But to the beginning. On January 31, 1944, he confided in his diary “Today, Monday, I came to Chagford with the intention of starting on an ambitious novel tomorrow morning.” He had been granted leave by Lt-Col Bill Stirling, commanding officer of the 2 Special Air Service Regiment, to write a book. The army seemed quite pleased to have an excuse to let him go. A myth persists that he was so unpopular that one of his commanding officers feared he could have been shot by his own men.

The Diaries furnished a fascinating account of the progress of his magnum opus. Over the next five months he wrote – mainly at the Euston Court Hotel, Chagford, on the edge of Dartmoor, a writers’ retreat; but he also stayed at White’s, his London club, and visited wife Laura’s family, the Herberts, at Pixton Park in Somerset. I love his entry for April 16, 1944:

Grace, Lady Wemyss is here. Auberon [his four-year-old son] surprised her in her bath and is thus one of the very few men who can claim to have seen his great-great-grandmother in the raw. I have completed the revision, with many changes, of the first two books of the novel. 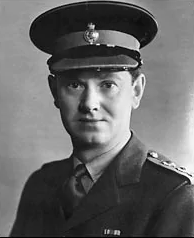 On November 20, 1944, Waugh collected the page proofs, having been dropped by parachute into Yugoslavia, where he was stationed with the Prime Minister’s only son, Randolph Churchill. It was a handy connection. The proofs had come from his publishers via Downing Street. Waugh (in uniform at right) made extensive edits and finished final proof correcting by November 26. He remained in Yugoslavia until the end of February and. after a few weeks in Rome, including an audience with Pius XII, he arrived home on March 15, 1945, two months before publication.

Some fascinating insights on the novel’s reception have been shared in advance (in the January 2020 issue of the magazine, Commonweal) by the eminent Wavian scholar, Professor Robert Murray Davis, who has written an introduction to the novel, (still-to-be published) Volume 9 of the Oxford University Press’s magisterial project, The Complete Works of Evelyn Waugh.

Waugh had fifty advance copies of a special edition distributed to family and friends. As Professor Davis observes, “he had not been this eager to hear responses to a book since his first novel, Decline and Fall, was published in 1928.” His family response was mixed. His mother-in-law, Mary Herbert, a grand Catholic matriarch, thought the book “a great success, but found Lady Marchmain unconvincing”. Her daughter, Laura’s sister, Gabriel Dru thought that “for the first time Waugh had drawn a convincing woman character.”

His best source of what his friends and the cognoscenti thought came from his great friend and favourite correspondent, Nancy Mitford, then  working (well, spending her days) at Heywood Hill’s bookshop in Mayfair.  She dubbed Brideshead  a “Great English Classic,” or “MO GEC.” As Professor Davis puts it:

She wondered if Waugh were on Lady Marchmain’s side and if Ryder “might have a little more glamour” because “he seemed to me a tiny bit dim.” This was the sort of response Waugh wanted, and he explained that Ryder was dim because “it is not his story,” though he admitted that if he were too dim to justify Julia’s reaction to him the novel had failed. As for Lady Marchmain, “No I am not on her side, but God is, who suffers fools gladly; and the book is about God.” 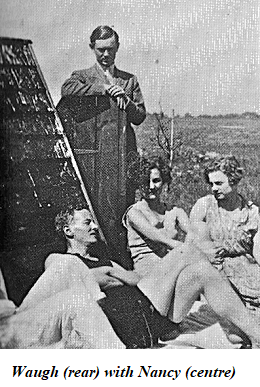 She eagerly shared their circle’s reactions. “General View: It is the Lygon family. Too much Catholic stuff,” Waugh’s friend and favourite priest, the most brilliant convert since John Henry Newman, Monsignor Ronald Knox’s initial response was “I wish Evelyn would write about characters whom one would like to meet in real life”—but, “once you reach the end … the whole cast—even Beryl—falls into place and the twitch of the thread happening in the very bowels of Metroland is inconceivably effective.” The Monsignor was so affected by Julia’s monologue on sin that he proposed to quote it to the clergy of Westminster Cathedral on their ‘Day of Recollection’. Knox and Waugh’s friend-in-common and fellow convert, Daphne Acton, considered the book a masterpiece. Christopher Sykes, later Waugh’s biographer, enjoyed Sebastian and the aesthete, Anthony Blanche, but mischievously predicted:

Feeling is running high about it. ‘Roman Tract’ is being hissed in intellectual circles…. [Cyril] Connolly is very upset…. The New Statesman will never forgive you for your crimes against taste: No miners, no mention of communism, no strictures on the house, and your obscure and constant references to the nobility.

As to the press reaction, Desmond MacCarthy was positive. His only reservations – the soliloquies of Julia at the fountain and her father, Lord Marchmain, on his deathbed, which he thought overwrought. As Professor Davis noted, “Waugh admitted that both were stunts but that he could not at the time have used any other method. Next time he might do better because “I feel sometimes I am getting the hang of writing.” MacCarthy’s other queries were Charles Ryder’s indifference to his children; Ryder’s ability as a painter; and why Lady Marchmain was a bad mother. Waugh admitted his depiction of Charles’s parenting “artistically indefensible” but when one looks at Edward Ryder’s chilly perversity and even the author’s professed attitude to his own children, is it so strange?  As to Theresa Marchmain, he conceded that “his characterization of Lady Marchmain was a failure because she was more type than person, although a recognizable type”.

The Spectator’s V.C. Clinton-Baddely, in a rather brief notice in June 1945, regarded the novel as “his most ambitious novel and his best.” Clinton-Baddeley thought that Sebastian, “the melancholic dipsomaniac”, was never a very entertaining character but, unlike other critics, Julia’s story was “told to perfection.” Although the theme was “a deeply serious one”, Clinton-Baddeley noted that it was “accompanied by a brighter wit and a more sudden laughter than you will find in any other novel of these last anxious years.”

Across the pond on December 30, 1945, John Hutchens, writing in The New York Times, praised Brideshead as ‘his finest novel” by “an artist, with something like a genius for precision and clarity not surpassed by a novelist writing in English in his time.” Strikingly at odds with Wilson, Hutchens writes:

What is quite new is a leisure, spaciousness of style and structure. One sentence and one paragraph after another, of reflection and description, could have found no place in the staccato atmosphere of his other works. By comparison with them this is a full-bodied play to a deft vaudeville sketch. 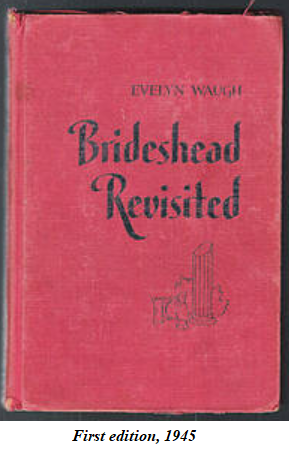 But those who disagree with him on religious or political grounds, or both, will have a time for themselves in trying to prove that his beliefs have marred his literary artistry.

But just a week later, the New Yorker’s Edmund Wilson, a warm admirer of Waugh’s (“the only first-rate comic genius who has appeared in English since Bernard Shaw”), drew a sharp line between the early novels and Brideshead. He called it “a bitter blow”. While he thought the early chapters “felicitous, unobtrusive, exact”, the last scenes were “extravagantly absurd”. Wilson, an atheist, was especially appalled by the conversions of both Lord Marchmain as he crosses himself, and Charles Ryder falling on his knees to pray at the bedside.

What has caused Mr. Waugh’s hero to plump on his knees isn’t the cross but Lord Marchmain’s aristocratic prestige.” Waugh’s friend, fellow novelist Henry Green, agreed, “how shocked & hurt I was when the old man crossed himself on his deathbed” and thought that “you may have overdone the semicolons a bit yet even then the regret with which the whole book is saturated, is beautifully carried out in the long structure of your sentences. The whole thing seemed deeper & wider than any book you have written.

Wilson missed the anarchy of the early Waugh “that raised its head — boldly, outrageously, hilariously, or horribly” while the religion that is “invoked to correct it seems more like an exorcistic rite than force of regeneration.” But as Ann Pasternak Slater has written more recently it is this revelation that is the point of the novel. Wilson sadly predicted that the novel will prove to be the most successful, the only extremely successful, book that Evelyn Waugh has written…” Of course, Waugh’s response to the review of his erstwhile admirer was “I am glad we have shaken off Edmund Wilson at last.”

Despite the mixed reviews, it sold phenomenally, especially in the United States, despite Waugh’s claim that no more than six Americans would understand. He joshed with his friend, Lady Mary Lygon, that “my book has been a great success in the United States which is upsetting because I thought it in good taste before and now I know it can’t be.”

And strangely, as its popularity endured, he professed to be less happy with his magnum opus. Almost embarrassed, he revised and rewrote some passages fifteen years later. Interestingly, he restored the original, rather florid scene on board the transatlantic liner when Charles ravished (took possession of?) Julia. (He had toned it down to please Ronald Knox in the 1945 edition but his Right Reverend friend died in 1959.) But for the rest, in the preface to this later edition (1960), he admitted,

It was a bleak period of present privation and threatening disaster, and in consequence the book is infused with a kind of gluttony, for food and wine, for the splendours of the recent past, and for rhetorical and ornamental language which now with a full stomach I find distasteful…… It was impossible to see, in the spring of 1944, the present cult of the English country house …so I piled it on rather, with passionate sincerity. Brideshead today would be open to trippers, its treasures rearranged by expert hands and the fabric better maintained than it was by Lord Marchmain.” Waugh allowed, “Much of this book therefore is a panegyric preached over an empty coffin. 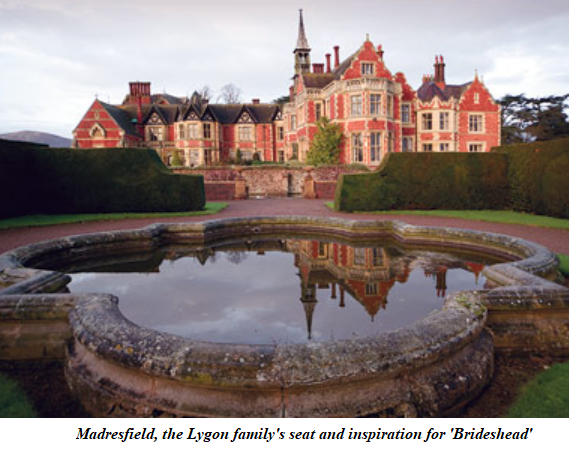 That coffin may well have been empty, but in 2020, a time of angst and uncertainty when one looks for permanency and perhaps something otherworldly, there is still much in this panegyric, even for those who have heard it before, to justify revisiting.

Do Not Resist Us!