Trigger Warning: A Story Not Quite True

So the Swedish government is arranging courses on sniping for its young Islamic  arrivals, to help them mingle on the range with locals and boost their Swedish language skills. This is the story doing the rounds on the blogophere. True? False? Crazy nonsense? You be the judge. Please remember Quadrant Online always provides nuanced coverage and does not regurgitate internet hoaxes.

The original story about the sniper-training is a nicely-illustrated spread in the Swedish newspaper  Allehanda. This is a real newspaper, circulation around 70,000. It previously gained some éclat in the West for publishing a cartoon of  Mohammad as a “roundabout dog”, a form of public art which Swedes seem to enjoy. This caused much Islamic offence and the standard reaction of Religion of Peace adherents: protests, threats, bombings, attempted assassination of the artist etc. 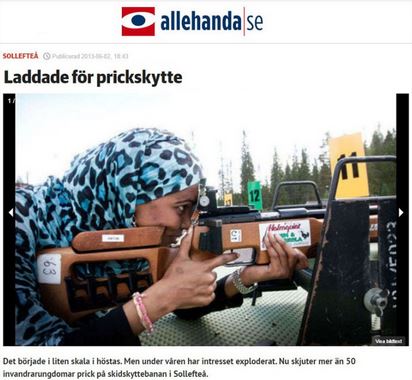 The Allehanda story (right) about the “sniper training” for happy-go-lucky Islamic teens is dated June 2, 2013. It’s  an oddity that it laid doggo (no pun) all this time. The headline is “Laddade för prickskytte”, the first word google-translating as “charged (up)” and the third word, “sniping”. It is more precise than the word for “shooting”  (skytte) or “target practice” (tävlingsskytt).

But because of the recent fuss, the Allehanda news editor has now issued this clarification:

“Because of the recent international citations of the 2013 Allehanda article ‘Laddad för prickskytte’, I as News Editor feel that a few clarifications are in order. Several websites refers to the immigration project in Sollefteå as ‘sniper training’. This is not a correct description. The word sniper training implies military combat education which is something completely different from this.

Although the refugees in the pictures can be seen holding what looks like sniper rifles, it is in fact biathlon sports equipment. Biathlon is since the 1960s recognised as an Olympic discipline, and the Sollefteå Ski High School runs an international upper secondary school programme for elite competitors. This is where the refugees were invited to try rifle shooting, the only element of biathlon possible in the summer. It was done by the authorities as part of their work with local immigration. I hope this clarifies the circumstances surrounding this article.”

So really, the Swedish government has only been training young Muslims to aim well at inanimate targets and miss as few times as possible. This is not the same as actually training them to be military-grade snipers a la Chris Kyle of American Sniper fame.

By now you’re wanting to know how the newspaper’s body (no pun) text runs. Here goes, via google translate:

“It began on a small scale in the fall. But in the spring, interest exploded. Now more than 50 immigrant youths shoot dot [target] on the biathlon course in Sollefteå. [Central Sweden]

Maria Ibrahim loading rifle and lies down on the green rubber mat. She is aiming carefully and long before she pushes against the classical target of five black dots.

The white caps fall into place one by one. Five hits out of five possible.

– ‘It’s fun to learn how to shoot, and we have fun together. We laugh a lot. If this continues into the fall, I will certainly be with [it]!’

Over 50 young immigrants have found the biathlon track at Hallstaberget. His Nauclér, which holds the course together with Björn Lindblom and Birgit Höglin, is very satisfied.

– Already at the sample meeting in March, more than 50 young people from all over the world – Syria, Afghanistan, Africa, South America. And it has persisted. They are interested and very talented, and some come from war-torn areas [but have?] never been a problem.

All the young people go to the individual program in upper secondary school, focusing on languages. Teacher Birgit Höglin points out several advantages.

– ‘It’s much more than the sport itself,’ she says.

– ‘Here they talk Swedish in other social contexts, meet new people and hang out in other forms. It is good especially for the vocabulary. Moreover, it is sure discipline and security, and is also a useful experience.’

–   ‘Safety is very important. We take that very seriously, he says.”

It is heart-warming to think of how interested and talented these teens are in putting bullets into targets as a purely sporting recreation, learning Swedish phrases like, “Bang on, good show!”

The course – which may or may not be   on-going – is/was funded by Sweden’s Migration Agency. There are no details of subsequent careers of the shooting-course graduates. Leftist bloggers pooh-pooh the implications of the story.  As one Lev Raphael put it on HuffPost,

It does not mean learning to be assassins, snipers or terrorists. I’ve taken target practice and that’s hugely different from training to be a sniper, which is immensely more complicated and involves a lot more than aiming at a paper target.

Would a story like this be kept quiet by the major European media? Not one European news site like Der Spiegel, Le Monde, or The Guardian has reported it.

Because it’s bogus… that, of course, isn’t dramatic or scary at all.”

Given that the German press, for example, could avert its eyes from 500 sexual and other assaults on Cologne’s New Year’s Eve, I don’t think the mainstream media’s avoidance of the sharp-shooting training story is all that remarkable.

The internet is riddled with illogical, crazy material that sane person would believe for one instant. However, sometimes this stuff is true.

Tony Thomas blogs at No B-S Here, I Hope

[i] Roundabout dogs, involving some sort of Swedish pun, are improvised and vaguely ironic  dog sculptures that Swedes like to decorate roundabouts with.

More Farce Than Class at the ABC