With the National Energy Guarantee (NEG), Australia is locking itself into more and more intensive greenhouse gas emission restraints, when the Paris Convention that is the supposed framework for such action is falling apart.

Of the nations which signed on to the Paris Convention, only the developed countries have any commitments to take emission restraining measures, at least for the next 12 years.  Led by China, at 30% of emissions, the developing countries, including India, the Middle East oil producers and the former USSR, account for some two-thirds of emissions.  Those signing on to restraints account for only 30%. 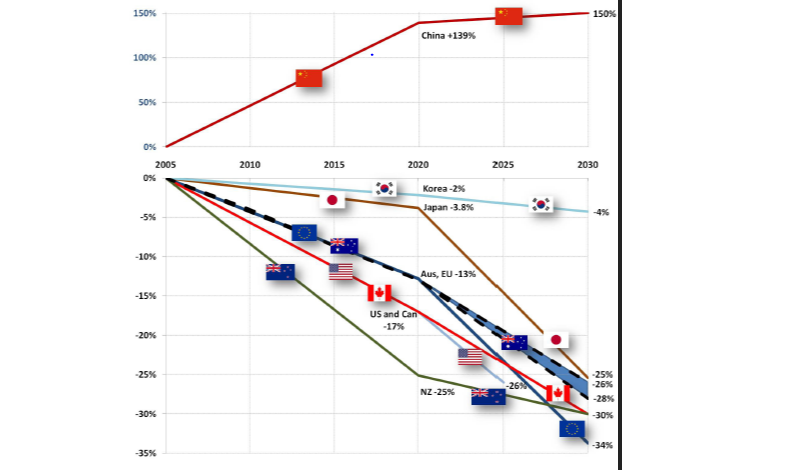 Almost half of the emissions being restrained under the agreement are from the US.  But the Trump administration has revoked the US signature and is dismantling programs that favour renewables or discriminate against coal. Last week, Canada’s biggest province, Ontario, elected a government with an overwhelming conservative majority.  The new provincial government’s policy is to dismantle all the emission control measures that its Liberal predecessor put in place.  In the process this is undermining the California-led coalition of states that are implementing a carbon tax.

The Trudeau government is scheduled to face an election on or before October, 2019, which it must not now be confident of winning.

For its part, Japan (after the US and EU, the largest emitter entering into meaningful restraint “commitments”) has adopted a policy of pure pragmatism, and having opened eight new coal power plants in the past 2 years is planning for another 36 in the coming decade.  Japan clearly puts any obligations under the Paris Convention as secondary to the achievement of low cost, reliable supplies.

Cracks are even appearing in the EU, which along with Obama was responsible for the Paris Convention. The situation in Italy is unpredictable and the eastern members led by Poland are opposed to measures that increase their costs of coal. Now we are seeing Angela Merkel, the EU’s most resolute promoter of abatement policy, under pressure.  Energy minister Peter Altmaier is rejecting calls to increase abatement restraints while Merkel is facing opposition from other quarters within her coalition as a result of her disastrous immigration policy.

The Australian 2015 commitment to the Paris Convention was

“Under a Paris Agreement applicable to all, Australia will implement an economy-wide target to reduce greenhouse gas emissions by 26 to 28 per cent below 2005 levels by 2030. ”

The commitment is therefore no longer in place purely as a result of the US developments. However, far from seeing the growing fragility of the Convention as a cause for caution, Josh Frydenberg has been forced by the public service into an intensification of the policy which the government set in place.  Instead of focusing on the 2030 target, the Minister is seeking to introduce an annual progressive staging towards that goal.

Nowhere does the Australian statement in agreeing to measures discuss any trend to the 2030 target.  It does say,

“Government will ensure that policies used in the post-2020 period are efficient and complementary with one another, and are appropriately calibrated towards achieving Australia’s 2030 target.”

While the policy taken to Paris as Australia’s target talks of reductions of 26%t by 2030, the policy is now to effect an annual transition gradually building up to this level.  In other words, policy formerly envisaged a calibration of measures, but the policy as enunciated now has a calibration of emissions year by year building up to the 2030 goal.  As well as cutting off costly options to flexibly respond to the (near certainty) that the Paris Convention will collapse, the new proposal is far more onerous.

Moreover, all the green politicians, public servants and subsidy-seekers maintain that soon — if not already — renewables will be cheaper than coal.  Does it not make sense, therefore, to backload the emission reductions to take advantage of the supposed cheapening of renewable sources?  In doing so we could achieve low emissions and economic savings at the same time.  One date for doing so would be 2028, when the NSW stations of Liddell and Vales Point could be closed and replaced by the much vaunted “cheaper “wind!

The NEG itself is often claimed to be “technologically neutral”.  Under the present situation we have essentially two prices:

The NEG requires electricity retailers to ensure their supplies conform to a specific (and on the new interpretation) a progressively declining level of greenhouse gas emissions.  What this will mean is an infinite number of different prices for electricity depending on the source and the greenhouse gas emissions per unit of output.  It will increase the demand for, and hence the price of, wind and solar compared to coal and gas.  And, as each generator has a unique carbon footprint, there will be a diversity of prices.

We are, therefore, reintroducing the carbon tax as a price on carbon and adding a new complexity into the electricity market. Unless renewables have a sudden fall in costs — pigs might fly too — the average price to households and businesses will increase.

It is easy to see why this economy-wrecking policy has been put into place.  The original carbon tax was introduced by Julia Gillard and devised by the then-Secretary of the Climate Change Department Martin Parkinson.  Malcolm Turnbull, as leader of the Opposition, supported that policy and after refusing to reconsider, was defeated on the issue by Tony Abbott.  Parkinson was promoted to the Secretary of Treasury.

On becoming Prime Minister, Tony Abbott, in line with his commitment, repealed the carbon tax.  After a decent interval he also fired Martin Parkinson.  On his return to The Lodge, Turnbull appointed Parkinson to head up his own department, from which position he has dictated energy and climate policy.

The industry itself has seen considerable benefits from the government intervention into the electricity market – the doubling of prices has massively benefitted incumbent generators, both fossil and renewable.  The costs of additional complexity will be passed onto customers and the complexity itself will be something of a deterrent to pesky new entrants.  The energy user loses but has very little of a voice.

Alan Moran of Regulation Economics is the author of “Climate Change: Treaties and Policies in the Trump Era”.

4 thoughts on “NEG: Standing Fast on a Sinking Ship”

COVID Statistics by Dummies for Dummies