On a summer evening in July 1927, an artist went for a walk outside the city of Ypres, Belgium. By chance, he spoke to a passerby whose words inspired his best-known painting, a work that symbolically brought fact and meaning together. Will Longstaff, born in Australia, had been living with his wife and two children in the English countryside since the end of the First World War, painting portraits and ‘unambitious views of the Sussex landscape’. He left Australia in 1915, like many thousands of others, to serve in the war, and ended up using his artistic skills to paint camouflage for guns and equipment in the lead-up to the final Allied offensive against Germany.

On his evening walk he met Mary Horsburgh. They had both come to Ypres for the dedication of a great memorial to those missing in action. During the war, she had worked as a volunteer in a military canteen, 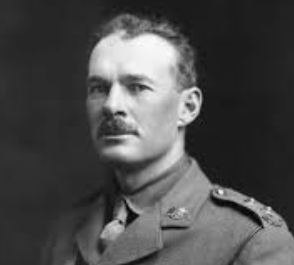 serving soldiers as they set out from the shattered city of Ypres towards the front line. That summer evening she was alone and pensive, and Longstaff (right) asked if he could help her. ‘No, I just want to be with my dead boys. I can feel them all round me,’ she replied. Her words excited his imagination, and on his return to London he painted the imposing image (nearly 1.4 metres high and 2.7 metres wide) of Menin Gate at Midnight in a single session. Artistically, he sought to gather in the sadness of countless deaths and mourners, and bring them, symbolically, to a single place of memory and resolution.

The Menin Gate Memorial at Ypres that Longstaff painted in his picture was a most unusual monument. Neither cemetery nor triumphal arch, it created a final resting place for the missing soldiers. Their names are engraved into stone panels, on the outside and the inside of the building.

Symbolically they have been raised out of oblivion in the ground and held up to the light where we can be with them:

It is a memorial…offered not to victory, but to the dead: the victims, without … distinction, to the fallen Australians, English, Hindus and Mohammedans who are immortalised to the same degree, and in the same characters, in the same stone, by virtue of the same death! Here there is no image of the King, no mention of victories, no genuflections to generals of genius…

The exterior suggests a Greco-Roman temple; its high archway resembles the entrance to a mausoleum and the interior of the barrel-vaulted structure echoes elements of the Pantheon in Rome. The structure itself connected heaven and earth, a place where the living could leave their tributes to the dead. Every evening since the Memorial was opened, except during the German occupation, buglers have sounded the Last Post, 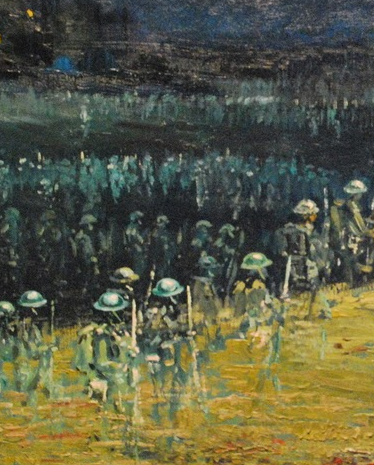 a signal that the sentries had been posted and the camp had been secured. This final ritual of honour and remembrance offered rest and resolution. Opening the Memorial in 1927, Field-Marshal Lord Plumer declared: ‘He is not missing. He is here’.

In the moonlight of the painting, you stand in open country with what seems from a distance to be a field of wheat with poppies in the foreground. Drawing closer, the standing sheaves reveal themselves as spectral figures in uniform and steel helmets, carrying rifles and backpacks. The whole countryside is on the move, as the spirit soldiers march down from the horizon, across the fields and away from you towards a bridge that crosses a moat. The vanguard goes through a grand archway, topped by an indistinct sculpture, and into a monumental building like a temple, set against a rampart wall shining in the night.

The soldiers do not look at you. Their bodies and their faces remain invisible, and they bear no insignia of nationality or rank. They are the presumed dead of Great Britain and its Empire, 54,395 missing soldiers on this battlefield alone, including more than 6,000 Australians, whom the painting honours and the monument keeps in memory.

The next of kin remembered the letter that told them of their soldier’s disappearance; not necessarily killed, perhaps taken prisoner or temporarily separated from his regiment. Six months could pass in searches or inquiries made through neutral countries whether the enemy had captured him. Then, if the waiting proved fruitless, he would be presumed legally dead.

The rituals of death could then unfold, but only incompletely, for those who mourned. They would not see and could not kiss the face they loved. They never witnessed that his earthly life was over. Where did he die? Was it quick or did he linger on for hours alone in pain and loneliness? They could not have the body washed and shrouded, and put into a casket to protect it. Was the missing body drowned in mud, blown apart or rotting on barbed wire? The spoiling of the body was once reserved for traitors — castrated, disembowelled and hacked apart. Was the one they loved in similar condition? They could not have the casket at the funeral for family and friends to mourn, to say a prayer and bid farewell. They could not bow their heads when his spirit was committed to God and his body to earth or fire. There was no grave or garden for the missing and no place for the living to put their flowers. Answerless questions haunted many of the bereaved. The fragments of their missing loved one’s story ruptured fact and meaning. The wife could not become the widow that she was; the parent could not let the son depart nor the child let go its father’s hand. Some other rite or symbol was required to resolve the loved one’s story into the mourner’s own.

Spiritualists sold the chance of talking to the dead. One of their promoters, Sir Arthur Conan Doyle, the celebrity author of detective Sherlock Holmes, claimed:

…the wisdom of the dead could tell us about their own conditions, their present experiences, their outlook upon the secret of the universe, and the testing of religious truth from the viewpoint of two worlds instead of one.

Spiritualism came into vogue from about 1840 in Europe and America, though it delivered no knowledge, secrets or testing of truth that anyone could specify. After the war, it found new listeners among grieving and damaged people. In 1920-21, Sir Arthur conducted a spiritualist lecture tour in Australia, a nation of just five million, hard hit by war. More than sixty thousand had been killed; one third of them were missing. Sir Arthur’s lectures were well attended. He even met Australia’s Prime Minister and Cabinet. Grateful people wrote him letters. A woman showed him a stone which a spirit brought to her in New Zealand, all the way from her son’s grave at Gallipoli, in Turkey.

Sir Arthur did not impress everyone. The churches deplored his mission. Doctors warned about the dangers of spiritualist inquiries to those whose nervous systems were badly shaken. A newspaper columnist wrote:

…he seeks to impose upon the world a cult which gives an open door for mediums and sitters alike to pass into a chamber of horrors, over the portals of which are written ‘mental, physical and moral ruin’.

Spiritualists generally depended on professional mediums, people who earned their living by contacting the spirits and bringing them to life at seances. Frauds and hoaxes were endemic. In 1921, a Melbourne newspaper reported a divorce case where the husband told his spiritualist wife he had received a spirit’s message that her life was in danger unless she stayed away from home. She moved out, and his mistress moved in. Clever tricksters deceived even Sir Arthur from time to time.

In the seance room, the light grew dim or dark, and the sitters and the medium turned towards the underworld. No light perpetual shone there. Those who had commended their loved one’s spirit to God at the funeral, now withdrew that prayer at the seance. They tried to break into the afterlife and bring the spirit back into their world. A danger surfaced, less often mentioned, but possibly more perilous. Demonic spirits may have come at the medium’s call and refused to be dismissed. Even to this day, honest people tell strange stories of haunted places, strange noises in the dark, sudden coldness and sinister apprehensions. Troubled people talk of hidden cameras and mind-controlling radio waves. Levelheaded people say ideas entered their head, something got into them or they acted as if possessed. If you reject the seance, is that just from disbelief or from a premonition that it goes beyond the bounds of anything humane and stirs up something that was better left alone?

Will Longstaff’s painting Menin Gate at Midnight struck a chord. He painted a story of the missing soldiers coming back to rest at last in the memorial at Ypres, not to haunt the living anymore. At last there was a proper place of mourning and a proper resolution of the soldiers’ story. The widows, parents and the children could now become fully what they were, and accept the dead men’s memories into their own. People crowded in to see it in London, Manchester and Glasgow. It was shown at Buckingham Palace by royal 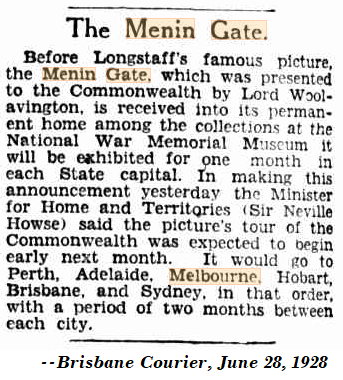 command. Lord Woolavington, formerly Sir James Buchanan, a wealthy whisky distiller and philanthropist whose wife had nursed wounded soldiers in London hospitals, bought the picture for £2,000, perhaps £300,000 in today’s money and double the price of comparable works. Woolavington gave it to Australia.

The painting toured in every Australian State. Every exhibition drew large crowds, and seasons were often extended. In Perth, a city of some 163,000 people, the public art gallery recorded 100,000 visits. Across Australia by September 1929, at least 250,000 people had seen it.

There was no rush at the doors but a quiet stream of people passed in and out. A majority were women, most of them elderly. They came in noiselessly and sat looking at the canvas. They seemed to be searching the spaces between the shadowy, helmeted figures for someone there. Now and again a returned [serviceman] came in, bared his head, looked for some minutes, and went away.

Very few Australians could have afforded a 17,000 kilometre voyage to the Menin Gate memorial itself, but  the painting offered the chance of a pilgrimage sacred to memory. Travelling to see the painting, or obtaining a reproduction, was akin to a pilgrimage itself. At the end of its tour, the painting entered the permanent collection of the Australian War Memorial in Canberra, and remains very popular to this day.

The painting is faithful to the meaning of the memorial at Ypres. It was not a spiritualist creation. Longstaff is reputed to have told a group of friends that the only spirits that influenced him came out of a bottle. It is not an icon blessed by the church. It is an analogue. It shows the story that the monument embodies — that the missing soldiers have been lifted out of the ground, their dismembered bodies made whole and clothed with their helmets and their kit and brought back out of chaos into the shelter of a city through the Menin gate. You do not break into their world through mediums and seances, but you find them in the temple. Each evening the bugles sound that the sentries have been posted, the missing have been found and their names have been raised incorruptible.

Missing in action: Chris Baker, ’What happened to a soldier who died?’, The long, long trail, blog at https://www.longlongtrail.co.uk/soldiers/a-soldiers-life-1914-1918/what-happened-to-a-soldier-who-died/

The pilgrimage to the painting and enduring popularity: John Stephens, ‘’The Ghosts of Menin Gate’: Art, Architecture and Commemoration’, Journal of Contemporary History, Vol. 44, No. 1 (Jan., 2009), pp. 24-25

The pilgrimage to the painting and enduring popularity: John Stephens, ‘’The Ghosts of Menin Gate’: Art, Architecture and Commemoration’, Journal of Contemporary History, Vol. 44, No. 1 (Jan., 2009), pp. 24-25