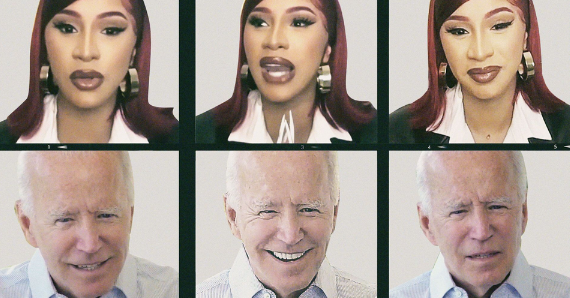 Some will defend it simply on the basis that success alone justifies itself. At nearly 65-million views on YouTube in less than two-months, the song is a social-media marketing phenomenon. Maybe that’s why Joe Biden decided that his only sit-down interview to date should be with Cardi-B (although, given Joe’s mental state, it may well be that he thought his interlocutor was Oprah. Who knows? Certainly not Joe.) In case you missed it take a look at Candace Owen’s epic take down of the singer’s vacuous questions when speaking to Ben Shapiro.

Liberal-progressives have waxed rhapsodic over Cardi-B’s song and declared it as being, somehow or other, sexually empowering for women. For instance, of a song that graphically describes what would be described as sexual abuse were the singer not so keen on the serial humiliations she begs for,  The New York Times wrote:

Yes, sure, “WAP” is salacious, bawdy, unerringly humid, vividly detailed. Perhaps distractingly sordid, if you’re unfamiliar with the work of, say, Trina, or Madonna, or Philip Roth, or Jeanette Winterson, or Egon Schiele, or Bernardo Bertolucci, or Dr. Ruth Westheimer, or Call Her Daddy.

But it is also emblematic: Sexual confidence and forthrightness are now the norm. Men rap and sing about sex in preposterous and sometimes awkward detail all the time, and rarely does anyone blink. It’s beyond time that the same courtesy is extended to women.

The conflagration over “WAP” has been predictable and fatiguing — the morality police working overtime against the sexual agency of Black women, a resurgence of shaming and grievance that felt like a relic of an earlier time.

Yeah, nah. There’s nothing “predictable or fatiguing” about being concerned about the sexualisation of children by them singing lyrics about sexual acts that are so explicit that they can’t be repeated. Rather, it’s emblematic of the broader cultural sclerosis that Ross Douthat addresses in his book, The Decadent Society: How We Became the Victims of Our Own Success. As Douthat explains, especially when it comes to the use of online pornography:

For all that it relies on stimulation, then—on the allure of virtual sex and the thrill of virtual violence—virtual reality in this sense also bears a certain resemblance to the lotus plant encountered by Odysseus in his famous travels. A society in thrall to digital entertainment offers its inhabitants the opportunity to experience savage and orgiastic pleasures on a scale far beyond what the real world could ever provide.

However, Douthat fails to see the more insidious and destructive ramifications of finding sexual satisfaction in the virtual, rather than the real, world. And that is the death of love itself. Just last week Cardi-B filed for divorce with her husband of four-years—a man named Offset—claiming that their marriage was “irretrievable broken”.

While I am in no way trying to attribute blame to either party, it seems that the offer of unrestrained female sexual submission and desire was not enough. This might seem quaint and old-fashioned, but there should be an emotional privacy and physical intimacy that is only known between a husband and wife. That is a large part of what makes marriage special. But when either of those things spills out into the public square, the dissolution of the relationship is sure to follow. There is an old Jewish love song—filled with quite erotic imagery—that declares as it’s central refrain, “Daughters of Jerusalem, I charge you by the gazelles and by the does of the field: Do not arouse or awaken love until it so desires.” (Song of Solomon 2:7)

This is because there is something sacred about sex. That’s why, for instance, part of the marriage vow in the Anglican Book of Common Prayer states, “With my body I worship you.” It speaks of a holy and exclusive use of one’s flesh in service to someone of the opposite sex who is profoundly different but complementary.

The same Israelite king is recorded as giving the following proverbial advice to his young son:

Drink water from your own cistern,
Running water from your own well.
Should your springs overflow in the streets,
Your streams of water in the public squares?
Let them be yours alone,
Never to be shared with strangers.
May you fountain be blessed,
And may you rejoice in the wife of your youth.

Rather than having our youth twerking and spurting the lyrics to a song that profanes the act of making love, we should be inspiring them to a better vision — vision in which women in particular are cherished and esteemed and where the observation and access to one’s flesh is exclusive and precious.

The sky is the limit for this latest NBN debacle

The Vexations of Free Trade