A Letter From Naples

Yesterday I was returning to our nice flat in a very run-down part of Naples near Garibaldi Square, after half a day at the Naples National Archaeology Museum. I decided to detour via the subway system to Montesanto because my map insisted there were some nice palaces there. This detour proved a damp squib because those palaces had disappeared centuries ago, although their names remained.

Eventually, I arrived at the right Montesanto platform for the trip home. It was packed with commuters, as it was about 5pm, and the subway trains are not at all frequent, every 20 minutes or so. The platforms on both sides were  clean, but youths were using my platform edge as seating, dangling their legs above the tracks. After a while one of them,  in his late teens and with red hair, pale skin, a New York University sweater and baggy pants, stood up and joined two mates. One was thin but very tall, the other swarthy and clad in a camouflage top. They were all only a metre or two from me.

The redhead was clutching some tubes, about half the size of a relay runner’s baton. One tube was giving him trouble as he tried to do something with the lid. Was something edible inside? Apparently not, as I next noticed a wad of cotton fall to the platform. He put it back in the tube. I was standing against the station’s  light-green Perspex-style wall. There were dozens of other would-be commuters around me, some standing and others filling seats against the wall.

Still struggling with the cap, the redhead moved to a rubbish bin inches from where I stood  and ground the top of the tube against it. He looked pleased when something blue came out. He took two steps towards the wall, between the bin and the first row of seated commuters.  This was a wall gap of only a metre.

With practised movements, he waved his arm at the wall (I couldn’t quite see what he was doing), stepped back, admired the wall, and took a few steps to the left to rejoin his two friends. They all seemed quite merry and animated.

Someone moved and I could see the wall. Previously pristine for the whole length of the platform, on it now was one of those mindless ‘tags’ — the scribbled letters P,W and C, in a squiggly pattern about half-a-metre square. I now saw that at least two of the trio were carrying handfuls of these tubes, king-sized felt-tip markers.  They made no attempt to conceal them.

I looked at the commuters to see how they were reacting to the wall being defaced at peak-hour right next to them. They would all be fully aware of what had happened but they studiously minded their own business, and acted as though the trio of graffitists was invisible. The trio was clearly on a graffiti mission, and my surmise was that they had been active for an hour or two. Surely, I thought, some of those studying their smartphones would tap out an alert to the station police? Obviously this wasn’t happening.

At that moment the train arrived and those still sitting on the platform edge pulled up their legs.

I found myself sandwiched among the three youths as we boarded. Thankfully they moved down-carriage a bit. From there they kept up a loud banter. I tried unsuccessfully to work out from their talk if they were native Napoli citizens or just visiting. I did make out some variant on ‘chi uccide’ — croaker, killer, zaps or some other unpleasant jargon.

When I stood up to get out at Central Station, once again I was sandwiched among the trio. They ignored me and formed a knot in the crowds heading for the stairs. 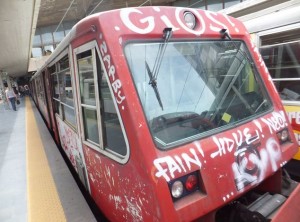 Even now, at Naples’ main station, they flourished their graffiti tools of trade. They moved purposefully, I guessed to some other line where they would continue their evening’s fun. Whatever police or officialdom was present, the trio obviously had no fear of them.

I wonder about it all. They did not seem particularly tough or threatening, although that’s not to say the other train-goers weren’t intimidated: who knows what else besides giant Textas they were armed with? Or were my fellow train-riders utterly indifferent to vandalism on their subway, in broad daylight among crowds?

Melbourne also has its train graffiti vandals, daubing their horrid tags on platforms and carriages and rigorously scratching train windows into an opaque mess. I recall a case a year or two ago where three  such vandals were caught and prosecuted — they had come from Adelaide on a spree  — and in a week or two, had vandalised hundreds of places on our train system. They had operated late at night.

Let’s hope Melbourne never gets to the pass where graffiti vandals do their work openly.

Tony Thomas, frequent contributor to Quadrant Online, is jaunting about Europe, More of his dispatches will follow

The Demolition of Meaning